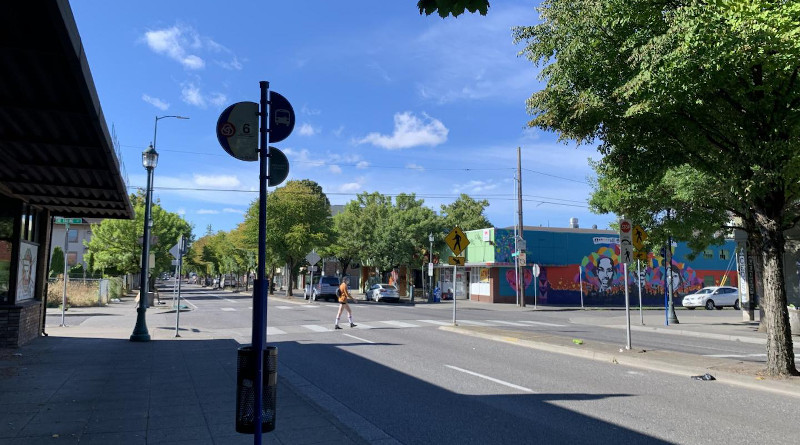 View of North MLK Boulevard in Portland, Oregon with a pedestrian crossing near a mural. CREDIT: Photo by Cait McCusker

The historically Black district of Albina in Portland, Oregon, due to racist real estate practices, faced multiple displacement events between 1960 and 1990 with the construction of Interstate 5 through the heart of the neighborhood as well as wholesale destruction of hundreds of homes to make room for the Memorial Coliseum and various other urban renewal projects.

Gentrification in Portland saw a mass displacement of Black households from Albina, largely to East Portland, a suburban area that was unincorporated county land prior to the 1990’s. As Black people were priced out of the Albina neighborhood, businesses and churches have also closed as a result of losing community members.

Supported by a fellowship from the National Institute for Transportation and Communities (NITC), Steven Howland of Portland State University focused his doctoral research on examining the impacts of gentrification on transportation and social support for black working-poor families in Portland, both those who were displaced to East Portland and those who were able to remain in Albina. Through 27 in-depth interviews with parents of young children (13 Albina residents and 14 residents of East Portland), he sought to understand how they used transportation to make ends meet and how those strategies differ between inner-city and suburban neighborhoods.

WHY DO QUALITATIVE RESEARCH?

Qualitative research plays an important role in equitable transportation policy. How does transportation directly affect people’s daily lives and decision-making? Quantitative data are often used to make policy decisions, yet numbers only tell part of the story. Researchers can gain different knowledge from an in-depth interview than they might learn from a regional survey.

Jennifer Dill, professor in the Nohad A. Toulan School of Urban Studies and Planning and Howland’s advisor, points out that qualitative research has the power to shine light on issues that transportation professionals may have not focused on enough.

“When you’re trying to make change, it’s always great to have a mix of the quantitative and qualitative. It’s people’s stories that help us understand and change minds,” Dill said.

ALBINA: THE EROSION OF A PORTLAND COMMUNITY

“Ferrell’s. Right here it was on Broadway. An ice cream shop. Pietro’s was right next to that. There was like, you know, a couple black-owned businesses that’s gone now. All of them basically are gone now.”

“My son lives all the way out east Portland. So, I’m not going to drive out there. And I have two grandsons that live out that way too.”

Overall, the cultural rootedness of Albina appeared to be eroding as more and more Black people and businesses left and were being replaced by high-end shops, restaurants, and white people.

Despite the significant cultural losses, the residents of Albina had easier transportation (including a higher rate of car ownership), better-resourced and easily accessed social support networks, and a higher density of nearby destinations to get around easier and accomplish more in a day. East Portlanders struggled far more.

“It really felt like the people in Albina, even for those that were still paying market rent, they still seemed on average to be doing slightly better than those living in East Portland. Even with the higher rents they still had a lot of resources nearby that they could tap into,” Howland said.

EAST PORTLAND: A NEIGHBORHOOD OUT OF REACH

“Trying to find shortcuts. Go straight there. I just do my triangle: work, home and school.”

East Portland residents had to go the furthest for all their activities. Clustering of destinations around the western edge of East Portland put groceries, school and other activities out of reach for most residents. The longer distances between destinations meant more time traveling. That extra time meant they could not get as much done in a day as those living in Albina. Support networks for people in East Portland featured a lot of friends and family that had also been displaced, but everything was so spread out that they were more socially isolated. They often had to turn to their network living in Albina for their more critical needs like childcare, but it took a lot more effort to utilize.

GETTING AROUND: RELIABILITY OF DRIVING VS SAFETY CONCERNS ON TRANSIT

“The buses don’t come when they say they’re going to come. You have to wait for the bus, and they aren’t going to stop. If you’re having to be at a place at a certain time you can’t depend on the bus to get you there on time.”

“There was certain jobs that weren’t along a transit line. Maybe a mile or two miles off the line. I didn’t have a car to get there so I couldn’t take the job.”

Howland interviewed participants on how they made choices on getting around, the effects those choices had on their lives, and how they adapted to maintain their mobility. Data doesn’t tell the whole story. The narrative behind the mobility experiences of low-income Black community members often gets washed out or misrepresented in the existing data. By understanding their lived experiences and challenges, policy makers and planners are better equipped to intervene.

Overall, the interviews revealed that Albina residents were more likely to drive than East Portlanders. Both populations shared a preference for driving over transit. East Portland in particular is transit-poor, so the lack of ability to get around without a car has upended many aspects of families’ lives.

“Last time we rode public transportation there’s this dude on there and he was just crazy. Tweaking out really bad. And he kept looking at my son and I’m like, you say something to him I’m going to jail today.”

“My 18-year-old, he rode it all the time…But it’s a point where I pulled up a time I was driving home and I seen this fight going on, on the platform of the TriMet [MAX stop]. This grown man fighting kids. I pulled up and it was my son [one of the kids]. Some Caucasian guy fighting some black kids and the black kids get in trouble.”

Distance and time were factors, of course, that led participants to prefer getting around by driving rather than using transit. Another finding, which Howland had not anticipated, was that safety concerns were also a major deterrent to riding transit.

This was spurred in part by the 2017 racially-motivated murders on the MAX train, which happened the same summer that Howland was conducting interviews. More often however, the concerns had to do with participants’ encounters with people experiencing houselessness as well as people with untreated mental illnesses and addictions, which often spilled over into racists outbursts or threats of violence against them or their children.

Highlights from the Findings:

Albina residents struggled less in their daily life maintenance, giving them more means to own a car.

Albina residents had positive associations with walking, whereas East Portland residents would walk, but with higher cost due to distances and multiple safety issues.

Very few people rode a bike, but it was more common for their kids – mostly limited to Albina.

Marginalized individuals have said that they feel more vulnerable to harassment when biking or riding transit, and research has shown there is racism even at the crosswalk – so it feels like the safest place is in a car. If encouraging car-free travel is a priority, planners, engineers and policymakers need to come up with solutions to make transit, biking, walking and rolling feel safer for the most marginalized.

While East Portland has had a lot of investments in road safety, it is the distance between destinations that has really hurt people’s ability to survive. As East Portland continues to grow with more low-income people of color, more attention needs to go to the urban development of the area to make daily life easier.

Implementing anti-displacement housing policies to prevent the dissolution of a community is key, but with that is also being proactively aware of where people might end up if they do get displaced from a newly gentrified area. Community ties are vital for quality of life, particularly as people get older and the design concepts behind aging in place become more critical to apply to transportation projects.

“It’s nuanced, but recognize that if you can start to identify an area where a lot of people are being displaced to, you need to start implementing plans there as soon as possible,” Howland said.

Howland graduated from Portland State with his PhD in Spring 2020. This summer he received a job offer from the Federal Reserve Bank of Kansas City to be an Assistant Economist. He will be working in their Community Development section doing research informed by community stakeholders.

This research was funded by the National Institute for Transportation and Communities.