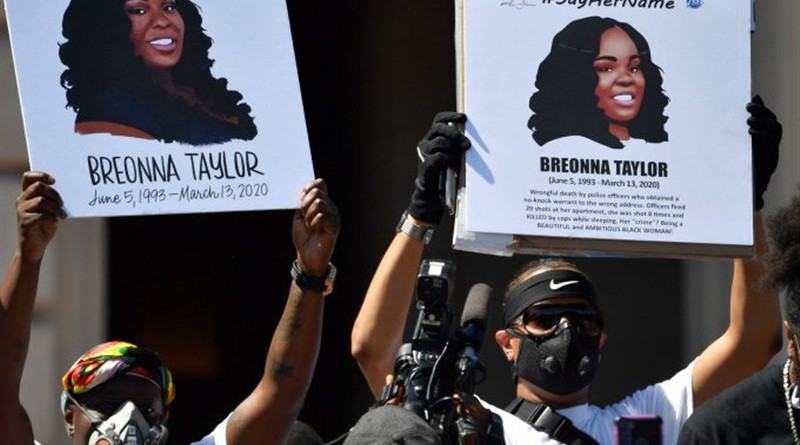 Two police officers have been shot in Louisville as mobs ransacked local businesses. The mob did not get the murder charge they wanted and now are taking things into their own hands. Unfortunately, even organizations such as the NAACP are continuing to allege that Taylor was murdered by the police. They will not accept a reckless endangerment charge for just one officer.

What happened to Taylor was a tragedy, and one can make compelling arguments about the high cost of the war on drugs in America. But the Taylor situation is a poor example of alleged “systematic racism” and “police brutality.” Let’s get the facts straight.

Local officers were investigating Jamarcus Glover on charges of drug dealing. He was Taylor’s ex-boyfriend and they still had some sort of relationship. Taylor allowed Glover to receive mail at her apartment and he continued to frequent the apartment before traveling back to his drug-dealing headquarters. Officers obtained a search warrant for Taylor’s apartment and other locations associated with Glover. The warrant was approved by a magistrate as required by law. Much has been made that this was a “no knock” warrant, but evidence shows that the police did knock and announce before entering the apartment. Unbeknownst to police, Taylor had a new boyfriend with her. The boyfriend was armed. The boyfriend fired the first shot and hit a police officer. The police returned fire. The shots killed Taylor. No drugs or drug-trafficking evidence was found at the apartment.

Again, her death is a tragedy. But it was not murder. Murder is typically defined as “the unlawful killing of a human being with malice aforethought.” Here, police were where they were allowed to be, conducting an investigation, executing a search warrant, and were fired upon by the boyfriend. There was no malice in their actions directed toward Taylor. The one officer who was charged had retreated, taken cover, and fired blindly into the apartment. His reckless shots did not hit Taylor. He was charged with wanton endangerment because his actions manifested “extreme indifference to the value of human life.” This seems appropriate.

Due process was followed in this case. In Kentucky, prosecutors submit evidence to a 12-person grand jury. Nine of the 12 must determine whether there is probable cause for an indictment to go forward. Probable cause means that the accused most likely committed the crime. Probable cause is not a high standard. If prosecutors cannot get a true bill indictment when presenting witnesses in the grand jury with no defense lawyer objecting or cross-examining the witnesses, then the case must be seen for it is: weak and wanting. That’s what the demanded murder charge was in this case. The law simply did not support it.

We can lament the loss of Taylor’s life, but it is reckless to continue to claim she was murdered and a victim of some sort of invisible hand of oppression in America. People who continue to press this narrative are causing more innocents to be harmed, property to be destroyed, and our country to be ripped apart by strife. They need to stop.