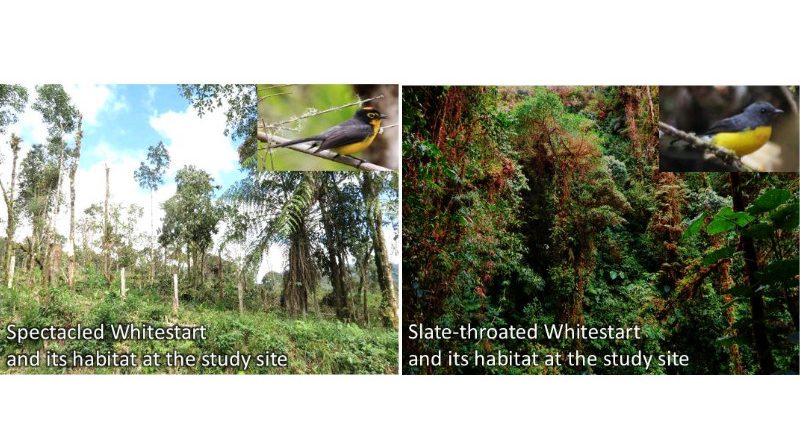 The two species and their habitats at the study site in Ecuador. CREDIT: Photo by Jacek Nowakowski, the coauthor of the original paper at www.nature.com/articles/s41598-020-78804-2

In the mountains across the world, different types of vegetation occur at different elevations creating distinct zones with well-defined borders between them. Each vegetation zone provides specific living conditions for animals. Therefore species that are adapted to habitats created in the specific zone occur only at the specific elevations and do not overlap with other species of similar ecology and behavior adapted to other vegetation zones at different elevations. This zonation is believed to be especially true for ecologically similar species that narrowly specialize to use specific resources and therefore compete with each other if they co-occur next to each other in the same habitat.

However, human activities modify the natural zones and create new types of habitats disrupting the clear natural borders between them. This has consequences for the distribution, ecology and behavior of animals that in a natural situation would rarely co-occur. In the recent paper published in Scientific Reports a team of Polish ornithologists illustrates how those anthropogenic modifications of natural vegetation in the Andes create new conditions in which two ecologically specialized species of birds, that typically occur in different elevational zones, can now co-occur next to each other at the same elevation.

The team of Polish ornithologists, following the long-standing traditions of Polish ornithology in South America since 1800s, have undertook field research on ecology of two warblers in the tropical montane forests of eastern slopes of the Ecuadorian Andes. Piotr Jablonski (Museum and Institute of Zoology PAS & Seoul National University), Jacek Nowakowski (University of Warmia and Mazury in Olsztyn), Marta Borowiec and Tadeusz Stawarczyk (University of Wroclaw) have focused on two very special warblers: the Slate-throated Whitestart, which typically occurs in the Andean montane forests [example of habitat is here and here, and its close relative, the Spectacled Whitestart, which typically occurs at higher elevation in cloud forests [example of habitat is here]. Both species forage in almost identical way: by foraging with outspread wings and tail, and by presenting spots of contrasting plumage during fast pirouetting movements these birds are able to “overstimulate” and to trigger escapes in their prey, which then is pursued and captured in the air. Therefore, this type of foraging is called “flush-pursue” foraging and it has been extensively studied by Piotr Jablonski. Examples of how “flush-pursuers” forage can be seen here and here.

During several visits to the Yanayacu Biological Station & Center for Creative Studies (Ecuador) , the researchers mapped the distribution of territories of the two species near the station in the landscape that contains patches of natural or secondary forests intermixed with pastures and open bushy areas. [aerial view is here ]. “The field work was hard but exciting for us because we are field ornithologists, who value real field work in various exotic locations” mentions Jacek Nowakowski. “We used classical “old-fashioned” typical ornithological methods of field observations based on ornithological skills and perseverance” comments Tadeusz Stawarczyk, who studied Slate-throated Whitestarts in Costa Rica in the past. “It took us three visits until we collected sufficient material” adds Marta Borowiec, who has also studied Painted Whitestarts in Arizona in the past.

The study found that both species occurred next to each other, but occupied different vegetation types. The Spectacled Whitestart was observed in a sunny man-made mosaic of pastures, clearings, and shrubs with small proportion of high trees, all of which created a landscape similar to the high elevation Andean vegetation where the species normally occurs. The Slate-throated Whitestart, was mostly observed in shady and dense forests with high proportion of tall trees. The two species differed relatively little in their foraging technique, but because they foraged in different habitats and locations they seem to co-occur without any direct competitive aggressive interactions. “In the future, we plan to evaluate the idea that the spatial separation of breeding territories between the two species at the study site may be created during territory establishment, when it is possible that the two species respond aggressively to each other’s songs” says Jacek Nowakowski.

This work represents the first quantitative field study that incorporates both, the detailed foraging information and the habitat descriptions in order to evaluate the mechanisms that allows two “flush-pursue” species, that are normally separated in space along the elevation, to co-occur at the same elevation in the Andean landscape modified by man. “Our results illustrate how modern science can benefit from the “good old style” expedition-based intense field work” says Piotr Jablonski.

Europe is once again at a crossroads, and it seems that we’re witnessing Europe’s identity crisis and its inability to