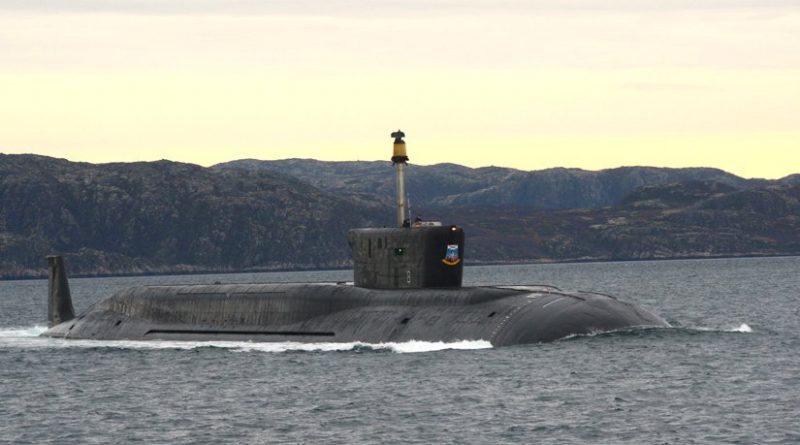 The Russian Northern Fleet’s Project 955 underwater missile cruiser, aka submarine, Yuri Dolgoruky has successfully test-fired a Bulava missile from the Barents Sea and hit all the designated targets at the Kura practice range in Kamchatka, Russia’s Defense Ministry reported on Monday according to Russia’s TASS news agency.

“The Project 955 Borey-class underwater missile cruiser Yuri Dolgoruky has made a successful launch of a Bulava intercontinental ballistic missile from the designated area of the Barents Sea towards the Kura practice range in Kamchatka. The launch was made from the submerged position in compliance with a combat training plan,” the Defense Ministry said.

It is unclear if the Russian launch was in response to any recent US or NATO drills: at the end of May, the Pentagon conducted its first successful test interception of a simulated ICBM attack, modeling a possible escalation in hostilities with North Korea.

“The parameters of the Bulava intercontinental ballistic missile’s flight trajectory were practiced in the normal regime. According to the confirmed data of the registering equipment, the warheads of the intercontinental ballistic missile performed a full cycle of the flight and successfully hit the designated targets at the practice range,” the Defense Ministry said.

The last time a Bulava missile was test launched was on September 27 when the submarine Yuri Dolgoruky performed an experimental salvo launch of two ICBMs from the White Sea towards the Kura practice range in the Russian Far East.

The Yuri Dolgoruky submarine is the Project 955 Borey-class lead vessel. The underwater cruiser is armed with a set of Bulava sea-launched intercontinental ballistic missiles and also with torpedoes. The sub can be armed with cruise missiles. It has a full displacement of 24,000 tonnes, is about 160 meters long and 13 meters wide. The R-30 Bulava is a solid-propellant ballistic missile developed specially for Project 955 submarines. It can deliver 10 warheads of 150 kilotonnes each to a distance of 10,000 kilometers.

In 2015, the strategic nuclear submarine made the National Interest list of the most deadly Russian submarines. This is what it reported:

The fourth-generation Project 955 submarines are equipped with 16 RSM-56 Bulava submarine-launched ballistic missiles with a range of 8,000 kilometers (nearly 5,000 miles). Each Bulava SLBM is fitted with up to ten thermonuclear warheads.

The Borei-class subs “promise to provide the Russian Navy with a potent long-range capability for years to come,” the National Interest noted.

The Russian Navy operates three Borei-class submarines, the flag ship Yury Dolgoruky, Alexandr Nevsky and Vladimir Monomakh. The first two were commissioned in 2013, while the latest one is in active service since December 2014.

The first submarine of the Project 955-A Borei-II class, dubbed Knyaz Vladimir, is expected to enter service in 2017. By 2020, the Russian Navy plans to operate a total of eight Borei-class ballistic missile submarines, three Project 955 subs and five Project 955-A watercraft.

The Borei-class submarines are expected to remain in service for decades to come, at least until 2040.