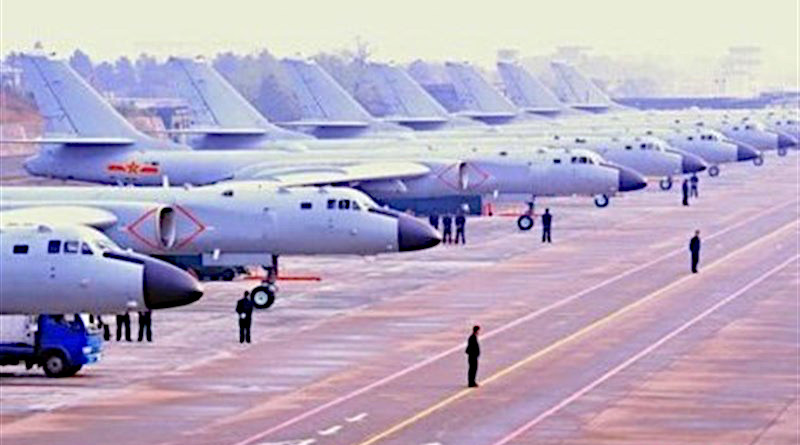 When in November 2013, China surprised Japan, the U.S. and the world by declaring an Air Defense Identification Zone (ADIZ) in the East China Sea https://www.scmp.com/comment/insight-opinion/article/1796488/chinas-potential-security-game-changer-south-china-sea, analysts, media, and US officials warned that the ‘sky is falling.’  They hyped its possible dire consequences and warned that China would declare a similar ADIZ in the South China Sea.

In  December 2013 then US Secretary of State John Kerry admonished China to “refrain from taking similar unilateral actions elsewhere in the region and particularly in the South China Sea.” https://www.scmp.com/news/china/article/1384255/us-warns-china-against-imposing-south-china-sea-air-zone

In January 2014  Evan Medeiros, then Director for Asian Affairs at the US National Security Council said, “We have been very clear with the Chinese that we would see that as a provocative and destabilizing development that would result in changes in our presence and military posture in the region.” http://cc.pacforum.org/2014/05/chinas-maritime-disputes-top-agenda/

In April 17 2015 US Admiral Sam Locklear, then commander of US forces in the Pacific told a US Senate Armed Services Committee hearing that China’s reclamation activities in the South China Sea could provide a “platform for enforcing an ADIZ.”  https://www.scmp.com/comment/insight-opinion/article/1796488/chinas-potential-security-game-changer-south-china-sea

Let’s put the situation in perspective.

The new alarm has been raised by a leak from an anonymous source in the People’s Liberation Army who says that China has been planning an ADIZ there since 2010 to encompass the Pratas, Paracel and Spratly groups of features. https://www.scmp.com/news/china/military/article/3086679/beijings-plans-south-china-sea-air-defence-identification-zone; https://www.rfa.org/english/news/china/southchinasea-adiz-06022020194134.html This does not necessarily mean it will happen or that it is imminent.

Moreover, we need  to understand the bigger picture. Some commentators say that China’s militarization of its occupied features is part of its ADIZ plan and point to the deployment of early warning, and command and control and sub hunting aircraft there. https://warontherocks.com/2020/01/the-conventional-wisdom-on-chinas-island-bases-is-dangerously-wrong/  This may be – but it misses the strategic context of this deployment.

In China’s view, the installations on its occupied islands are an ‘existential’ asset. The South China Sea provides relative ‘sanctuary’ for its second strike nuclear submarines that are its insurance against a first strike– something that the U.S.—unlike China–has not disavowed.

Some of the hundreds of US intelligence, surveillance and reconnaissance (ISR) probes each year focus on detecting, tracking and if necessary targeting China’s nuclear submarines.  Given what it perceives to be the growing US threat to its nuclear submarines, China is building up capabilities on some of the features it occupies to neutralize US ISR and thus enhance the survivability of China’s nuclear submarines in the early stages of a conflict. They may even be able to detect and thus neutralize US submarines. https://warontherocks.com/2020/01/the-conventional-wisdom-on-chinas-island-bases-is-dangerously-wrong/

This is the strategic context.

Now let’s put the ADIZ situation in perspective.  To begin with, there is no international legal basis for such zones and their “rules” – – except perhaps the general principles of “self-defense” and “freedom of over flight”. If there is a contradiction, the former will always take precedence — for any country. Moreover, the establishment and implementation of ADIZs have always been unilateral and controversial.

The U.S. established the precedent of an ADIZ and its rules — for itself and Japan, South Korea and Taiwan – – including in parts of the South China and East China Sea — after World War II https://en.wikipedia.org/wiki/Air_defense_identification_zone.  It thus thinks that all other nations’ ADIZs should be based on its model.  But being first does not justify dictating the rules for all, especially in the absence of an international agreement.

The declaration of an ADIZ is a defensive act and not necessarily destabilizing. There are several possible forms a Chinese ADIZ in the South China Sea could take and they each have different political implications.

It could declare an ADIZ out to say 200 nm (the width of its legitimate Exclusive Economic Zone) but not including any disputed islands or maritime space except the Paracels and possibly Pratas.  That should be grudgingly acceptable to most although its enforcement may create other problems.

As it is now, China occasionally intercepts US ISR military aircraft over its near waters, drawing U.S. protests.  Pratas is claimed and occupied only by Taiwan so China could refer to the “One China Policy” to explain including it.

The inclusion of the Paracels (also claimed by Taiwan) would of course rile Vietnam. But China has occupied and administered the Paracels since 1974.   Although China’s claims and occupation there are vehemently opposed by Vietnam, declaring an ADIZ that includes the islands does not by itself seriously alter practical reality.

Another problem might be the content of the ADIZ regime it declares – if it does declare one.   China’s South China Sea ADIZ would most likely contain similar rules and regulations to the one it established in the East China Sea.  This includes a controversial requirement of prior notification for foreign aircraft entering the ADIZ even if they are only transiting it and not destined for China’s territorial airspace. But Japan has a similar requirement for Taiwanese aircraft entering its ADIZ and so do Australia, and South Korea for foreign aircraft entering their ADIZs. https://en.wikipedia.org/wiki/Air_Defense_Identification_Zone_(East_China_Sea)#_Japan; https://www.google.com/search?q=japan%27s+adiz&rlz=1C1SQJL_enUS881US881&oq=japan%27s+adiz&aqs=chrome..69i57j0l7.4051j0j7&sourceid=chrome&ie=UTF-8

The U.S. objects to China’s requirement of prior notification for aircraft only transiting the zone and not destined for its territorial air space. It claims that it only applies its own ADIZ ‘recommendations’ of prior notification  to civilian, not military aircraft, and that they only apply to aircraft destined for US territorial airspace.  In practice, however, the U.S. monitors and often intercepts with fighter jets both civilian and military aircraft in its ADIZ that do not identify themselves and their destinations – – and the warplanes accompany them until they change course away from its territory.

This has been particularly so regarding Russian Bear bombers flying in the US ADIZ off Alaska and California –regardless of whether they are flying on a course to enter U.S. territorial airspace.  The U.S. is splitting legal hairs but the practical effect is the same.

China argues that its East China Sea ADIZ rules do not “affect” normal commercial traffic and that they do not interfere with freedom of over flight. This aspect certainly requires clarification and reassurance. But so far, in practice, China has not demonstrated any such intent. Indeed, it has only monitored and observed foreign military aircraft flying unannounced in its ADIZ —following the same practice as the U.S. and Japan.

A China ADIZ over its near waters in the South China Sea – especially excluding the Paracels – or at least the excess area inside its illegal closing lines around them – would not necessarily be a ‘game changer’.

An ADIZ is not a declaration of sovereignty. No country has claimed this linkage. In fact China has said that an ADIZ is not “territorial air space” and “has nothing to do with maritime and air jurisdiction”. https://thediplomat.com/2013/12/china-is-surprisingly-ok-with-south-koreas-new-adiz/

However, a Chinese ADIZ that includes some disputed Spratly features and their ‘adjacent waters’ would play into the U.S. narrative that China wants to control the South China Sea including its air corridors and sea lanes and is a threat to ‘freedom of navigation’.  But the Philippines already has an ADIZ encompassing some of the disputed features. Overlapping ADIZ’s exist elsewhere without kinetic conflict. In 2010 Japan extended its ADIZ westward to overlap part of Taiwan’s ADIZ. In 2013, South Korea extended its ADIZ southward to include submerged rocks claimed by both South Korea and China. South Korea’s ADIZ also overlaps part of Japan’s ADIZ.

Moreover declaring an ADIZ is different from enforcing it.  Although the commercial airlines of many nations – including those from the U.S.– abide by China’s ADIZ regulations in the East China Sea, Japan’s airlines do not comply and neither do U.S. military aircraft—both with relative impunity.

China declared its East China Sea ADIZ partially in response to Japan’s nationalization of the Senkaku/Diaoyu Dai features there. https://www.rfa.org/english/news/china/southchinasea-adiz-06022020194134.html

Whether China declares an ADIZ in the South China Sea depends in good part on the behavior of the U.S. At the time of its declaration of an ADIZ in the East China Sea, a spokesman for China’s Foreign Ministry stated that “generally speaking China does not feel there is an air security threat from ASEAN countries and therefore does not feel a need for an ADIZ”. https://thediplomat.com/2014/02/tensions-set-to-rise-in-the-south-china-sea/  But as the frequency, capability and provocativeness of US ISR probes increase, China may perceive the need to protect itself against the threat to its defenses and its nuclear submarines.

In the end, China may not find it necessary to declare an ADIZ—or if it does, it will be largely restricted to non-disputed areas or be unenforced – – especially against war planes.  The U.S. can help ensure this does not happen in the South China Sea by cutting back or ceasing all together its ISR probes targeting China’s defenses and particularly its nuclear submarines.

A much shorter version of this piece first appeared in the National Interest. https://nationalinterest.org/blog/buzz/what-happens-if-china-declared-adiz-south-china-sea-163208