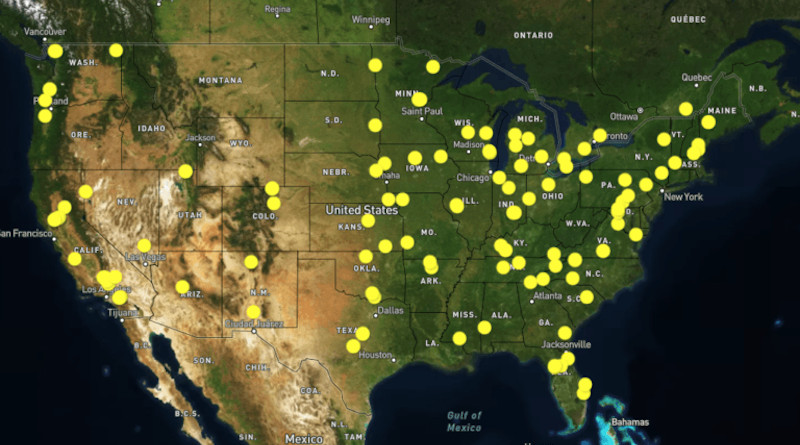 It hasn’t been a great couple of weeks for the supposed “Land of the Free” these days, though a lot of brave protesters across the country have continued to stand up to a lot of cowardly militarized police and American soldiers who have been using weaponized military helicopters, M-16 automatic assault rifles and other military gear to threaten and intimidate them, as well as grotesque crowd-control weapons from flash-bang grenades and rubber bullets to gear gas, pepper bombs and spray, tear gas and truncheons and clubs to violate First Amendment protections from speech to assembly and the right to seek redress of grievances.

And that’s not all. Trump’s and Attorney General Bill Barr’s FBI has been reportedly accompanying local cops on visits to the homes of protest movement activists trying to entrap them for “lying to an FBI agent” (a crime in the US even if you aren’t advised of your right to an attorney) or simply to intimidate them.

The above map of the US, produced by researchers at Amnesty International, is worth a visit. It will take you to pictures and video of police assaults in 125 cities in 40 states across the US that occurred in the period from May 25 through June 6. If it doesn’t get you riled up about what is happening to this country, nothing will.

Next time you hear someone saying, as Trump does regularly, that the Second Amendment is under threat, just reply that the First Amendment is in much greater danger.

As Brian Giffey, research director for the North American region for Amnesty International aptly puts it, “The police are attacking protesters against police brutality and racism to keep them from occupying city parks and streets, but the police are occupying the whole country!”