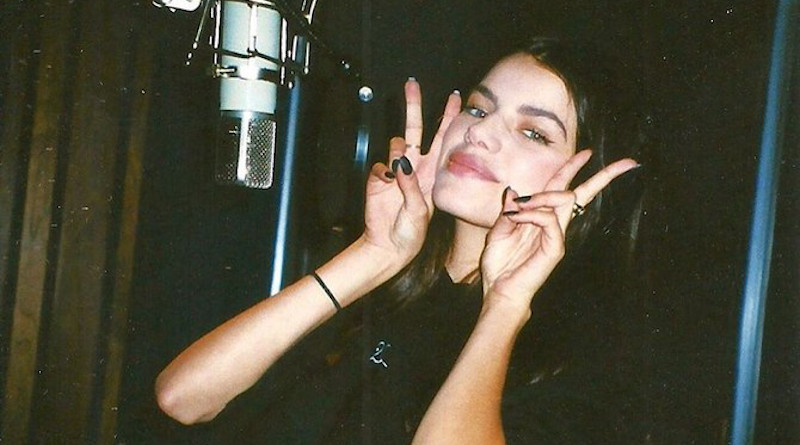 It appears that Tunisian-French singer and model Sonia Ben Ammar is working on a new musical project.

The 21-year-old shared with her 734,000 Instagram followers this weekend that she is back in the studio and working on something for her fans after months of self-isolation.

“Documentation of the (very) rare times I didn’t show up to the studio in my pajamas. I know these are old but I’m working on a new project for ya (sic),” Ben Ammar wrote alongside a series of images of herself at the studio, including one where she is seen wearing white thigh-high cowboy boots and a leather blazer dress.

“To be honest I find it challenging to stay inspired and write songs when it feels like the word is crumbling apart but art keeps us sane and brings us closer together so I like to remind myself that,” she added.

The singer, who splits her time between France and California, launched her first EP, a four-track project  entitled “EP 1” in Nov 2019 with her debut single “Joyride.”

For her debut EP, Ben Ammar teamed up with Jason Quennville, better known as “DaHeala,” the producer behind The Weeknd’s hit, “Starboy” and “Beauty Behind the Madness.” However, it is uncertain whether he is involved with the model-slash-singer’s forthcoming project.

Memorably, she performed live at Coachella back in 2018, joining French DJ Petit Biscuit for a surprise set, in which she sang their hit “Creation Comes Alive” to a packed crowd.

Born in Paris, the multi-hyphenate – who moved to Los Angeles for college (she studied music business) and to pursue her singing career – is also a rising star in the fashion industry.

She made her runway debut in 2017 for Miu Miu and quickly found herself in demand from some of the most renowned labels, including Chanel, Dolce & Gabbana and Carolina Hererra.

In addition to her modeling and singing careers, she has also appeared in a couple of French films, including the 2013 film “Jappeloup” – Her parents are Tunisian director Tarek Ben Ammar and actress Beata.