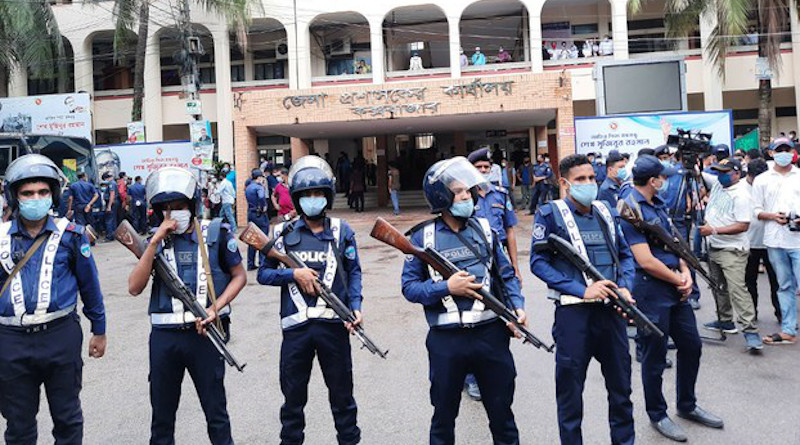 In a rare move, Bangladesh police have transferred the entire 1,400-strong force out of Cox’s Bazar to bring new personnel into the southern border district that hosts about a million Rohingya refugees, officials said Friday.

The district’s police force has been strongly criticized for shooting dead a retired army major on July 31, as well as for more than a hundred alleged extrajudicial killings of Rohingya refugees and a deteriorating law and order situation that has led to a dozen recent refugee abductions from what is a hotspot for cross-border drug smuggling. One former kidnap victim told BenarNews that his family had to sell off gold and raise money to pay a ransom of nearly U.S. $6,000.

“The police headquarters issued an order on Thursday regarding the transfer of more than one thousand constables – the transferred police constables are from eight different police stations, different check posts, the detective branch and traffic department,” Mohammad Iqbal Hossain, an additional superintendent of police in Cox’s Bazar who was also transferred, told BenarNews.

As many as 1,141 constables were transferred in a fell swoop on Friday. The remaining members of the Cox’s Bazar district police force had already been transferred in three separate phases starting Sept. 16, Hossain said, noting he couldn’t recall that there had ever been a mass transfer of this kind from a single district.

Sohel Rana, a spokesman at police headquarters in Dhaka, declined to comment on the transfers and sought more time to respond to BenarNews.

But Md. Anwar Hossain, the Deputy Inspector General for the Chittagong Range, which encompasses Cox’s Bazar, told reporters that the transfers were part of a reorganization of the force.

When Hossain was asked whether the reasons for the en masse transfer were the former major’s killing, the alleged extrajudicial killings and the alleged involvement of police in the drug trade, he denied it.

“The performance of those [transferred] personnel was satisfactory, the new set will do better,” he said.

Bangladeshi government officials have justified heavy security measures in the district that borders Myanmar, such as numerous police checkpoints, claiming they are in place to guard against potential militant attacks and to check the illegal drug trade in what is a narcotics smuggling hotspot.

It was at one such checkpoint that police on July 31 stopped former Maj. Sinha Md. Rashed Khan and then shot and killed him without asking him to identify himself, a news agency of the armed forces said in a statement Aug. 1.

“Shooting instead of arresting a person with his hands up is unlawful,” the statement said.

Police in the district have also been criticized by global human rights group Amnesty International, which claimed this month that more than 100 Rohingya refugees were victims of extrajudicial killings in Bangladesh since 2017.

The rights group said it had spoken to family members of five Rohingya refugees who were victims of “extrajudicial executions” in Cox’s Bazar.

“Every incident has a strikingly similar narrative where the victims were killed during a ‘gunfight’ with members of law enforcement agencies who claimed that they only opened fire in retaliation,” Amnesty said.

A senior government official however said that all Rohingya slain in “crossfire” incidents were drug traffickers.

“None of the Rohingya killed in the crossfire with the border guards and law enforcement agencies were the victims of extrajudicial killings. They were armed narcotics smugglers coming from the Myanmar side of the border,” Home Minister Asaduzzaman Khan Kamal told BenarNews when asked about Amnesty International’s allegations.

Meanwhile, at least two dozen Rohingya refugees have been abducted for ransom from the camps in the last month, police acknowledged, attributing the crime to Rohingya criminals, but denying that they have any connection with Arakan Rohingya Salavation Army (ARSA) rebels, like many refugees allege.

Two commanders of the Armed Police Battalion (ABPn) told BenarNews that in the last month, there had been 15 abductions for ransom from 21 refugee camps in Ukhia in Cox’s Bazar, and nine such incidents from the Teknaf camps there.

Many Rohingya refugees allege that members of ARSA are the ones taking their compatriots captive for ransom.

Md. Younus, 35, a resident of a camp in Teknaf who was abducted in August, was one of those released after his family paid a ransom.

“The members of al-Yaqin whisked me away from my house blindfolded, muzzled and with my hands tied. They took me to a nearby hill, and beat me up with iron rods and sticks,” Younus told BenarNews, referring to the short form of ARSA’s former name, Harakah al-Yaqin.

“They called my relatives from my cell phone, asking for one million taka [U.S. $11,700] as ransom and warned that I would die if they disclosed the incidents to anyone. My family members sold their gold and borrowed money and paid 500,000 taka to my captors who then released me.”

In a December 2016 report, International Crisis Group, a Brussels-based conflict prevention and resolution group, said that ARSA had recruited “several hundred young Rohingya men from Bangladesh” in October that year.

Bangladesh officially denies the presence of ARSA rebels in the refugee camps, but government and police sources in February privately acknowledged to BenarNews that they had arrested “several” of the insurgents in the previous months.

ARSA carried out attacks on police and army posts in Myanmar’s Rakhine state in August 2017.

In response to those attacks, Myanmar’s security forces launched a brutal crackdown that forced 740,000 Rohingya Muslims to flee their homes and cross into neighboring Bangladesh.

Hossain, the Cox’s Bazar additional superintendent of police, said they had arrested eight alleged abductors who are not associated with ARSA.

“ARSA has no presence in Bangladesh. Many petty criminals use the ARSA tag to create panic in the camps,” Hossain said.

“The police have always been aware of these petty criminals.”

According to a criminologist at the University of Dhaka, the district police need to take steps to ensure there are no kidnappings from the camps.

“If such incidents continue to happen, the condition of the camps would deteriorate and a dangerous criminal culture will set in,” Zia Rahman, chairman of the department of criminology at the university, told BenarNews.

“Abductions at the camps must stop.”

While the saccharine continues to ooze from the mainstream media for the incoming Biden administration, the real iron fist of what