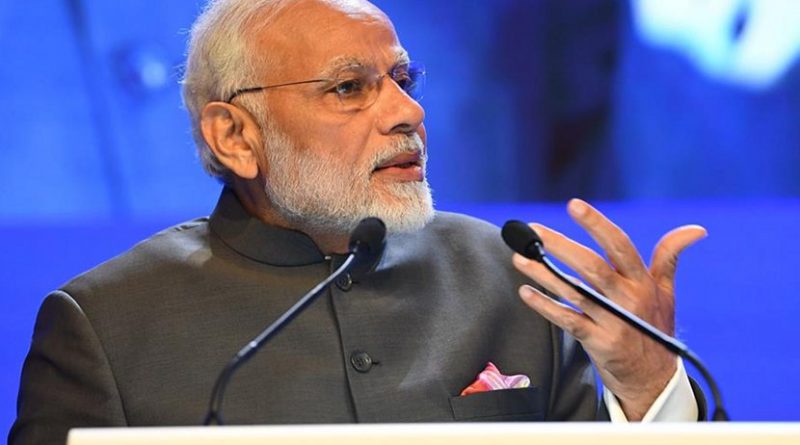 Prime Minister Narendra Modi was recently honoured with the United Nation Environment’s Champion of the Earth. This award, launched in 2005, ‘celebrates outstanding figures from the public and private sectors and from civil society whose actions have had a transformative positive impact on the environment.’ The recognition falls into the following categories – Lifetime Achievement, Policy Leadership, Action and Inspiration, Entrepreneurial Vision, Science and Innovation.

Mr. Modi received the award for his ‘leadership in the fight against plastic pollution in India, and his unwavering commitment to tackling climate change around the world….’ The award was shared with Mr. Macron who, along with Mr. Modi, has championed solar power as a renewable source of energy through the International Solar Alliance.

It is another matter that Mr.Modi’s concept of climate change may be limited and that his government, in 2017, had committed itself to doubling plastic use and then almost to a year promised to eliminate single use plastics by 2022. The issue here is of optics and marketing and not about the intent. These are almost bi-polar aspirations, swinging between extremes causing a lot of ‘head-scratching’ and puzzlement.

This recent recognition of Modi is another step in building credibility for him and his adulating masses. One must remember that after the 2002 Gujarat pogrom, which occurred under his chief ministership, he became a global pariah.

The Early days in Modi’s Tenure

One cannot ignore his campaign speeches that spoke of his manliness, the country’s loss of respect and his desire and capability to regain that respect for the country. It was almost as if he envisaged that this ‘rise of the country’ would also raise him and his stature. Even though he carried the BJP to victory, the quest for validation and respect was a necessary reboot post the Gujarat horror that transpired under his stewardship.

Thus the choreographed pilgrimage, to foreign countries as India’s 14th Prime Minister, to meet the diaspora immediately after his election. The packed auditoriums and the hosannas sung in his praise gave many in India and abroad much to think about.

Here was a ‘tainted’ leader, whose party, though having only won 31% of the vote share, was being heralded as a messiah.

Though people may consider this to be a leaf from the book of Ponzi scheme’s, one can’t deny its efficacy.

Later, the Modi-hug traveled internationally and the optics of it delivered a multi-layered message. The first implying that the PM and therefore the country are to-the-manor-born and rightfully taking a seat at the hallowed table. The second being that he was forgiving his counterpart’s country for the treatment meted out to him post the Gujarat pogrom.

The UN declaring 21st June as the International Day of Yoga was another blandishment that the Modi government gifted to the citizens of India. That Yoga was already an established Indian export people the world over had accepted as their own and that Modi was just piggy back riding on it was glossed over. Instead to many, this global recognition and acknowledgement for the land’s rich cultural history was accomplished by Modi and his team. Such recognition by world bodies raises the question of the locus-standi of at-home opposition to the Government’s Hindutva agenda. Even though his speech on this 21st of June where Modi said ‘we should not hesitate to honour our own legacy and heritage if we want the rest of the world to respect us.’ was not singing paeans to the Mughal period, it seems to be irrelevant to such world institutions. By focusing on the benigness of the Hindutva agenda peddled by the Indian government, the global community is not only giving wings to the saffron brigade and their Moriarty’s but are also putting at risk the lives of those opposed to the ongoing saffronisation.

Last year, Modi tested his global relevance with the surgical strikes. Though it did nothing for the country’s security, there was not an international peep. This silence only strengthened Modi’s stature at home. That the country is now being forced to celebrate 29th September as National Surgical Strike day only cements Modi’s credentials as a leader taking India to greater global respect.

Over the last few years Modi has moved from seeking validation, to testing the waters and finally to his global coronation. A lot has been written about the snake-oil salesman like ploys that beguile, create his aura and pave the way for him. However, one can’t diss them because it is creating a narrative that is, to say the least, unsettling.

The Champion of the Earth Award comes to Modi at a time when Indian cities dominate world air pollution lists. As per the NITI Aayog 2018 Composite Water Management Index, India ranks 120 out of 122 on the Water Quality Index. It also notes that nearly 70% of water is contaminated. However, his promise to deal with plastics and make it’s disposal a business venture is somehow seen glowingly enough to put everything else in the shade.

By honouring Modi, the award acts as a big international sign-off for his government policies be they the investment in 100 so called Waste-to-Energy plants, slashing of the environment clearance time from 600 days to just 170 without indication of any corresponding increase in manpower, or the carte blanche given to thermal power plants to pollute by the Central Pollution Control Board, the unspent or underspent monies collected for the environment and renewable energy or the high-handedness with which the Indian government handles those who oppose their environmental and social policies.

The UN may have just given Modi, his government and the Hindutva brigade a weapon to use against those opposing them. The Modi government recently charged the Congress I with getting foreign assistance to destabilise the country. How long will it be before Modi uses his foreign adulations to quell dissent at home?

Modi’s hagiography is being carefully scripted. There are many who participate willingly, others are conned or give in to participating. One would not be incorrect in assuming that Modi is being crafted into a Maryada Purush, but the question is whether it is the Ramayana version, the Atal Bihari Vajpayee version or the one that the belligerent Hindu seeks shelter in and is goaded by.

*Samir Nazareth is the author of 1400 Bananas, 76 Towns & 1 Million People. He tweets at @samirwrites

Home » There is More To This Award – OpEd