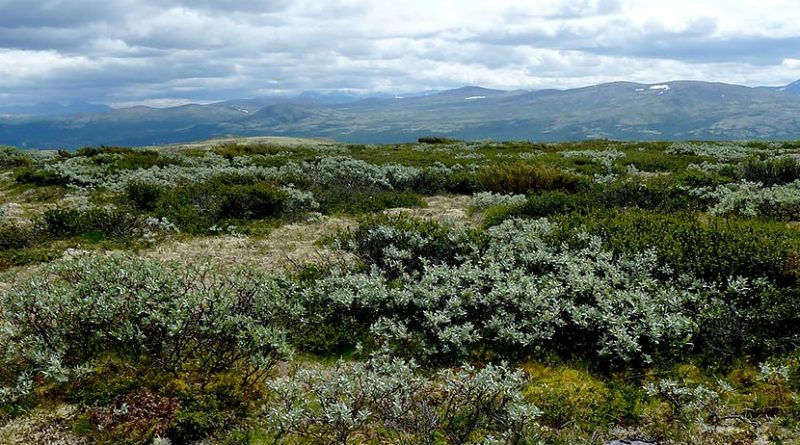 Global warming has helped create favourable conditions for shrubs to invade alpine communities. A consortium of researchers led by the Norwegian University of Science and Technology is discovering what the effects of this invasion mean for carbon cycling. Photo: Mia Vedel Sørensen, NTNU

A remote field site in the Norwegian mountains is improving our understanding of carbon cycling in high-latitude alpine areas.

Excess carbon dioxide, emitted by burning fossil fuels like coal and petroleum, is one of the most important factors in driving global warming. While the world is focused on controlling global warming by limiting these emissions, less attention has been paid to the capacity of vegetation and soils to take up and store carbon.

One of the most popular approaches to carbon storage is protecting tropical rainforests. If a rainforest is cut down, the carbon stored in the trunks and leaves will be released to the atmosphere. But plants in alpine communities in Norway also have a role to play in storing — or releasing — carbon dioxide.

“We don’t think about how much carbon is actually stored right in our own backyard,” said Mia Vedel Sørensen, a PhD candidate at the Norwegian University of Science and Technology’s (NTNU) Department of Biology who is studying carbon storage in shrub vegetation in the Dovre mountains, in mid-Norway.

Sørensen compared three types of vegetation that are typical of the Norwegian mountains:

“I wanted to figure out how much carbon these three vegetation types store and release. My hypothesis was that shrubs store more carbon than heath and meadow vegetation because shrubs have more biomass, and thus have higher rates of photosynthesis,” she said.

But it turned out to be the opposite: Shrubs, even though they are tallest, actually store the least carbon.

“It surprised me that meadows actually store a lot more carbon than shrubs. The carbon in meadows is stored mostly below the ground, next to the roots,” she said

The amount of carbon stored in heath vegetation is greater than in shrub vegetation, but less than in meadows, she said.

One unusual characteristic of heath vegetation is that it can photosynthesize during the winter, under the snow, because it is evergreen and typically grows in areas with little snow. That means sunlight is able to reach these plants during the winter.

Climate change is altering the mix of vegetation in arctic and alpine areas. That’s particularly true in Norway’s mountains, where shrub thickets are expanding in area. That’s also partly a cultural change, because changing farming practices result in fewer animals in the mountains. This allows shrubs to grow in places where animals such as sheep might have once eaten shrub seedlings, while a warmer climate means that shrubs can grow at higher elevations in the mountains.

“It is important to find out what happens to carbon capture and storage when shrubs and bushes take over areas that used to be covered by heath vegetation. How will carbon storage be affected in alpine and arctic regions when shrub communities expand at the expense of meadow and heaths?” Sørensen said.

Measured in the Dovre mountains

Sørensen and her colleagues spent two summers in the Dovre mountains, where they set up small tents over sample plots in the different vegetation types.  The small tents allowed them to measure how much CO2 was consumed and released — or what scientists call CO2 flux — by the plants in the different sample plots. The flux measurements show how much CO2 is taken up by the plants and how much is emitted from the plants and the soil.

In addition, the researchers collected vegetation samples and dug up soil samples. They measured the carbon content in the vegetation, and in the organic and mineral layers of the soil. This gave them information about how much carbon the three different types of vegetation actually store.

“There hasn’t been much research on this previously, so it is interesting to find out more about how much carbon is actually stored in the soil,” she said.

“Our hypothesis is that it is related to what is happening underground, such as how the roots grow. It may also be related to mycorrhizae, which are fungi that grow in a symbiotic association with plant roots and that can have an effect on carbon emissions. Mycorrhizae are found in both shrubs and in heaths, but not so much in meadow vegetation,” Sørensen said.

She will also look at what happens to the carbon budget when shrubs are transplanted in meadow and health vegetation, and what happens if a protective enclosure is set up around plants so that sheep and other grazing animals aren’t able to eat the vegetation, she said.

This part of her research allows Sørensen to recreate what is happening now in the Norwegian mountains, as shrubs take over other vegetation communities. She will also measure how this affect the CO2 budget accounts.

Climate change is causing shifts in vegetation types and areal extent in both arctic and alpine ecosystems. One of the biggest changes observed is that shrub communities are expanding at the expense of other vegetation types, such as heaths. The ECOSHRUB researchers are looking at what this will do to vegetation, seedlings, microclimate, albedo (the ability to reflect light) — and the carbon budget.

Home » Meadows Beat Out Shrubs When It Comes To Carbon Storage