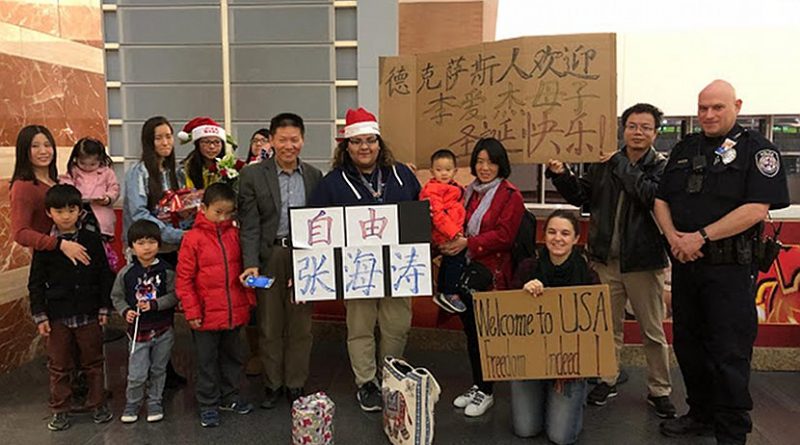 The wife of an imprisoned writer and human rights defender has escaped China and has safely landed in the United States after a rescue operation, according to ChinaAid.

Li Aijie, the wife of imprisoned netizen writer and human rights activist Zhang Haitao, successfully fled China with her son after threats against them became too great to withstand, ChinaAid said.

Li’s husband Zhang Haitao was arrested in 2014, and on January 15, 2016, he was convicted of “inciting subversion of state power” and “prying into and illegally supplying intelligence abroad” and sentenced to 19 years in prison by the Urumqi Intermediate Court. The conviction documents cited 69 China social media WeChat posts and 205 Twitter posts, including retweets of others’ tweet, as evidence of inciting subversion of state power.

Li, a stalwart advocate for her husband, not only received constant threat by various China security agents but also was beaten by her own relatives for refusing to divorce him. Government agents threatened to compromise Li’s brother’s job and interrogated her 80 year-old mother to pressure them into convincing Li to divorce Zhang, according to ChinaAid.

Because of her husband’s case and her own uncompromising advocacy effort, she has been facing enormous threat against her. She had to escape covertly, with the help of ChinaAid and other friends.

Bob Fu, president and founder of ChinaAid, said that he is grateful for the active support of the Trump administration and the U.S. officials in various departments, embassies, and consulates for their speedy assistance to Ms Li and her son, especially those in Thailand, China and Hong Kong. Former Hong Kong Democrat Party leader and legislator attorney Albert Ho was a key member of the rescue strategy as well.

Home » Wife, Son Of Jailed Dissident, Flee China To US