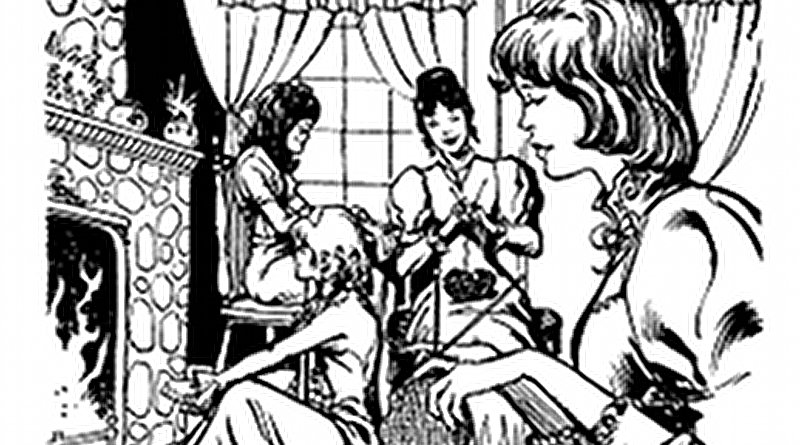 With Greta Gerwig’s new take on Luisa May Alcott’s classic 19th century novel, Little Women, in theaters, I decided to reread the book.

The novel communicates Alcott’s beliefs about proper morality and gender roles through stories of a family of four sisters, Meg, Jo, Beth, and Amy March, touting the American virtues of hard work, frugality, self-reliance, and charity.

The March family once had wealth, but they no longer do. Their father is serving in the Civil War, so they try to make do with what they have, even going without Christmas gifts.

When any of the sisters are overtaken by vanity or greed for finer things than they can afford, they learn their lessons. Love and hard work are enough to sustain a family, the story goes, and more important for one’s happiness than money.

What intrigues me is the double standard Alcott — and Americans — have for charity. Helping others is portrayed as virtuous. Receiving help, on the other hand, is not.

That poses quite a dilemma: How can any of us practice charity while others practice refusing it?

Alcott’s answer seems to be that only the “truly” destitute may accept help. In the book, the March sisters often help a family even poorer than they are. While the March sisters can stretch what they have to make due, the other family is starving.

This is more or less how means-tested government programs work today. To qualify for the Supplement Nutrition Assistance Program, better known as food stamps, in 2019, a family of four could earn no more than $33,475 — a pitiful sum — and could only have a small amount of assets in savings.

When others want to help the March sisters, Alcott does not always approve. She’s comfortable with them receiving help from a wealthy aunt, but usually not from anyone outside the family. After one of the sisters, Amy, marries well, her husband disguises his charity to his sister-in-law Jo, so she doesn’t recognize it as such.

This ties into Max Weber’s The Protestant Ethic and the Spirit of Capitalism, which describes a value system in which financial success is considered a mark of moral goodness. If one is rich, that shows they worked hard and practiced virtue. The flipside, by that logic, is the poor are lazy and morally suspect.

For the past four decades in American politics, that’s how our leaders have treated the poor, as well. We’ve altered social safety net programs like welfare to add often impossible, bureaucratically burdensome work requirements, or even drug testing. Recipients are suspected of wanting free handouts without having to work for them.

Studies of welfare recipients, like Jane Collins and Victoria Mayer’s book Both Hands Tied, shows that the working poor are anything but lazy. They are hard-working people trapped in an impossible situation. When drug tested, welfare recipients use drugs at lower rates than the general population.

Pulling yourself up by your own bootstraps is impossible, but rising out of poverty with a helping hand — or being prevented from falling into it with a safety net — isn’t. That should go for the Marches of the world as well as the “truly destitute.”

We’ve advanced beyond the 19th century gender roles portrayed in Little Women, so that women have career options beyond marriage. So let’s also get past the 19th century moralizing that ignores the structural factors that prevent class mobility for those who have done nothing wrong besides being born to poor parents.

OtherWords columnist Jill Richardson is pursuing a PhD in sociology at the University of Wisconsin-Madison. Distributed by OtherWords.org.

Home » ‘Little Women’ And The American Attitude Toward Poverty – OpEd