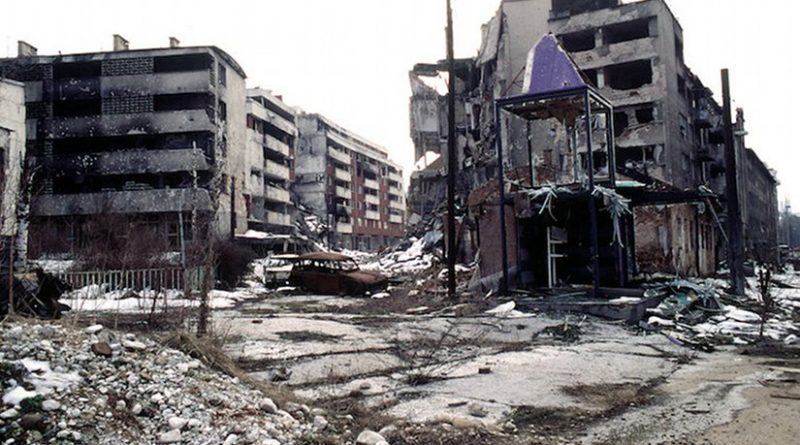 View of Grbavica, a neighbourhood of Sarajevo, approximately 4 months after the signing of the Dayton Peace Accord that officially ended the war in Bosnia. Source: Public Domain (PD-USGov-Military)

(RFE/RL) — Bosnia on February 23 formally asked the United Nations’ top court to review its 2007 ruling that cleared Serbia of charges it committed genocide during the 1990s civil war.

The move prompted an angry response from Bosnian Serbs and Serbia and a rare joint statement from the ambassadors of major powers — including Russia and the United States — urging all parties in Bosnia to pursue dialogue and avoid worsening tensions.

Many officials in Bosnia had argued against the move, saying it could spark a new political crisis in the ethnically divided country.

Bosnian Serb politicians have threatened to block the work of the federal parliament in Sarajevo over the matter, potentially halting reforms Bosnia needs to draw closer to the European Union and secure more loans from the International Monetary Fund.

“I am afraid that we have entered a really serious crisis,” said Mladen Ivanic, the Serb member of Bosnia’s tripartite Presidency. He said the request should have been made unanimously by the presidency.

Serbia’s leader had warned on February 22 that reviving the genocide case would open old wounds in the region.

“Our relations have been pushed backward 25 or 22 years,” Serbian Prime Minister Aleksandar Vucic said. “The little trust we built over the years…is now gone.”

But Bakir Izetbegovic, the Muslim member of Bosnia’s Presidency, said there was no need for all members of the presidency to unite behind the request for review, since a recommendation to make such a request before the International Court of Justice was originally made by a lawyer representing the entire presidency.

“We’ve been accused of triggering the crisis in Bosnia and the region,” Izetbegovic said. “The crisis was caused by those who committed an aggression… I think that I am on the path of truth and justice.”

In the original case launched by the Muslim-dominated government of Bosnia in 1993, Sarajevo accused Belgrade of masterminding a genocide through widespread “ethnic cleansing” during the war, which claimed more than 100,000 lives.

On February 26, 2007, The Hague court found only one act of genocide — the massacre of nearly 8,000 Muslim men and boys by Bosnian Serb forces in Srebrenica — and said there was not enough evidence to suggest that Belgrade was directly responsible.

Serb forces captured the eastern town of Srebrenica in July 1995, in the final months of the war, then summarily killed its males in Europe’s worst single atrocity since World War II.

The court did find, however, that Serbia, which gave political and military backing to Bosnian Serbs, had breached international law by failing to prevent the slaughter.

Izetbegovic said Bosnia now has “new arguments” that can be presented to the court to further the case, notably those presented during the trial of Ratko Mladic, the Bosnian Serb wartime army chief who is awaiting judgement by a UN tribunal.

Bosnia’s request for review of the UN court’s 2007 decision was prompted by the impending expiration on February 26 of a 10-year period for requesting such a review.

The ambassadors from outside powers involved in putting together Bosnia’s peace agreement met in Sarajevo on February 23 to discuss the growing tensions in the region.

In the joint statement they issued afterward, they said: “All political leaders should refrain from unilateral actions and return to the principles of compromise, dialogue, and consensus in making decisions, as well as respecting the Bosnian constitution, institutions, and the rule of law.”