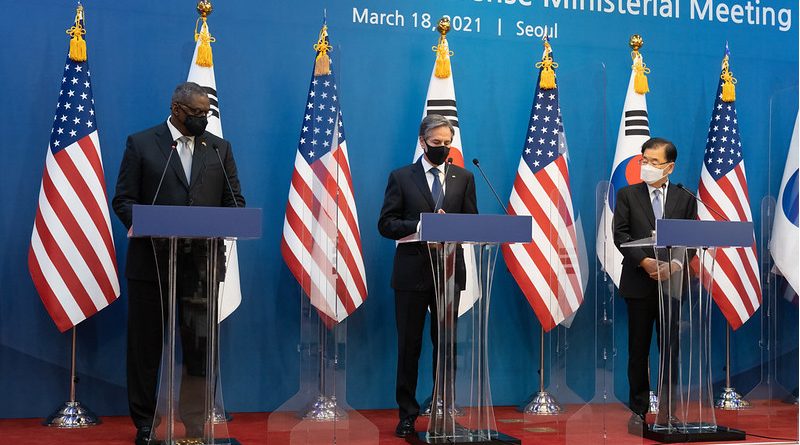 South Korea’s reluctance to explicitly embrace the US vision of a ‘free and open Indo-Pacific’ has contributed to the view that the country is a weak link in the Indo-Pacific alliance network. Seoul and Washington should work to determine how their bilateral alliance — focused on deterring North Korea — fits into the wider regional framework, which is increasingly being shaped by US–China tensions.

The lack of mutual understanding between Seoul and Washington over how the ROK–US treaty alliance fits into both countries’ views of the broader strategic environment is a serious obstacle to US efforts to balance states against China. This is particularly true given the US designation of South Korea as the linchpin of an Indo-Pacific strategy that Seoul has not officially endorsed.

By extension, South Korea’s approach to the US alliance network has also come under scrutiny. South Korean President Moon Jae-in’s emphasis during much of his term on Japanese colonial-era grievances at the expense of coordination with Tokyo in support of Washington’s Indo-Pacific strategy has come under fire. As recognition of Japan’s unique role in promoting the ‘free and open Indo-Pacific’ gains traction, the possibility that the United States may assess Japan to be a more valuable partner than South Korea has prompted fears that the strategic value currently ascribed to South Korea will be downgraded.

Experts in Beijing and Seoul agree that South Korea’s strategic importance to China has diminished, despite overtures from Chinese President Xi Jinping. Though China has an interest in fracturing South Korea–US alignment, China recognises limits to its ability to develop a more comprehensive partnership with South Korea beyond economics. The ROK–US alliance restricts defence and security cooperation between the China and South Korea, while diplomatic ties remain stunted due in part to pervasive mistrust of China within South Korea and lingering fallout from the THAAD dispute.

Yet even if South Korea is relatively secure in its alliance with the United States, the lack of mutual understanding over how their bilateral alliance fits into a wider strategic context is an issue that requires attention.

One potential explanation for the deficit of a shared strategic vision is the persistence of a rather narrow view in the United States over how the relationship promotes the South Korea’s interests. Whereas South Korea has taken steps to secure democracy and the rule of law domestically while promoting liberal values abroad, critics argue the United States is overly-focused on North Korea policy.

South Korean domestic politics also contributes to the lack of a more comprehensive strategic vision between the two countries. The left-of-centre Moon government is reluctant to overtly expand the scope of the ROK–US alliance beyond the Korean peninsula — even as Seoul’s New Southern Policy has overlaps with the US free and open Indo–Pacific vision. A preference for balance between the United States and China may persist even after Moon leaves office next year as the left has become more influential in South Korea’s current political scene in recent years.

Nothing more starkly underscores this than Seoul’s current unwillingness to join the Quadrilateral Security Dialogue (Quad).

It is possible that South Korea could accede to the Quad and still maintain decent relations with China as it is vulnerable to Chinese diplomatic and economic coercion with our without it. South Korea’s willingness to join would depend in part on member states explicitly defining Seoul’s rights and obligations in the context of the multilateral partnership.

Given that less than one-third of South Koreans currently believe that the ROK–US relationship should be focused primarily on North Korea, policymakers in Seoul may lend greater consideration to domestic demands for transforming the ROK–US alliance. This could take the form of a more comprehensive partnership, including as part of a concerted effort to maintain the liberal order in the Asia Pacific.

Washington must understand Seoul’s tenuous position vis-a-vis China, and must not take for granted South Korea’s willingness to stand by the United States on issues beyond North Korea. Seoul and Washington should thus reach a mutual understanding of their bilateral treaty alliance and how applicable it is and can be in a broader strategic sense.

Based on the Biden administration’s expressed desire for frequent bilateral consultations with South Korea, it appears that Seoul and Washington are off to a good start. Still, lingering policy differences over whether to pursue a pressure-based or conciliatory approach toward North Korea will undoubtedly shape their ability to attain a shared strategic vision in the wider Indo-Pacific region.

*About the author: Anthony V Rinna is a senior editor and specialist on Russian foreign policy in East Asia for the Sino-NK research group.