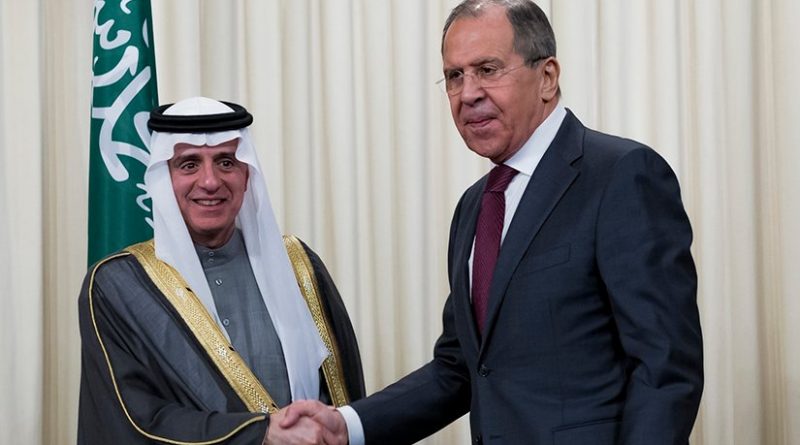 We had very useful and constructive talks with Foreign Minister of the Kingdom of Saudi Arabia Adel al-Jubeir.

We discussed our relations, primarily in light of agreements that have been reached at the top level. We have a positive view on our political dialogue, inter-parliamentary ties, cooperation in power generation and peaceful uses of nuclear energy, implementation of joint projects in agriculture and investment cooperation.

We talked at length about regional and international issues, above all considering the continued aggravation of problems in the Middle East and North Africa. We agree on the threat of international terrorism, above all the so-called Islamic State (ISIS), which directly threatens the security of regional countries, including Saudi Arabia and Russia.

We pointed out that our countries have the capability to make a positive impact on the efforts of the international community to settle regional crises, including in Syria, Yemen and several other countries.

We stand together on overcoming stagnation in Palestinian-Israeli relations by promoting a two-state solution and other principles sealed in international law, such as the Arab Peace Initiative proposed by the late King of Saudi Arabia 15 years ago.

We expressed gratitude to our Saudi friends for their attention to Russian pilgrims during the upcoming annual Hajj pilgrimage.

Overall, we are satisfied with the results of our talks, which have confirmed our mutual resolve to continue to develop Russian-Saudi relations to the benefit of our nations and in the interests of stability in the Middle East and North Africa.

Question (addressed to both ministers): Do you think the exchange of visits by Russian and Saudi officials will help you find new points of contact in your fruitful cooperation on Syria? Will King of Saudi Arabia Salman bin Abdulaziz al-Saud make a visit to Moscow soon?

Sergey Lavrov (speaking after Adel al-Jubeir): I fully agree with my Saudi friend’s opinion of the Russian-Saudi relations, which have been on the rise recently. However, we have more ambitious plans.

The Intergovernmental Commission, whose chairs met in Moscow in December 2016, has become more active. Its members have plans for a plenary meeting this autumn. These plans include discussions of practical investment projects, including in energy and agriculture. We are pondering plans for nuclear energy cooperation. A Rosatom delegation visited Riyadh this month. Twelve intergovernmental projects are being discussed; they will certainly boost our relations to a fundamentally new level.

During a recent visit to Riyadh, Federation Council Speaker Valentina Matviyenko met with His Royal Majesty King Salman bin Abdulaziz al-Saud, who reaffirmed his intention to accept the invitation he received from President of Russia Vladimir Putin to visit Russia at his convenience.

As I have said, we appreciate the Saudi authorities’ attention to Russian pilgrims. Today our partners have kindly agreed to take additional measures to make the Russian pilgrims’ stay and travel to and from the Kingdom of Saudi Arabia even more comfortable.

I would like to mention another important element of our relations: ties between our regions. Over the past few months, the heads of Tatarstan, Ingushetia and Chechnya visited Saudi Arabia, where they met with senior Saudi officials.

I fully agree with what my Saudi colleague and friend said about a settlement for Syria. Russia and Saudi Arabia wholeheartedly support the decisions taken by the International Syria Support Group (ISSG) and the UN Security Council, including Resolution 2254.

Question (addressed to both ministers): Saudi Arabia has said more than once that Syrian President Bashar al-Assad must be removed, either by political or military means. Have you smoothed over your differences on Syria regarding President al-Assad’s role in the country’s future?

Sergey Lavrov: As we have said when answering the previous question, I cannot say that there are any insurmountable differences in our views on Syria. Russia and Saudi Arabia are both members of the ISSG and its ceasefire and humanitarian task forces. These task forces meet in Geneva every week to discuss issues within their competence. Also, Russia and Saudi Arabia co-authored UN Security Council Resolution 2254, which sets out the principles for a Syrian settlement, including that the Syrian people will decide the future of Syria.

Of course, the practical implementation of this principle must be discussed and coordinated between the Syrian government and the entire range of the opposition, as per Resolution 2254.  It was with great difficulty and only with support from external players, including Russia and Saudi Arabia, that the talks have been launched. There is hard work ahead under the UN guidance. It involves the external players using their influence on the Syrian parties to urge them to act as constructively as possible to find mutually acceptable solutions in the name of their country’s future.

Foreign Minister Adel al-Jubeir has reaffirmed his country’s support for the Astana process. Our efforts in Astana have helped us reach a ceasefire agreement, and we are working now to ensure compliance with it and to create a mechanism for responding to ceasefire violations. The idea of the Astana process was a major, and possibly decisive, argument that led to the resumption of the Geneva talks. We want to develop these two processes in a coordinated manner.

Question (for both ministers): The Iranian armed forces and Hezbollah in Syria are being accused of implementing a plan to change the demographic situation in many Syrian cities. In addition to this, they are being accused of committing genocide. The possibility of withdrawing the Iranian troops and Hezbollah combat units from Syria was discussed but the situation hasn’t changed. What do you think about the role of Iran and Hezbollah in Syria? What can be done in this regard?

Sergey Lavrov (speaking after Adel Al-Jubeir): With regard to your question about “ethnic cleansing”, in fact, this process is the result of an agreement between the Syrian government and the corresponding opposition groups in a particular region. We believe it can be instrumental in reducing the death toll.

During hostilities, the opposing sides and those who want to help them often have to make decisions that are not ideal from the point of view of preserving the principles of a settlement. We are convinced that such measures are beneficial on a temporary basis to save people’s lives. The liberation of eastern Aleppo proved this. The methods used back then helped save many lives. Unfortunately, we don’t see any attempts to learn through this experience when it comes to Mosul, Iraq, now.

As for the presence of Iran and Hezbollah in Syria, as you may well be aware, we do not consider Hezbollah a terrorist organisation. We operate on the premise that both were invited to Syria by a legitimate government. Of course, we are aware of Saudi Arabia’s position. Clearly, we are not on the same page in that regard, to put it mildly. Nonetheless, we share the view that all without exception Syrian sides and all without exception external actors who have any influence on these sides should be involved in the process if we want to resolve this crisis. Of course, terrorist organisations recognised as such by the UN Security Council, such as ISIS and Jabhat al-Nusra, must be excluded from the process. Just like Russia and Saudi Arabia, Iran is a member of the ISSG and has declared its commitment to UN Security Council Resolution 2254. Being part of the Astana process, Iran, along with Turkey and Russia, is one of the three guarantors of the ceasefire regime, which is critical at this stage. In this sense, this is a common position of both Russia and Saudi Arabia.