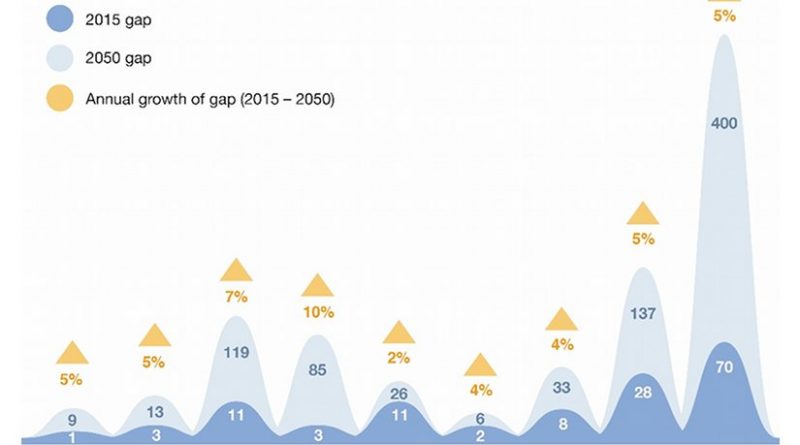 The world's six largest pension systems will have a joint shortfall of $224 trillion by 2050. Credit: World Economic Forum

The world’s six largest pension systems will have a joint shortfall of $224 trillion by 2050, imperiling the incomes of future generations and setting the industrialized world up for the biggest pension crisis in history.

To alleviate the looming crisis, governments must address the gaps in access to the pensions system and ageing populations as they are the key sources of the widening pension gap. These are the main findings of the new World Economic Forum report, We’ll Live to 100 – How Can We Afford It?, released Friday, which provides country-specific insights into the challenges being faced at a global level and potential solutions.

“The anticipated increase in longevity and resulting ageing populations is the financial equivalent of climate change,” said Michael Drexler, Head of Financial and Infrastructure Systems at the World Economic Forum. “We must address it now or accept that its adverse consequences will haunt future generations, putting an impossible strain on our children and grandchildren.”

The report is the latest study to calculate the impact of ageing populations on the pension gap in the world’s largest pension markets, which include the United States, United Kingdom, Japan, Netherlands, Canada and Australia.

The gap in those markets is the largest in the US, where a current shortfall of $28 trillion is projected to rise to $137 trillion in 2050. The average gap in the six markets combined is calculated to reach $300,000 per person. The total gap for all 8 markets in the study (which further includes China and India, which have the world’s largest populations) will reach a total of $400 trillion by 2050.

For low-income earners the 70% target will not be sufficient and could result in poverty unless savings are increased. The funding gap will continue to grow at a rate higher than the expected economic growth rate, often 4%-5% a year, driven in part by ageing population effects: a growing retiree population who are expected to live longer in retirement.

“The retirement savings challenge is at crisis point and the time to act is now,” said Jacques Goulet, President, Health & Wealth at Mercer, the lead collaborator for this initiative. “There is no one ‘silver bullet’ solution to solve the retirement gap. Individuals need to increase their personal savings and financial literacy, while the private sector and governments should provide programmes to support them.”

The report suggests five high priority actions that governments and policy-makers should take to adapt pension systems to address the challenges:

The report emphasizes that governments and policy-makers have a central role to play in reforming pension systems to ensure we can adapt to societies where living to 100 is commonplace.

“Because retirement outcomes unfold slowly over decades, emerging problems are very hard to see and are virtually unchangeable once they occur,” said Robert Prince, Co-Chief Investment Officer, Bridgewater Associates and part of the World Economic Forum’s Retirement Investment Systems Reform Project Steering Committee. “Good outcomes require effective approaches and good decisions applied consistently over decades. Ineffective actions taken over decades will put a weight on society and economies that will be virtually impossible to lift once it occurs. Given ageing populations and increasing lifespans, effective reforms are required now.”