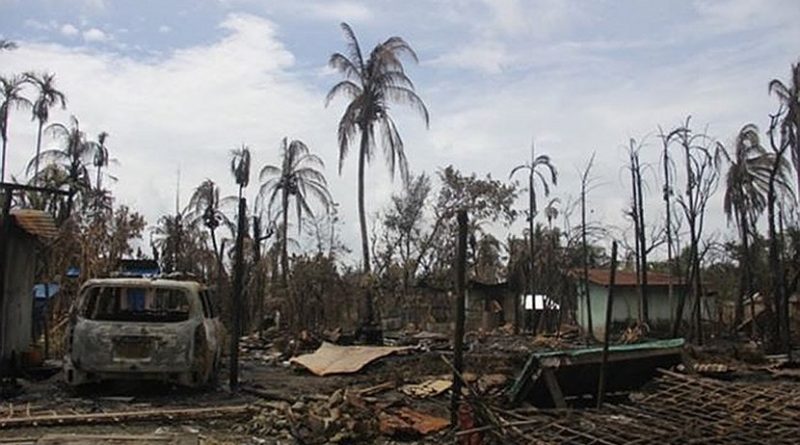 A burnt down house in a Rohingya village in northern Rakhine State. File photo by Moe Zaw (VOA), Wikipedia Commons.

Brutal treatment of Muslim Rohingya minority in Myanmar is creating severe rifts with the country’s newly won friends in Washington and London. China, for geopolitical reasons, quickly stepped in to support the Myanmar government’s position while India worries about the spread of Islamic militancy. Bangladesh as the reluctant host of hundreds of thousands of Rohingyas also worries about internal security.

A series of coordinated attacks by an obscure insurgent group on more than 20 police stations in Myanmar’s western Rakhine State on August 25 resulted in a massive backlash from the Myanmar military as an estimated 420,000 Rohingyas cross the border into Bangladesh. The obscure group Arakan Rohingya Salvation Army, or ARSA, also managed to rattle Myanmar’s delicate foreign relations just as the country was emerging from decades of isolation. Because of reports of carnage and widespread human-rights abuses, Great Britain suspended a fledgling training program for army officers from Myanmar, aimed at “engaging” the military.

A US plan to restart its International Military Education and Training program for Myanmar officers, suspended after the country’s military crushed a pro-democracy uprising in 1988 may now be halted by the Congress. The reputation of Myanmar’s pro-democracy icon and, until recent events a darling of the West, Aung San Suu Kyi, is in tatters for her failure to condemn the army’s so-called “clearing operations” in Rakhine State. Some commentators even suggest that she should be held responsible for what the UN has termed ethnic cleansing and stripped of her 1992 Nobel Peace Prize.

Such criticism from the West must be music to the ears of Chinese security planners, who are rattled by Myanmar’s recent drift from a close relationship with China toward improved ties with the West. Following the massacre of pro-democracy demonstrators in 1988, the United States, the European Union and even Japan imposed sanctions on Myanmar. China then stepped in with trade agreements, bilateral aid and military sales. Such heavy dependence on China prompted Myanmar’s change in course from heavy-handed military rule to the introduction of a more pluralistic political system.

Elections were held in 2010, paving the way for a quasi-civilian government, and relations with the West were normalized. Then US Secretary of State Hillary Clinton visited Myanmar in 2011, followed by former President Barack Obama in November 2012. China, to its dismay, was no longer Myanmar’s closest ally, and Myanmar is of utmost strategic importance to China, providing access to the Indian Ocean. Oil and gas pipelines, from the Bay of Bengal through Myanmar to Yunnan province, shorten supply routes from the Middle East, allowing China to avoid the potentially vulnerable chokepoint of the Strait of Malacca.

Predictably, The Global Times, an official Chinese newspaper, was quick to exploit the West’s reproachful attitude towards Myanmar and Suu Kyi, on September 18 noting that “despite being heavily criticized by the Western media over the Rohingya issue, Myanmar State Counselor and former Nobel laureate Aung San Suu Kyi has gained popularity with Chinese netizens, who praised her defiance against ‘outside pressure while safe-guarding the people’s interest.’” The paper, quoting Chinese social media posts, went on to say that Suu Kyi, who “had long been seen as a proxy of the West…has won cheers…from Chinese online communities who are routinely indignant over Western pressure on developing countries over issues concerning national security.”

Despite Western criticism, Suu Kyi has no power over the army which, according to the country’s military-drafted 2008 constitution, stipulates that it takes orders only from its commander-in-chief. Criticized for not opposing the army’s abysmal behavior in Rakhine State, she broke that silence in a September 19 televised speech, which her Western critics dismissed as too bland. Her next appearance came four days later when she gave an exclusive interview to Chinese media in the capital of Naypyitaw. China’s official news agency Xinhua quoted her as saying she “appreciated China’s recognition that the problems facing Myanmar are extremely complex and cannot be solved overnight.” When asked about China’s ambitious Belt and Road development initiative, she stressed that “it has great potential to create better economic and social environment for all the countries and regions concerned.”

India, another friend in need, was also not slow to use the crisis to improve relations with Myanmar. Prime Minister Narendra Modi, during a highly publicized visit to Myanmar in early September, expressed concern over “extremist violence” in Rakhine State. Suu Kyi thanked India for its stand on terror threats confronting Myanmar, adding that “both countries should cooperate to tackle terrorism.” India and Myanmar also signed several agreements on maritime security cooperation and sharing shipping information — which could be seen as an attempt by India to keep an eye on what its regional rival China is up to in the Indian Ocean.

Thailand also refrained from criticizing Myanmar, pledging to work with the Association of Southeast Asian Nations, Asean, to promote peace and provide humanitarian assistance to the conflict’s victims.

Bangladesh, closest to the conflict zone, was less restrained. Four days after the August 25 attacks, the secular Awami League government in Dhaka proposed joint military operations with Myanmar against ARSA and declared that refugees would be turned back. The Awami League perceives the political organizations among the Rohingyas as a security risk because of their leaders’ longstanding relationship with the fundamentalist Bangladesh Jamaat-e-Islami, BJI, strong in the Chittagong area adjacent to Rakhine and an ally of main opposition party, the Bangladesh Nationalist Party.

Bangladesh reversed that policy after a trickle of refugees became a flood and the country’s security forces could not possibly stop the tens of thousands of people streaming across the border on a daily basis. Massive demonstrations in support of the Rohingyas were held in several cities in Bangladesh. On September 12, the country’s Prime Minister Sheikh Hasina Wajed visited a camp along the border and said that Bangladesh would offer temporary shelter and aid, but that Myanmar should soon “take their nationals back.”

Bangladesh will hold elections no later than January 28, 2019. A return to power of BNP, which formed coalition governments with BJI from 1991 to 1996 and from 2001 to 2006, could allow for a more Rohingya-friendly policy, including turning a blind eye to the establishment of sanctuaries for the militants in the border areas. That was the case in the early 1990s, when the resistance was dominated by the Rohingya Solidarity Organization and maintained a huge camp near the town of Ukhia in southeastern Bangladesh. Following a 2013 court order, BJI is barred from participating in the next election because its party constitution is at variance with electoral law.

But if the Awami League fails to win the next election, BJI and likeminded radical groups could still wield considerable influence over the new government.

The region will not be the same after the August 25 attacks. ARSA may be a ragtag band of a few hundred poorly armed fighters. But, in a single stroke, they have brought a profound impact on the region’s geopolitical balance, perhaps a goal in launching those August attacks. The West is losing ground, with the refugees and Bangladesh as victims, while China and India scramble to take advantage of the crisis to advance their respective security and business interests.  Unless the West’s rightful condemnation is accompanied by a nuanced practical approach to the Rohingya issue, terrorism may have found a new frontier in Asia while reinforcing Beijing’s position in the region.

*Bertil Lintner is a former correspondent with the Far Eastern Economic Review and author of several books on Burma/Myanmar, including Burma in Revolt: Opium and Insurgency Since 1948 (published in 1994, 1999 and 2003), Land of Jade: A Journey from India through Northern Burma to China, and The Kachin: Lords of Burma’s Northern Frontier. He is currently a writer with Asia Pacific Media Services.