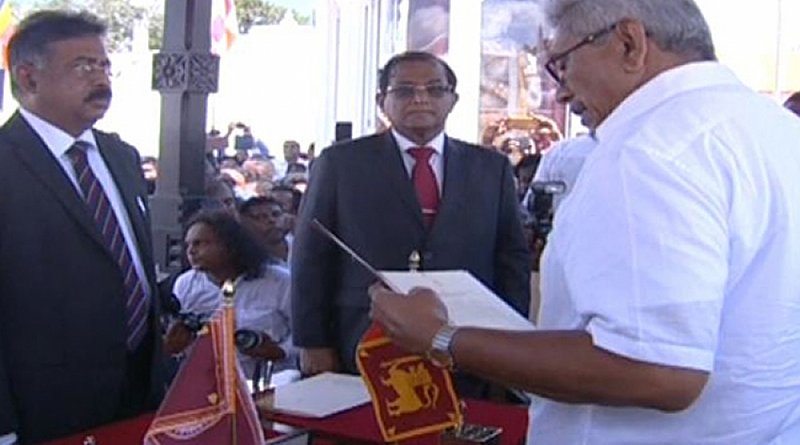 Sri Lanka has just elected Gotabaya Rajapaksa as its 7th executive president. Soon after his election, he appointed his elder brother and former President Mahinda Rajapaksa as the caretaker prime minister. This has brought the Rajapaksa family back to the helm of Sri Lankan politics and has consolidated their hold on power. It is expected that President Gotabaya will use the 19th amendment of the Constitution to dissolve the Parliament and hold elections before the end of its term. According to the 19th amendment, the President can dissolve the Parliament six months before the end of its term, which means that it can be dissolved any time after March 2020.

The main issues on which Gotabaya focused his campaign were national security, corruption and the deteriorating economic situation. The Easter Sunday attacks showed up glaring security lapses and the lack of coordination within the government. Gotabaya projected himself as the sole leader who can protect the nation from security threats. The role he played as Defence Secretary in finally defeating the LTTE helped his campaign. The Central Bank bond scandal exposed former President Maithripala Sirisena and previous Premier Ranil Wickremesinghe’s seriousness in fulfilling their promise of good governance. The crumbling economy and long-neglected drought problem also benefited Gotabaya’s campaign as he was seen as a strong and decisive leader who can steer the country out of these problems.

The economy will be a major agenda for the new government. The state of the economy in the island state has gone from bad to worse and none of the economic indicators performed well in the last four years. The GDP growth rate has fallen from 5% (2015) to 3.2% (2018). The value of the Sri Lankan rupee to the US dollar has been in free fall and has depreciated from 135 to 162 during this period. The state of all sectors is in dire condition. The worst hit is the service sector, which contributes more than 50% to Sri Lanka’s GDP. The service sector, which grew at 5.9% in 2015, is now growing at 4.7%. The sagging economy led people of the lower and middle classes to vote in large numbers for Rajapaksa.

There is hope for the Sri Lankan economy to get back on track soon. Although, during these three years, the performance was not good on several economic indicators, Foreign Direct Investment (FDI) inflow has doubled. The net FDI inflow, which was US$ 679 million in 2015, surged to 1.6 billion in 2018. The main reason for this is the great game which is being played between the two leading Asian powers in Sri Lanka. China is now the leading FDI investor in China and has invested US$ 628 million, compared with India, which invested US$ 174 million in 2017. India and China have been investing heavily to increase their influence for a variety of reasons. Both countries understand the importance of the Indian Ocean Region (IOR), which plays a key role in their economy, trade and security framework. Sri Lanka is at the centre of the IOR and the country which will have greater stakes and leverage over this island nation will have an edge in the Indian ocean.

The Rajapaksas, during their previous tenure, were closer to China and, during his tenure, Mahinda Rajapaksa tilted more towards China. Chinese projects and investments surged during his reign. The Chinese gave huge sums as loans at a high-interest rate to Sri Lanka which resulted in Colombo falling into a debt trap. The debt rose so high that Colombo had to give away Hambantota port on a 99-year lease to Beijing. This time, it is expected that the new President, Gotabaya Rajapaksa, will act more smartly than his brother did while dealing with Chinese investments.

The Rajapaksas now want to balance both the Asian superpowers and this can be seen in the decision taken by President Rajapaksa to choose India as the destination for his first foreign visit. He understands the importance of India because, at present, it is Sri Lanka’s largest trading partner after the USA. India accounts for 25.5 % of Sri Lanka’s total trade compared to China, which accounts for 20.5%. Importantly, the trade deficit which Sri Lanka shares with China is way more than the trade deficit it has with India. Sri Lankan goods and services have a bigger market in India compared to China and it needs that market to boost its economy.

*About the author: The writer is with the Vivekananda International Foundation

By Tiffany Muller* Ten years ago, in January 2010, the Supreme Court released its disastrous Citizens United decision. The court, either through remarkable