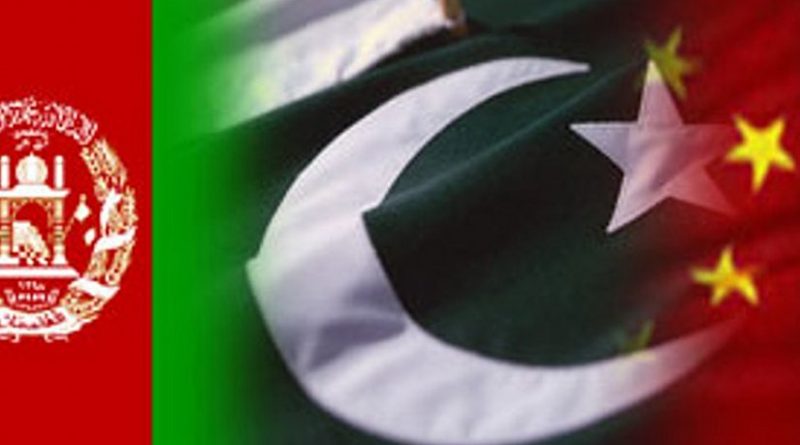 Flags of Afghanistan, Pakistan and China.

The tripartite mechanism in Beijing this year has encouraged Afghan government to talk to Taliban. The Chinese Foreign Minister Wang Yi said that China supports “an Afghan-led and Afghan-owned peace and reconciliation process.”

The Chinese Foreign Minister further stress on different areas of the cooperation, connectivity and prosperity of the both Afghanistan and Pakistan during the conference.

In addition, Afghanistan foreign Minister Salahuddin Rabbani showed willingness to improve the security of the region with the help of China and Pakistan. As he said that terror, threat remains around the region and his country is ready to cooperate with regional countries especially China and Pakistan. The Pakistani foreign minister Khawaja Asif, further appreciated the tripartite mechanism for a stabilized bilateral relations between Afghanistan-China-Pakistan. He expressed that his country shared a long border with Afghanistan and have a same culture.

engagement with Taliban is crucial at this moment both for Afghanistan and China however, Pakistan being accused of supporting terrorism in Afghanistan have realized that regional connectivity plays more significant role in bringing prosperity to Pakistan rather backing terrorist groups in Afghanistan. The spillover impact of terrorism had much higher consequences for Afghanistan and Pakistan. Providing logistics support to terror groups is low-priced than comparing a Counter-terrorism strategy which is costly, Afghanistan and Pakistan paid a heavy price for counter-terrorism strategies. Now it is a time for both the countries to demonstrate a strong commitment to the prosperity of the whole of the region with the assistance of China.

The push for One Belt One Road project was announced by Xi in his visit to Kazakhstan and Indonesia in 2013. The plan of (OBOR) then fervor Chinese businessmen and Chinese policy makers inside CPC. Even though, due to a lack of harmony in the region and a new (US National Security Strategy Policy) in South and Central Asia has made China more inclined to her neighbors. However, in the new National security policy the US has accused China including Russia of being a big challenge to the American power, influence and interest attempting to deteriorate American security and prosperity around the world. China’s fast growing fame indeed undermines the US power throughout the world; China has been actively engaged in different parts of the globe and more specifically with its neighbor countries. The Chinese peaceful rise and non-interference theory appears to be successful and most favorable to the regional countries.

Initial and lower-level discussion about negotiations has failed so far because both the Taliban and the Afghan government each of the sides view one another with suspicion and doubt. There is tendency in the US and in Western countries that the Taliban want an outright victory. They do not want to share power with others. They wish to institutionalize a central authority similar to the one when they were last in power, at the same time they want to have a radical Islamist rule over Afghanistan without rights for women and minorities and they want to export Islamism to the region.

Relatively, the Taliban has failed during their regime to provide adequate facilities to their people. On the other hand, China is completely and strictly against the rule of Taliban in Afghanistan as the Taliban could have an impact on the Xinjinag province of China and rise to extremism and terrorism in that particular province. The Taliban could export terrorism into the Central Asian republics and that situation will be alarming to Russia as there are rumors of the Daesh Presence in Afghanistan. TTP has pledged allegiance to ISIS, their members are active in Afghanistan in the province of Kunar, Nangarhar, and they converted themselves to Daesh. China stands tall against terrorism, extremism and separatism.

Pakistan should refrain from supporting terrorism activities in Afghanistan, it has not benefited Pakistan in the past and it will not benefit her in the future as majority of the Afghans blame Pakistan for being a strong supporter of the Taliban movement. It’s also necessary for China to put more pressure on Pakistan to give up the policy of terrorism, extremism in the region. China is much close ally of Pakistan therefore; it’s the responsibility of China to pressurized Pakistan in order to give a success to its one belt one Road project.

Beijing economic prosperity in the region requires a full-fledged security assistance to its neighbor which Beijing has already helped and equipped Pakistan military, similarly China need to support Afghan army forces so that a terrorist threat cannot be emerged on Chinese investment in the whole region, the success of this policy will be in Beijing’s interest, however Chinese relations with Pakistan is sensitive, because Pakistan support extremism and terrorism, backing terrorist group by Pakistani establishment is in sort of strategic assets for them. Pakistan have always seen terrorist groups in their backyard to unleash them on their neighbor, this development is posing a serious threat to China’s economic prosperity, China should compel Pakistan of not supporting insurgency in the region as the game of tit for tat will continue from other countries.