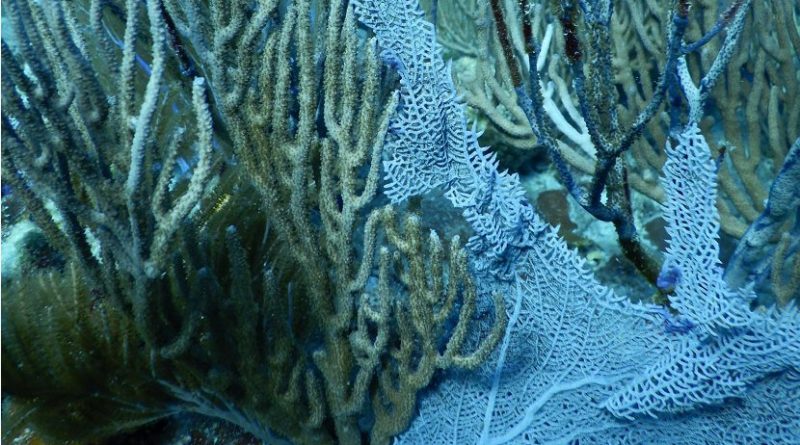 Damaged gorgonian corals on a reef off the coast of St. John, US Virgin Islands. The living tissue on many of the branches have been chipped or torn off, leaving only the dark non-living core of the branch. Credit: Howard Lasker

When hurricanes Maria and Irma tore through the Caribbean, they not only wreaked havoc on land, but also devastated ocean ecosystems.

Coral reefs off St. John, part of the U.S. Virgin Islands, suffered severe injury during the storms, say scientists from the University at Buffalo and California State University, Northridge who traveled there in late November to assess the damage — the first step in understanding the reefs’ recovery.

Some coral colonies lost branches. Others were cloaked in harmful algal growth. Many — weakened by the hurricanes — were left with ghostly, feather-like strands of bacteria hanging off open wounds where bits of coral had been scraped off.

Researchers also observed sites where whole coral colonies, akin to individual trees in a forest, had been swept away by the fury of the storms.

“Hurricanes generate huge waves. The effect is like sandblasting — the waves carry sand and debris, such as bits of broken coral, onto the reefs, striking them over and over again,” said Howard Lasker, PhD, professor of geology in the UB College of Arts and Sciences.

“In shallow waters, what we found certainly lived up to our expectations — holy, moly this was bad news,” said Edmunds, who has spent 31 years studying St. John’s reef. “But when we went deeper, it became more nuanced. It was still beautiful. There were corals, sea fans and some fish swimming around. Then you would look more closely, and you would see tumbled corals and missing corals in spots where you had seen corals just three months before. There were changes, but there certainly was a tremendous amount still there. I think it’s very encouraging.”

Coral reefs act as habitats for fish and other wildlife, providing food for communities worldwide and generating tourism dollars for seaside economies.

The recent hurricanes presented a rare opportunity for Lasker and Edmunds to study how corals recover from disasters — an important line of research in a warming world where rising ocean temperatures are stressing reefs.

“It’s an interesting natural experiment,” Lasker said. “You could not, in good conscience, conduct such an experiment on your own as a scientist, and it is sad to see these beautiful places in the ocean damaged so severely. But we can learn from this — it gives us the chance to better understand the process of recovery.”

Corals, often thought of as plant-like, are actually tiny marine animals. They build colonies that rise from the ocean floor to form the colorful, whimsical structures that people know as reefs. As time goes on, Lasker and Edmunds will study how quickly coral recruits repopulate damaged sites, and whether injured colonies bounce back or die.

Lasker and Edmunds have been researching St. John’s reefs for years. Their team has been documenting which coral species live there, and examining photographs dating back to 1987 to determine how the reefs’ composition has changed.

The focus is on understanding the balance between hard, stony corals, which form the backbone of ocean reefs, and softer, more flexible gorgonian corals — tree-like species that form an underwater forest of sorts, providing habitat for small fish and other aquatic life.

The hurricanes add an unexpected variable to this work.

During the recent research trip, the team assessed damage at sites off of St. John’s southern coast, in an area that is part of the Virgin Islands National Park. In the coming months and years, the scientists will revisit many of these spots to see how coral communities are — or aren’t — recovering.

Edmunds says what remains of the St. John’s reef is still quite beautiful, populated with an abundance of coral with the ability to reproduce, if given time. Despite these encouraging signs, however, he notes that today’s reefs are much more vulnerable than in past decades, given climate change and other stressors.

“Hurricanes have always occurred,” Lasker said. “They can cause extensive damage, but then the populations start to recover. It’s analogous to forest fires: After a number of years, the forest starts returning. There’s a period of disturbance, and then the system recovers.”

But scientists still have a lot of questions about this rebound.

For example, few investigators have looked in detail at the plight of soft corals — Lasker’s area of expertise. There are clues that these species may fare better than their stony counterparts after a disaster, but more research needs to be done to understand how storms, warming waters and ocean acidification can alter the composition of reefs and whether these changes are permanent or short-lived, Lasker said.

“These are magnificent ecosystems,” he said, “and we really know very little about how they change and recover after disasters.”