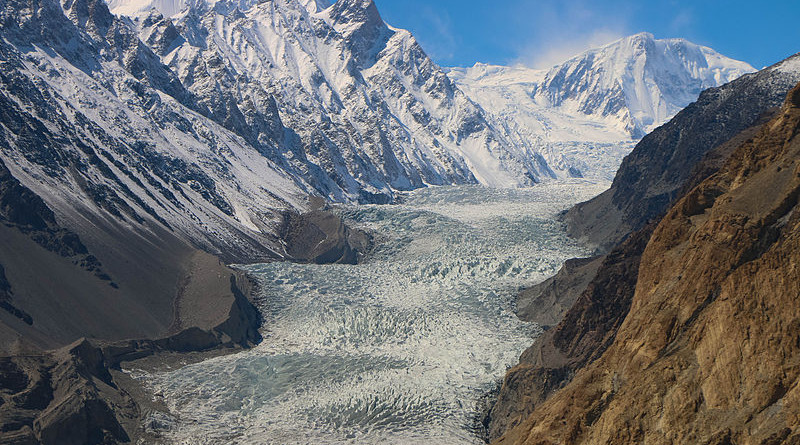 Glaciers have been shaping our world for millions of years, but because of climate change glaciers are disappearing, altering not only our landscapes but changing our oceans, weather, and life on earth. The glaciers have been melting since the last ice age, but during the past few years these are retreating at a much higher rate because the earth’s average temperature has been increasing dramatically for more than a century and the temperature is expected to rise around 1.4 to 5.8 °C  by the end of this century, which would again accelerate the melting of glaciers, such continuation of the melting of glaciers during the coming years will lead to formation of glacial lakes, avalanches and water shortage thus affecting millions of people around the globe.

Gilgit-Baltistan is amidst the world’s greatest mountain ranges: the Himalayas, the Karakorum, and the Hindu Kush holding more than 7000 glaciers. The rugged, lofty and snow-capped mountains and glaciers have added to the beauty of Gilgit-Baltistan, but the melting of these glaciers have wreaked havoc in this region. According to the study, with an estimate of 7250 number of glaciers no country on the earth, outside the Polar Regions, has the greatest number of glaciers than Pakistan. The scientists have predicted that a third of the world’s glaciers will be disappearing by the end of this century that would be having several consequences to Pakistan, especially to the people living in the northern areas of the country are dependent on these glaciers.

The earth is getting warmer because of the burning of fossil fuels, which increase the number of greenhouse gases, the climate change drivers, causing global warming. These greenhouse gases form the cover and trap the heat inside it which results in a rise of earth’s temperature. This Soaring of earth’s temperature has resulted in a glacier retreat. This melting of glaciers would then bring several catastrophes: floods, droughts, hurricanes, avalanches, and glacial lakes.

Glaciers require specific climatic conditions such as high snowfall in winter and cool temperature in summer to make sure that the snow accumulated in winter season wouldn’t be lost in summer, but due to the increase in temperature in the North has caused various glaciers to melt, said by Muhammad Saleem, spokesperson for climate change ministry and environmental educationist. He explained that Pakistan’s weather scientists have shown evidence that glaciers in the Karakorum Range are melting at a much higher rate of 0.5 % annually. He urged that the rising temperatures in snow-covered areas in Gilgit-Baltistan and Chitral district are causing mountain streams and rivers to swell alarmingly in summer months and burst their banks. Temperature in the northern areas of Pakistan did not use to go above 28 Celsius in the months of summer, but from a past couple of years it has risen to many degrees which have resulted into glaciers retreat, for instance, Passu glacier near Gojal valley, Gilgit-Baltistan has retreated by 25m during the last one year.

The Glaciers in Gilgit-Baltistan are one of the tourist attraction sites; furthermore, they are frozen reservoirs that supply water to hundreds and millions of people and many of the rivers crossing through Pakistan are fed by these glaciers, but their melting have created havoc in this region, and the people are living in a perpetual fear of glacial lake outburst floods (GLOFs), avalanches, river flows, and land sliding.

The Glaciers have been the source of freshwater for the inhabitants of Gilgit-Baltistan for hundreds and thousands of years; they solely depend on this water to meet their water requirement, but these glaciers are melting at a higher rate and according to a research more than 3000 glaciers have formed unstable lakes, most of them are at a risk of bursting, which can cause avalanches and floods. This glacier retreat alters water availability thus making it unavailable for agriculture, industrial and domestic use.

The Ultar Glacier had watered the fields and grazing lands in Harchi valley, but it has been melted because of global warming and has formed small lakes that could burst at any moment. In summer 2019, much of the fields in Harchi valley were washed away by the glacial floods. Similarly the Hinarche Glacier in Bagrot, Gilgit-Baltistan has been scrammed and it has been retreated by almost 900m from 1906 to 2014. Likewise, Passu Glacier is also shrinking thus threatening the people’s lives.

The melting of glaciers also carriers an imminent threat of forming glacial lakes. These lakes formed because of the extreme melting of glaciers. Fast melting of these glaciers can cause these lakes to overflow and break their barriers, thus flooding the areas and perishing many people along its way (GLOFs). For instance, Shimshal valley Glacial Lake has a history of surging and bursting and has caused great damage to the people in this region.

Moreover, melting of glaciers would increase the flow of water level in rivers and will eventually be causing large scale damage to fields, businesses, and transportation and will also submerge small valleys and cause widespread erosion which would be disastrous, as it will leave no land for irrigation thus making it difficult for crops to grow.

The melting of glaciers has also contributed to some landslides in the region of Gilgit-Baltistan which have caused many casualties in the region and have jammed people’s lives completely, hence increasing their suffering, as in 2012, a massive avalanche hit the Pakistani base at Gyari sector and killed 148 soldiers and civilians. Land sliding is also an aftermath of the melting of glaciers and it has proved to be disastrous. This liquefying of ice because of climate change has resulted into number of glacial lakes which then overflow and cause landslides in the region.

Attabad Lake is the prominent example that was formed because of a massive landslide at Atta Abad village, Hunza. This land sliding had perished many people and blocked the flow of the Hunza River for many months, displaced many people from the region and flooded many areas like Gulmit, while completely submerging Shiskat valley. Approximately, 242 houses, 135 shops, four hotels, two schools, two small factories, and several hundreds of acres of agricultural land had been flooded.

The glaciologists have predicted that many of the world’s glaciers will be disappearing by the end of this century. This would mean disastrous consequences for the entire globe especially for Pakistan because the people from the northern areas of Pakistan are dependent on these glaciers as this is the source of their drinking water and their agriculture. If these glaciers disappear, then life would be difficult for these people as these act as a center point for the environment. This would also affect tourism, because once these glaciers will disappear it will change the landscape appearance, hence there would be no attraction for the tourists.

Soaring of the earth’s temperature has threatened many glaciers in the Himalayas, the Karakoram and the Hindu Kush range and the glaciers in Gilgit Baltistan are melting at the faster pace thus jeopardizing people’s livelihood.  A continuation of such melting of glaciers would result in a number of striking changes in the region of Gilgit-Baltistan i.e. avalanches, and GLOFs, etc.

In order to save glaciers from further melting, we should halt global warming by decreasing the emission of greenhouse gases and increasing the plantation process. Global warming is melting the glaciers, therefore putting people’s lives in danger not only in Pakistan but all over the world. If the global warming goes unchecked, many if not all world’s glacier could disappear by the end of this century. In order to save the planet earth from further catastrophes, we have to change our ways or climate change is going to do it for us.

*Huma Kashif is working as an independent researcher with a Research think tank based in Islamabad, Pakistan and holds a Postgraduate degree in International Relations from Quaid-e-Azam University, Islamabad and has a keen interest in writing about International politics, Political Economy and Geopolitics of Eurasia.