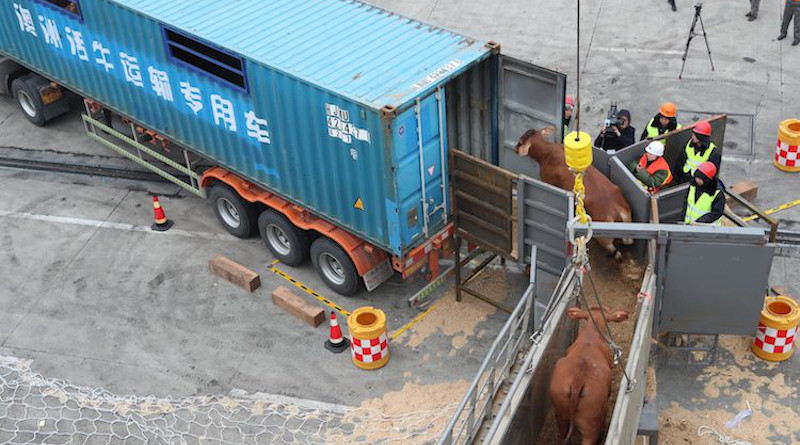 Beef cattle imported from Australia are being transported on to a truck in a port in east China's Zhejiang province. January 28, 2018. Source: East Asia Forum.

In 2016, the Executive Director of the Australian Strategic Policy Institute (ASPI) Peter Jennings warned that “if Beijing wants to adopt politically coercive policies, it’s in a fairly strong position to do so with us because of that level of trade dependence”.

COVID-19 has heightened sensitivities as news stories draw attention to examples of Chinese demand wavering and supply chains being disrupted. China’s own actions have added more fuel to the fire.

Rather than unequivocally stating that the Chinese government would continue to support trade ties even in the face of political disagreements, Chinese Ambassador to Canberra Cheng Jingye instead mused last month (April 2020) that consumers in China might come to view Australia as unfriendly and be less fond of its beef, wine, tourism and education. This was quickly followed up by trade restriction measures applied to Australian barley and beef exports to China.

In April, ASPI’s Director of Defence and Strategy Michael Shoebridge argued that “with COVID-19, the Chinese state has created unacceptable risks for the rest of us and it will continue to do so … until we reduce our dependence on activities within its jurisdiction”.

On May 2, Peter Jennings claimed that “a view is hardening that economic dependence on China is dangerous and steps must be taken to reduce that dependence”.

There have also been suggestions that Canberra would benefit from signing on to Washington’s own China decoupling agenda.

In April, Paula Dobriansky argued in the Wall Street Journal that the United States and partners like Australia should “create an international economic order that is less dependent on China”, one in which trading ties “better align … with political and security relationships”.

Charles Edel followed up with an assessment that “our existing alliances now have the opportunity to move beyond the military realm and into the economic arena”.

But Australia’s circumstances are vastly different from those of the United States, with a domestic market of just 25 million people and a trade bundle that matches China’s.

For all the attention that instances of possible Chinese economic punishment directed at Australia receive and despite serious political tensions since 2017, two-way trade currently stands at US$235 billion, a record high. This is more than 2.5 times greater than Australia’s trade with Japan, in second place.

These market-driven outcomes do not rule out the possibility of niche areas where Australia-U.S. cooperation could pass some sensible cost-benefit test.

For example, questions have previously been raised around the resilience of supply chains for rare earth metals. The Productivity Commission could undertake an investigation and invite national security analysts to detail their concerns. If a problem is revealed, the Commission could then recommend appropriate government interventions.

The COVID-19 shock to the Australian economy is global, not China-specific.

Having quickly controlled the public health crisis, China is the first major economy to begin a slow return to something approaching normality.

Even in the first four months of 2020, when the Chinese government locked down its economy to control the spread of COVID-19, the value of Australian goods exports to China stood at US$37.8 billion. This was actually up 2.7 per cent compared with the same period in 2019.

This year, the International Monetary Fund expects Australia’s economy to shrink by 6.7 per cent. With 33 per cent of exports going to China where the economy is forecast to grow by 1.2 per cent, Australia remains better placed than some peers.

Pity Canada, which relies on the United States to buy 75 per cent of its exports, but which is forecast to contract by 5.9 per cent.

Or the United Kingdom with 45 per cent of exports going to an EU market set to go backwards by 7.5 per cent.

It’s one thing to remind Australian businesses they need to take seriously the prospect they could find themselves a target of Chinese government retaliation. But it’s quite another to advocate that Canberra should insist businesses undertake the economic equivalent of self-harm.

Australian businesses are not ignorant of risk; they engage with China because there is no comparable market.

Over the past decade the annual value of Australia’s exports has increased by a net AU$180 billion (US$117.5 billion). But this has only been possible because one country delivered 60 per cent of the jump: China.

Any opportunities in China that Australian businesses were forced to leave on the table would quickly be snapped up by international competitors.

The frequency with which misinformation is appearing in discussions of the Australia-China economic relationship is also alarming.

China may be involved in manufacturing inputs like active pharmaceutical ingredients, but European and American pharmaceutical giants like Pfizer and Roche mostly control the global value chains that absorb these. With the world’s second largest pharmaceutical market, it is hardly surprising that China should have significant production capabilities.

Now more than ever, facts and evidence around Australia’s economic relationship with China are needed, not vague policy propositions accompanied by sound-bites that appear intended to scare.

The author is Professor and Director of the Australia-China Relations Institute at The University of Technology Sydney (UTS). This article first published on May 24 in EastAsiaForum, is part of an EAF special feature series on the novel coronavirus crisis and its impact.