U.S. refining capacity has always fluctuated, expanding or contracting with market conditions, changes in consumption patterns, and changes in product specifications. So has the corporate ownership of U.S. refineries, with some individual plants changing hands multiple times in their history. Last year was no exception: 2011 saw numerous refinery sales and several plant closures. There have already been additional changes this year, as the refining landscape continues to evolve, and further changes may occur before the end of the year.

The U.S. Energy Information Administration (EIA) keeps track of changes in U.S. refining ownership and overall capacity on an annual basis. According to the latest EIA Refinery Capacity Report released June 22, there were, as of January 1, 2012, 144 operable refineries in the United States with capacity totaling 17.3 million barrels per calendar day (bbl/d), 414,000 bbl/d lower than on January 1, 2011 (Figure 1). The decrease in capacity is mostly due to the closure of two refineries in Pennsylvania; Sunoco’s Marcus Hook refinery and ConocoPhillips’ Trainer refinery. 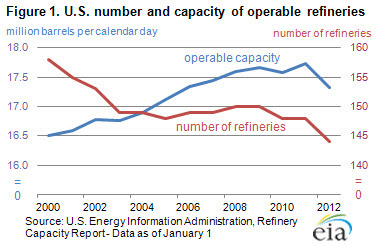 Looking into 2012, EIA completed detailed analyses of the potential impact of these refinery closures in its report Potential Impacts of Reductions in Refinery Activity on Northeast Petroleum Product Markets released in February 2012, and Energy In Brief released in May 2012. Since the release of these reports, however, Delta Air Lines has agreed to purchase the Trainer plant, which has a capacity of 185,000 bbl/d. To date, there has been no determination as to when the refinery will once again operate. Meanwhile, Energy Transfer Partners agreed to acquire Sunoco, which earlier had stated it would close its Philadelphia refinery by August 1 if no buyer was found. Potential buyers have reportedly emerged for that plant, and its outlook remains unclear. Finally, it should be kept in mind the data as of January 1 do not reflect other important refinery capacity developments since the start of 2012, including the 325,000-bbl/d crude distillation expansion of the Motiva refinery in Port Arthur, TX, now clouded by an industrial accident that occurred in early June.

While the amount of crude distillation capacity is the single most widely tracked capacity indicator, capacity for other types of refinery units can follow a different pattern over time, as refiners invest in specific types of capacity needed to support their desired input and product slates. Overall, 2011 saw a slight decrease in capacity for catalytic cracking, catalytic reforming and hydrotreating. This is due in part to the refinery closures on the East Coast, Petroleum Administration for Defense District (PADD) 1. However, vacuum distillation capacity, coking capacity and hydrocracking capacity increased. Expansions at WRB’s Wood River, Illinois refinery and Total’s Port Arthur, Texas refinery helped mitigate the PADD 1 declines.

Of the 144 operable U.S. refineries recorded by the EIA Refinery Capacity Report, 134 were operating and 10 were idle as of January 1, 2012. A refinery is considered idle if the atmospheric crude oil distillation unit (ACDU) is not in operation and not under active repair, but capable of being placed in operation within 30 days; or the ACDU is not in operation, but under active repair that can be completed within 90 days. Based on the definition above, refineries are considered to be idle if on January 1 they are not in operation for any number of reasons including routine maintenance, unplanned maintenance, or market conditions.

Refinery sales in 2011 included the merger of Holly Corp with Frontier Refining and Marketing, bringing HollyFrontier Corporation’s total refinery capacity to 470,350 bbl/d. Murphy Oil Corporation sold both of its U.S. refineries last year. Valero Energy Corporation purchased Murphy’s Meraux, Louisiana refinery, and Calumet Lubricants purchased its Superior, Wisconsin refinery. On May 1, 2012, ConocoPhillips split into two stand-alone, publicly traded corporations. The downstream operations and nine refineries in the lower 48 states will be owned by Phillips66, and the refinery in Prudhoe Bay, Alaska will remain under ConocoPhillips.

With the purchase of the Meraux refinery, Valero is once again the largest U.S. refiner, with total capacity of 1.863 million bbl/d as of January 1, 2012. ExxonMobil was a close second with 1.856 million bbl/d. ConocoPhillips fell to third largest while BP PLC and Marathon Petroleum Corporation ranked fourth and fifth, for the third consecutive year. These five companies make up 45 percent of total U.S. refining capacity.

Home » US Refinery Capacity: Final Data For 2011 And Developments In 2012 – Analysis