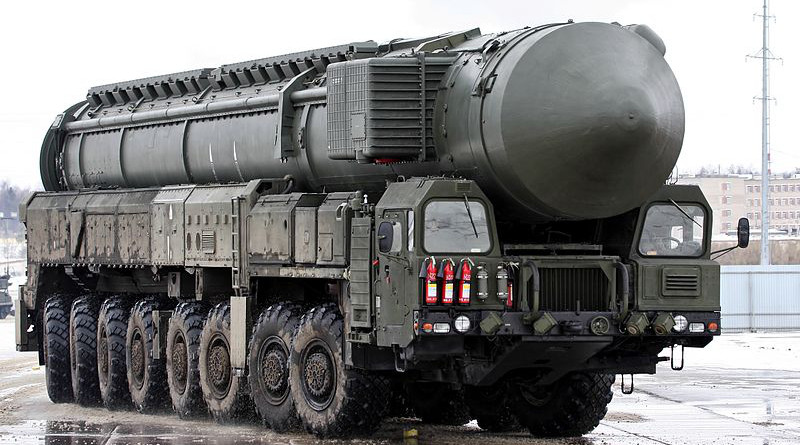 On June 2, 2020, Russian President Vladimir Putin signed into law the country’s new nuclear strategy, titled “Basic Principles of State Policy of the Russian Federation on Nuclear Deterrence.”1 This is the first time that Kremlin has publicly released a strategic nuclear planning document. While largely in sync with Russia’s 2014 Military Doctrine, the new six-page document, nevertheless, sheds light on the Kremlin’s nuclear rethink. This includes the rationale for a more robust nuclear deterrence and conditions that may entail the launch of nuclear weapons, including their ‘first use’.

Against the backdrop of these developments, several pertinent questions arise about the nature of Russia’s new nuclear strategy, the timing of its release, and the message it seeks to convey to its adversaries and allies alike.

Russia’s 2020 nuclear doctrine seeks to balance the rhetoric of using nuclear weapons with the document’s core emphasis on the strategy being ‘defensive by nature’. Russian nuclear weapons are viewed primarily through the prism of maintaining a credible deterrence against potential adversaries. It calls upon the Kremlin to leave no stone unturned to increase the nuclear threshold before contemplating the deployment of nuclear weapons as a last resort. In this context, the document’s focus on ‘inevitability of retaliation’ and inflicting ‘guaranteed unacceptable damage’ blends in with the widely acknowledged principles of nuclear deterrence.2

The strategy identifies six key ‘risks’ to Russia and its allies posed by Moscow’s adversaries which have the potential to translate into ‘threats’ that warrant ‘nuclear deterrence’. Some of the notable dangers include the build-up of nuclear forces and weapons of mass destruction (WMDs) and the deployment of missile defence including cruise and ballistic missiles in areas contiguous to Russia. In recognition of the new frontiers of modern-day warfare, the document also highlights the spectrum of threats emanating from the deployment of “missile defence assets and strike systems in outer space” as well as “non-nuclear high-precision and hypersonic weapons, strike unmanned aerial vehicles, and directional energy weapons.”3 It reaffirms the view that Russian nuclear deterrence remains anchored in the triad of land, sea and air-based nuclear forces.

While the document does not single out Russia’s adversaries yet its tone and tenor clearly points to the North Atlantic Treaty Organisation (NATO) as Moscow’s principal opponent. As stated in the document: “The Russian Federation implements its nuclear deterrence with regard to individual states and military coalitions (blocs, alliances) that consider the Russian Federation as a potential adversary and that possess nuclear weapons and/or other types of weapons of mass destruction…”4

Interestingly, a paragraph under the section ‘essence of nuclear deterrence’ gives credence to the Western allegations of Russia having an ‘escalate to de-escalate strategy’ anchored in the use of tactical nuclear weapons to tip the balance in favour of Moscow. The nuclear document states that “In the event of a military conflict, this Policy provides for the prevention of an escalation of military actions and their termination on conditions that are acceptable for the Russian Federation and/or its allies”.5 On its face value, this can be interpreted as leaving the door open for Russia’s limited use of tactical nuclear weapons in a battle fought with conventional arms. However, the devil always lies in the details. The fact that this paragraph falls under the section ‘general provisions’ and not ‘conditions for the transition to the use of nuclear weapons’ highlights its nuanced underplay. Notably, the fallout of a nuclear conflict, albeit a limited one, in Russia’s periphery is unlikely to spare the Russian borderlands. It is, therefore, likely that the wording of this section, while upping the ante, has been deliberately kept ambiguous – a key hallmark of deterrence – to keep a conventionally superior opponent guessing about Russia’s next lethal move in the battle chessboard.

Arguably, ambiguity is the strength of this document. This is also reflected in the wording of the definition of ‘allies’ and ‘WMDs’. It is not clear if Russia will come to the aid of its allies and which allies will these be.

Crucially, the nuclear strategy outlines four scenarios which may result in Russia launching its nuclear weapons. While maintaining an element of continuity with the 2014 Military Doctrine which justifies their usage in the event of a nuclear and WMD attack on Russia, the three additional premises raise the stakes further by bringing into equation the concept of ‘first strike’. These conditions include the receipt of reliable data on the launch of ballistic missiles targeting Russia and an existential threat to the country emanating from conventional weapons. Similarly, an attack against critical governmental or military sites that undermines Russia’s nuclear response can also trigger nuclear retaliation. This likely brings a massive cyber-attack, designed to cripple the Russian nuclear infrastructure, into the Kremlin’s ‘first use’ matrix.

Timing and Signalling of Strategy

The timing of the release of the nuclear strategy may be attributed to Russia’s ongoing competition and confrontation with the West. Their rivalry in the nuclear theatre is particularly borne out by the recent collapse of landmark arms control agreements including the Intermediate-Range Nuclear Forces (INF) and the Open Skies treaties. The future outlook of even the 2010 New Strategic Arms Reduction Treaty (START), formally known as ‘Treaty on Measures for the Further Reduction and Limitation of Strategic Offensive Arms’, considered a cornerstone of the United States (US)-Russia strategic stability, appears bleak. The US has already signalled the possibility of walking away from it.6 This American sentiment is anchored in its 2018 Nuclear Posture Review (NPR) which highlights Moscow’s ‘repeated violations’ of the strategic weapons control architecture.7

Notably, for Russia, these exclusive arms negotiations with the US have been a recognition of its position as a key pole in global affairs. They have intrinsic leverage in Moscow’s ties with the US. These negotiations not only help Moscow project itself as a responsible global actor but also negate the perception of it being isolated on the global stage. With the New START Treaty due to expire in February 2021, time could be running out for Russia to salvage the Treaty. The new nuclear strategy could be Russia’s last roll of the dice to force the US back to the negotiating table. Russia’s pressure tactics appear to have had an incipient effect as Washington has invited Moscow for nuclear talks, scheduled to be held in June 2020, after months of dithering.8

Today, nuclear weapons are Russia’s proverbial insurance against Western conventional military superiority. In this context, the core security stakes for Moscow have never been higher, especially at a time when the US has upped the ante by outlining its intentions of modernising its nuclear arsenal.9 This may erode the nuclear parity between the two strategic competitors who have increasingly viewed each other as an adversary. As such, the new nuclear document conveys Russia’s determination to maintain the existing nuclear equilibrium with the US. Failure of the upcoming talks could open up the prospect of a new arms race between the world’s two biggest nuclear powers unchained by strategic arms control agreements.

Moreover, given the US attempts to contain Russia in its neighbourhood, the nuclear document also highlights Russia’s red lines which, if breached, may lead to nuclear retribution. These ostensibly include NATO’s build-up in Eastern Europe, military exercises in Russia’s periphery, installation of missile defence and development of outer space weapons. The reference to ‘protecting Russia’s territorial integrity’ likely signals the non-negotiable status of Crimea. Arguably, this strategy seeks to overcome Russia’s perceived power asymmetries and vulnerabilities. The document, therefore, can be seen through the lens of Russia’s strategic communication with the US, at a time when prospects of negotiations are fast depleting.

Notably, Russia’s red lines put NATO’s East European members in Moscow’s nuclear crosshairs. The Kremlin would likely have factored in its nuclear doctrine the frayed trans-Atlantic partnership which has led European countries to question the reliability of the US security umbrella. Perhaps, by raising the nuclear stakes, Russia is seeking to tap the latent European fear of abandonment, which has led the European Union (EU) to focus on achieving greater self-reliance and strategic autonomy, and build a détente with the European continent. The Kremlin could also be signalling the potential NATO members of the nuclear threats that lurk in the membership of the military alliance. On the contrary, the document, while not being the Holy Grail, may end up strengthening the prevailing Russophobia in the West.

Interestingly, the nuclear document has reaffirmed the evolving Russia-China entente. Over the last few years, there has been a growing understanding between Moscow and Beijing over each other’s core security concerns. This sentiment was aptly reflected in the Chinese Foreign Ministry Spokesperson’s response to Moscow’s new nuclear strategy. The spokesperson stated that “China respects and understands Russia’s efforts to safeguard its national security interests”. Highlighting their shared global apprehensions, the spokesperson, in an oblique reference to the US, went on to add that “rising unilateralism and hegemonism in international strategic security is having a severe impact on global strategic equilibrium and stability”.10

Notably, the US had labelled both Russia and China as ‘revisionist powers’ and ‘strategic rivals’ in its 2018 National Defence Strategy and 2017 National Security Strategy.11 Nevertheless, given the chequered Sino-Russian history, lingering suspicions of each other and with balance of current ties tilting towards China, the core message of Moscow’s nuclear deterrence and ‘first use’ is unlikely to have been lost on Beijing. The fact remains that China continues to quantitatively and qualitatively improve both its nuclear and conventional arsenal while its military budget dwarfs Russia’s. At its current pace, the strategic military parity between them might not be too distant in the horizon.

Overall, Russia’s new nuclear strategy is both a tactical and a strategic document. There are elements of ambiguity as well as the postulation of clear red lines. This could be seen as a calculated move that leaves the door open for adversaries to recalibrate their strategies while giving Russia the scope to manoeuvre the ongoing turbulence in its ties with the US. It can even open up new avenues of strategic negotiation between the world’s two most formidable nuclear powers. For now, a nuclear conflict between them may not be inevitable. However, in the current hostile climate, there is no gainsaying of the dangers of a nuclear flashpoint lurking in the background.

*About the author: Rajorshi Roy is Research Analyst at the Manohar Parrikar Institute for Defence Studies and Analyses, New Delhi.