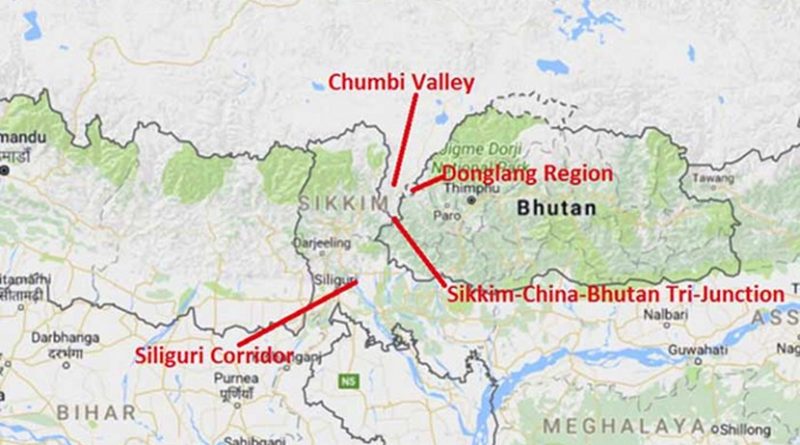 The standoff between Chinese and Indian troops at Doklam plateau in Bhutan has begun causing anxiety among people in India and abroad. The Indian government has so far remained calm and balanced and refused to be cowed down by an unusually hostile government-controlled Chinese media and also remained unprovoked by unsolicited advice and hysterical rhetoric of many self-styled China watchers and strategic experts. The government is trying to defuse the tension diplomatically and has taken opposition parties into confidence. But why is China is refusing to come to the negotiating table and not cooperating in bringing down temperatures?

An important issue in this case is that the disputed territory belongs to Bhutan but the standoff is between the armies of India and China. It is important to understand the special relationship that exists between India and Bhutan. Traditionally the Kingdom of Bhutan and India have enjoyed very friendly and cordial relations. India’s contribution towards building of modern infrastructure in Bhutan has been tremendous. Both countries signed a treaty of cooperation and defence in 1949, which was amended in 2007 to the Indo-Bhutan Treaty of Friendship 2007.

Article 2 of the Treaty states:”In keeping with the abiding ties of close friendship and cooperation between Bhutan and India, the Government of the Kingdom of Bhutan and the Government of the Republic of India shall cooperate closely with each other on issues relating to their national interests. Neither Government shall allow the use of its territory for activities harmful to the national security and interest of the other”.

To honour this treaty, Indian troops entered Bhutan where China was constructing a road, from Senchen La, located at the southern tip of Chumbi Valley, up to Zompleri, the sole Bhutanese border outpost in Western Bhutan guarding the Doklam plateau. China claims Doklam plateau, an 89 sq km pasture that falls close to Chumbi valley at the corner of the India-Bhutan-China tri-junction, not far from the Sikkim sector.

China, citing the 1890 China-Britain treaty, calls Doklam (referred by China as Donglang) its own while Bhutan has disputed the fact saying the convention applies to the India-Bhutan border, not Bhutan and China. By invoking the 1890 treaty China has added a new strategy to the border dispute called “lawfare.”

“Lawfare” is defined as a ‘strategy of using – or misusing – law as a substitute for traditional military means to achieve an operational objective.’ India also needs to develop a resource pool for exploitation of “lawfare” to counter growing Chinese assertiveness and resolve other issues with its neighbours to its advantage using legal provisions.

Indian officials have said that the road construction by the PLA is aimed at getting closer to Doka La, the last Indian military post on its border with Bhutan. China has repeatedly asserted its claim over Donglang (Doklam) and accused Indian troops of trespassing.

“In order to cover up the illegal entry by Indian troops into the Chinese territory, Indian side wants to infringe upon Bhutan’s sovereignty and they try to confuse right from wrong. This is futile. We have no objection to normal bilateral relations between India and Bhutan but are firmly opposed to the Indian side infringing on Chinese territory using Bhutan as an excuse,” said Geng Shuang, Chinese spokesperson.

China has launched a disinformation campaign to mislead international opinion. For several decades, China has accused India of forcing Bhutan not to allow opening of its diplomatic mission in Thimphu. Only India and Bangladesh now have embassies in Bhutan, and Bhutan maintains contacts with China through the Chinese Embassy in New Delhi. China is not happy with the status quo and wants this to be altered in its favour.

The current standoff is not only a border issue but a territorial issue as well. Forcible occupation of other nation’s territory has been part of the Chinese statecraft from the imperial days and is being faithfully followed by the present Communist regime. China is used to bullying its neighbours to submit to its demands and diktats. That is why it solved its land border disputes with other neighbours when it was in a comparatively stronger position vis a vis the adversary nation.

With India, China has not been very keen for early resolution of the border disputes because it perceives India as a competitor towards gaining strategic space in the emerging world order. It wants to keep India permanently anxious and unbalanced.

“A frontier of thousands of miles between two powerful nations holding each other in mutual contempt seems to point at anything but peace.” India-China relations have been growing steadily except the security relations. Security relations between the two countries cannot improve while there is a disputed border. A demarcated border is not the only dispute.

China’s claim to a large chunk of Indian territory, including the state of Arunachal Pradesh, is a problem.

India has always sought an early resolution of the border issue but the Chinese had been dilly-dallying saying “to leave it for future generations to resolve”. Since the rise of Xi Jinping in China there has been a shift in the Chinese stand and it is also talking of settling the border dispute early in China’s favour. In the Chinese perception due to its massive economic growth and conversion of People’s Liberation Army (PLA) into a modern war machine with dominance in cyber space and adequately high Comprehensive National Power (CNP), a window of opportunity exists for China to force India to agree to border resolution according to the Chinese terms.

It also apprehends that, given India’s progress, the window may not be available beyond 2020. By choosing the present site of the standoff, it aims to kill two birds with one stone because it feels that if India succumbs to the pressure Bhutan automatically will.

A brief peep into the Chinese mind set will help understand China’s intent more clearly. According to a senior general of PLA, “When a nation grows strong enough, it practices hegemony. The sole purpose of power is to pursue even greater power——–Geography is destiny——-When a country begins to rise, it shall first set itself in an invincible position”.

The dragon is riled at India’s refusal to accept Chinese hegemony and pursue an independent path based on her national interests. China is annoyed due to many recent moves of the (Narendra) Modi Government and has manipulated the current standoff. Coercion forms an important ingredient of the Chinese war fighting doctrine. One of the important phases of Chinese military strategy is, “Achievement of Political Objectives through Coercion”. China is an ardent advocate and practitioner of coercive security strategy “Shi” to secure advantage. Sun Tzu said, “To win one hundred victories in one hundred battles is not the acme of skill. To subdue the enemy without fighting is the acme of skill”.

China is going ahead with containment of India to keep India confined to the back waters of the Indian Ocean. Its policy of ‘string of pearls’ and the Belt Road Initiative (BRI) is aimed to contain India. The first ever Chinese military base abroad at Djibouti in the Horn of Africa is also meant to allow PLA Navy (PLAN) to challenge the Indian Navy in the Indian Ocean.

China Pakistan Economic Corridor (CPEC) and development of Gwader port will provide enough strategic leverage to challenge India’s might in the region.

The presence of Chinese troops in POJK and their reported presence in terror training camps has added a new dimension to the prevailing security scenario in J&K. CM Mehbooba Mufti needs to be taken seriously when she refers to “external forces meddling in Kashmir affairs”.

China has deliberately propped up Pakistan as an adversary of India and is providing financial, military, nuclear and moral support to Pakistan to continue to wage the proxy war. Terrorism and radicalisation are a means to an end; “to contain India and weaken the Indian economy.”

What are China’s objectives in the current standoff?

Briefly, these are; to test the resolve of the Modi government against Chinese hegemony despite strong signals to the contrary; to coerce India to withdraw her troops from Bhutan so that it can grab the strategic Doklam plateau, thus threatening the Siliguri Corridor and deny a launch pad to Indian troops; force India to permit construction of the road so that it can then do the same in Gilgit-Baltistan to complete its prestigious CPEC project; portray India as an undependable ally to the Royal Government of Bhutan and force it to have direct diplomatic ties with China, side-lining India; pressurise India to join the BRI, the project aimed at strengthening Chinese hegemony; reduce growing Indian influence among SAARC nations and wean them towards China; keep India on tenterhooks as far as the Siliguri corridor, India’s lifeline to North-East, is concerned and fuel insurgent movements in NE; to brow beat India to submit to Chinese dominance in Indo-Pacific region and stay away from the South China Sea region and snub India because of her growing strategic relations with USA, Japan and Israel.

India’s approach so far has been mature and worthy of a nation that is shedding the image of a “soft state”. India’s strategy revolves around both sides honouring the 2012 agreement signed by them, coupled with a matching military response locally. India should continue to strive to find a diplomatic solution and not succumb to Chinese manipulations and threats.

India’s National Security Adviser Ajit Doval is scheduled to visit Beijing on July 26 to attend the meeting of NSAs from BRICS — Brazil, Russia, India, China and South Africa. He is expected to raise the issue with his Chinese counterpart Yang Jiechi. Hopefully by then the Chinese would have been convinced of India’s resolve to not to give in to coercive Chinese strategy.

*The author is a Jammu-based political commentator and security and strategic analyst. The author has served in Bhutan and dealt with operations. He can be contacted at [email protected]