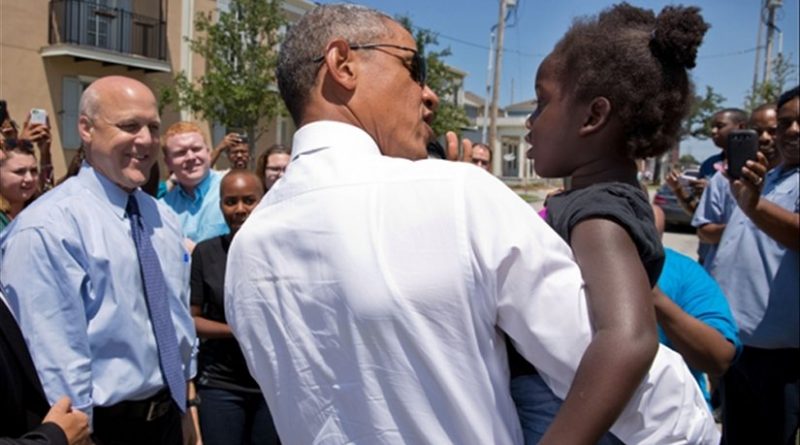 What started out as a natural disaster became a man-made one—a failure of government to look out for its own citizens.

He then, typically, dissembled the argument, pointing to a mish-mash of “economic inequality … a country that tolerated poverty.”

As those of us with memories based in facts know, Hurricane Katrina itself left New Orleans relatively unscathed. Initially, everyone breathed a sigh of relief: Katrina had veered, had dissipated, the feared devastation had not occurred.

And then came the levee failures—more than 50 levees and flood walls built and maintained by the government failed:

The levee and flood wall failures caused flooding in 80% of New Orleans and all of St. Bernard Parish. Tens of billions of gallons of water spilled into vast areas of New Orleans, flooding over 100,000 homes and businesses. Responsibility for the design and construction of the levee system belongs to the United States Army Corps of Engineers; the responsibility of maintenance belongs to the local levee boards. [Emphasis added]

The disaster itself, then, was a direct result of government failure.

And then came the aftermath:

[T]he New Orleans mayor’s and Louisiana governor’s offices … both expressed frustration and helplessness, caused by having no plans for an emergency of this magnitude. The mayor’s office set up operations in the privately owned and operated Hyatt hotel, judged the safest base. They were equipped with old field-type phones that couldn’t be recharged. Both the governor and mayor claimed they were paralyzed by lack of communication, and pointed the finger at the feds’ failure to come to the rescue. The entire governmental response, from top to bottom, was beset by lack of leadership, action, and absolutely no coordination or communication between any two agencies. It had been immediately pointed out following 9/11 that much of that rescue effort was hindered and many of the deaths of firefighters and police were due to the inability of rescue agencies to communicate among and between themselves. Yet four years later, and despite billions of dollars distributed to and by the new Dept. of Homeland Security, the exact same systems were in place.

When one mayor in Louisiana called FEMA to get supplies, he was put on hold for 45 minutes. Eventually a bureaucrat promised to write a memo to his supervisor. Evacuees on a boat could not receive permission to dock along the Mississippi river. A sheriff was told he could only get the help he was seeking if he emailed his request—of course, his parish was flooded and without electricity.

School buses sat idle in parking lots—contrary to the City of New Orleans’ emergency plan that called to use such buses to evacuate residents to safety—not to the Superdome, which lay within the threatened area. Furthermore, the Superdome had been used as emergency shelter before, and there had been violence and civil disorder within it on those occasions. Yet no provision had been made to prevent the recurrence of such violence that had occurred before and worsened under the “hell-like” conditions following Katrina. The people in the Superdome were essentially held under house arrest, not allowed to leave or even go outside for fresh air. No provision was made to provide them food, water, sanitation, counseling, or even communicate to them what was happening and what they could expect. It’s little wonder that such desperate “Lord of the Flies” conditions led to a breakdown in civil society. It could have been a laboratory study in what happens when you treat people like cattle—only worse, because cattle owners feed and water their stock.

A group of 500 guests in French Quarter hotels pooled their resources to come up with $25,000 to charter buses to come and rescue them, subsidizing those without the means to contribute. They waited 48 hours for the buses whose arrival was said to be “imminent,” only to learn that the military had commandeered them as soon as they arrived in the city. Once kicked out of the hotels, “by orders,” they learned they would not be allowed in either of the two city shelters—the Convention Center and the Superdome—which had descended into humanitarian and health hellholes. Yet neither could they leave the city—those trying to leave the city on foot were turned back by armed police, “protecting” neighboring cities from fleeing evacuees. Only those with transport could leave, yet, as we’ve seen, transport was denied them.

Companies wanting to send in planes and helicopters to rescue their people were prohibited from doing so. One company contacted Louisiana Congressman Bobby Jindal’s office for help identifying who could grant them permission to send in a helicopter to rescue their stranded employees. Unable to find anyone at FEMA, the FAA or the military who would accept responsibility to grant permission, the congressman advised the company to just go ahead.

What is probably most inexcusable and has been kept relatively quiet is that the Red Cross and the Salvation Army were staged and ready to enter New Orleans with food, water and other emergency supplies. The roads to the Superdome and the Convention Center were open, and other areas of the city remained similarly accessible. But the Louisiana Dept. of Homeland Security denied them permission to go in, saying their presence would “prevent people from leaving.”

In the ultimate, horrible example of a bureaucratic Catch-22, the government kept people from leaving New Orleans, and the Dept. of Homeland Security would not let aid agencies in, saying having aid available in the city would create a magnet to keep people from leaving.

Home » Obama Is Half Right About Katrina – OpEd

One thought on “Obama Is Half Right About Katrina – OpEd”