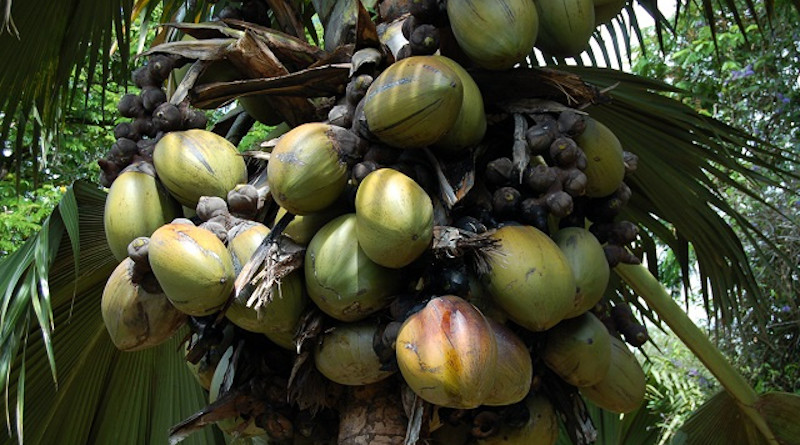 The coco de mer, otherwise known as Lodoicea, is the world's largest nut and endemic to Seychelles. (Gerard Larose, Seychelles Tourism Board)

The Seychelles National Parks Authority (SNPA) plans to hold several sales of coco de mer to generate revenue now that income from the tourism sector has decreased due to COVID-19, said a top official.

The first sale took place recently at the Botanical Gardens where around 100 coco de mer nuts, which ate endemic to Seychelles, were on display. The next sale will take place in October.

Speaking to SNA, the chief executive of SNPA, Selby Remy, said travel restrictions between March and July greatly affected business and that national parks, such as Curieuse and Veuve Reserve on La Digue, had to remain close as they both depend on foreign visitors. Despite the reopening of the airport on August 1, travel is yet to pick up and currently there are fewer visitors and flights coming to Seychelles than normal.

“Although we are not getting revenues from tourism, we still need to fund other operations, so we decided to look at other ways to raise money to compensate for the loss of revenue from tourism,” said Remy.

The Authority which is responsible for all the marine and terrestrial national parks of Seychelles also wanted to make the nuts accessible to the public.

He said having a nut on display in a Seychellois home “is considered a luxury and part of our heritage so we want everybody to get a chance to buy one.”

The damaged nuts which were selling at lower prices are used for crafts.

The nuts on sale were collected from the Praslin national park and Curieuse island, which are managed by the SNPA. The authority had planned to raise around an SCR 100,000 ($5,582) in their first sale but only collected around SCR70,000 ($3,900).

The coco de mer, otherwise known as Lodoicea, is the world’s largest nut and endemic to Seychelles, an archipelago in the western Indian Ocean. The species is listed as endangered on the International Union for Conservation of Nature (IUCN) Red List of threatened species

The nut grows naturally in the Vallee de Mai, a UNESCO World Heritage located on Praslin, the second-most populated island which is managed by the Seychelles Islands Foundation (SIF). It also grows on neighbouring Curieuse Island.