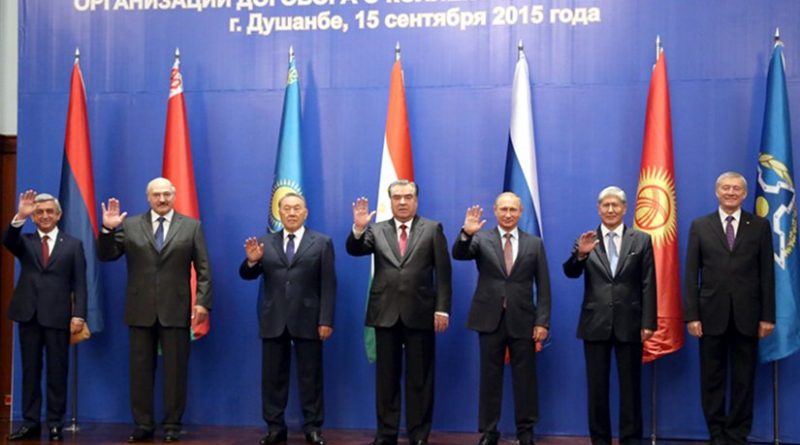 The Collective Security Treaty Organization (CSTO) was established on 15 May 1992 after Russia’s initiative and can be considered the ideological heir to the Warsaw Pact, albeit of a considerably lesser quality. Russia was aware that the previous military bloc it headed has come to its end, so it was required to establish a new one in order to stand against NATO. Thus, the CSTO was created but it can’t be considered a significant military bloc.

The following countries are CSTO members: Russia, Tajikistan, Kyrgyzstan, Kazakhstan, Belarus and Armenia.1 None of these countries, with the exception of Russia, can be considered independent, i.e. the economic and military potential of all the other CSTO member states is intended for the sole purpose of supplementing Russia. This means that the organizations works in Russia’s interests.

In addition to the CSTO, many former Soviet republics joined the Commonwealth of Independent States (CIS) – another pocket organization of Russia. This brings us to the most interesting part – the possibility of resolving the Nagorno-Karabakh conflict or, to be more precise, the unresolving of the conflict or selfmate.

Which are the states most directly involved in the Nagorno-Karabakh issue? Undoubtedly, Armenia and Azerbaijan, but Russia and Turkey are also key players in all of this.

Let’s begin by looking at the relations between all the engaged countries.

First, Armenia and Azerbaijan. The territorial dispute between both nations rules out the possibility of establishing any sort of peaceful relations. It would be more precise to say that both countries hate each other. But it is quite extraordinary that both of them are CIS member states. That is the true definition of a commonwealth.

Next, we have Russia-Armenia and Russia-Azerbaijan. Russia and Armenia both are part of the CSTO, CIS and the Eurasian Economic Union, while Russia and Azerbaijan share membership only in the CIS.

This means that Russia should have closer ties and cooperation with Armenia, but in reality the situation is the opposite. In 2019, the trade between Armenia and Russia was USD 2.6 billion, while the trade between Azerbaijan and Russia reached USD 3.2 billion. This means that Russia trades less with the country that it has closer cooperation with than with the country with which it doesn’t have such a close cooperation.

Now comes the most interesting part – Russia has signed several military cooperation agreements with both countries and is supplying armaments to both Armenia and Azerbaijan.

This is a table comparing Russian armaments deliveries to both countries in the last ten years:2

We can see that Russia delivered more armaments to Azerbaijan – not to its CSTO ally Armenia, but instead to Armenia’s enemy.

The delivered armaments give us some quite interesting conclusions. In the reference period, both countries received armaments to be used against each other. For instance, Azerbaijan received 100 tanks, while Armenia received 100 anti-tank missile systems. This further indicates that Russia wants for the conflict in Nagorno-Karabakh to escalate.

This is also suggested by the fact that Russia and Armenia are CSTO member states, and Article 4 of the organization’s treaty,3 just as NATO’s Article 5, intends mutual assistance in cases of an armed attack or threats to the security, stability and territorial integrity against a member state – a threat against one member is considered a threat against all members.

The conflict between Armenia and Azerbaijan over Nagorno-Karabakh has been present for quite some time, but it doesn’t seem that the CSTO is willing to engage. A logical question comes to mind – what point is there in being part of an organization that doesn’t fulfill its intended purpose? I will add that it is not only the CSTO that is idle, but also the CIS. Why is that?

The answer is simple: both the CSTO and the CIS were established for the sole purpose of furthering Russia’s interests. Currently, Russia benefits from the war between Armenia and Azerbaijan and, regardless of which country will emerge victorious, Russia will be the real winner.

In a sense, Russia can kill two birds with one stone by agreeing to a limited war in which Azerbaijan regains a part of its territory but doesn’t threaten the existence of Armenia. This would be a huge favor to Azerbaijan without Moscow having to lose Armenia because Armenia has nowhere else to go.4 Therefore, the CSTO and the CIS will be completely useless in case they decide to go against Russia’s interests.

But there is another player – Turkey which undoubtedly supports only Azerbaijan. However, there is one interesting aspect here as well: as we know, Turkey is a NATO member but in the summer of 2019 it procured S-400 air defense systems from Russia.5

Many NATO member states reprimanded Turkey for this decision, and the US excluded Turkey from participating in its F-35 fighter program.6

It’s interesting that Turkey bought S-400 systems from Russia, but now information has appeared that it intends to use the systems in Syria, including against Russian aircraft. There is also a version that Erdogan is ensuring against the repeating of past events – when the attempted coup against Erdogan took place, F-16 fighters were also used against him.7

We also cannot rule out another version – this was a way for NATO to acquire the S-400 systems. In this case, Russia’s need for money was greater than its security interests. This is not impossible because the USSR and later Russia sold its best armaments to China just to get some money. And now China has surpassed Russia.

Now, let’s return to the most important part – the current situation is an unmistakable signal to all CSTO and CIS member states that in reality both of these organizations are just a tool to further Russia’s interests, i.e. additional chess pieces in the hands of Putin.

Home » Everything Looks Good On Paper In Russia, Even CSTO – OpEd

2 thoughts on “Everything Looks Good On Paper In Russia, Even CSTO – OpEd”