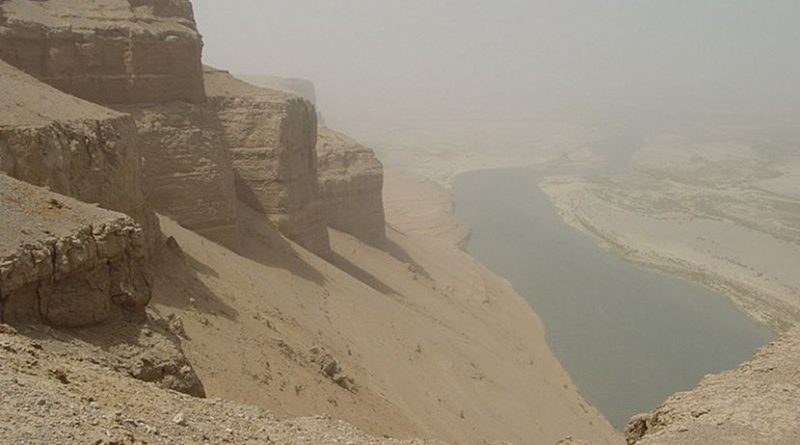 Recent climate change, arguably caused by excessive dependence on oil, has coincided with world-wide drought, and, in turn, water shortages. Growing water scarcity is the biggest problem of the twenty-first century. It is a global issue, as every living being needs water, and the number of countries suffering from shortages is rapidly increasing. Beyond sustaining us through drinking, water is just as important for global food production and, more recently, as a source of clean energy. It is more important than oil and becoming more and more valuable, too. The Middle East has been hit hard by these water shortages. Afghanistan, and the water that flows from within its borders, will play an important role in the region’s future, depending on how it manages its precious water resources.

Afghanistan is perched on the highest peaks of the Himalayan and Hindu Kush mountains. Its mountains stand more than 7,000 meters (23,000 feet) tall, and are largely covered with snow banks where waters flow from twelve months a year. Of the ten small and large rivers flowing from Afghanistan, two (the Helmand and Hari Rud) flow to Iran, and the Kunar River flows to Pakistan. The largest of them, Amu Darya (Oxus), starts from the highest peaks of the Pamir Mountains, which was once called roof of the world by Marco Polo. Amu Darya flows through Tajikistan, Turkmenistan, Uzbekistan and ends up pouring into the Aral Sea. Each of these countries consume Afghanistan’s waters.

Afghanistan’s water resources could lead to huge opportunities for its people, and the people of neighboring countries. Shockingly, in the past decade, only 5% of Afghanistan’s development budget has been for the development of the water sector, according to the Afghanistan National Development Strategy. Although these efforts may be considered small, a huge effort is spent on building dams that would produce electricity for internal power needs and revive Afghanistan’s agricultural system. Afghanistan’s neighbors might be exporting terrorism in the short-term, but they will need to be legitimate business partners to purchase Afghanistan’s water in the long-term. Against all their struggles with terrorism, Afghans have acknowledged their leverage and they have started making efforts on building necessary water infrastructure.

One such example of this enormous opportunity is the Salma Dam located on the Hari Rud River. The Salma Dam, inaugurated just recently in 2015, is one of the largest hydroelectric dams in Afghanistan. According to the Afghanistan Ministry of Energy and Water, this dam provides irrigation for over 80,000 hectares (197,600 acres) of land and 42 megawatts of electricity per day, which powers thousands of homes every day. Each of Afghanistan’s rivers could be used to generate internal power and greater agricultural production.

Currently, India and Afghanistan are the two major water supplies to Pakistan. Tensions between India and Pakistan have been stiff since the 1947 partition. Recently, their relationship rose tenser over terrorist activities on Indian soil, whose groups are claimed to have had sanctuaries in Pakistan. On September 22, 2016, Indian Foreign Ministry stated its intent to withdraw from the Indus Water Treaty of 1960 with Pakistan, if there Pakistan does not cooperate on terrorism matters.

The relationship between Afghanistan and Pakistan is also poor. Resulting from Pakistan’s border disputes with Afghanistan, Pakistan has provided support for the mujahidin faction over the last forty (40) years. The mujahidin faction has contributed to the civil war which continues to rage in Afghanistan. The Pakistan administration is under immense pressure from the international community, including the United States, whose Secretary of State, Rex Tillerson, stated that the United States is considering a policy change toward Pakistan, in part because of their activity leading to this instability in Afghanistan.

Despite the differences caused by Pakistan’s support of the mujahidin faction, over the past several years, Pakistan and Afghanistan have worked cooperatively toward the construction of a dam on the Kunar River. As part of this cooperative process, in June 2017, the President of Afghanistan, Ashraf Ghani, in an official trip to China, signed an agreement pursuant to which the Chinese government is to determine the feasibility of this ambitious project. With this dam in place, Afghanistan will benefit from the electricity generated, lands irrigated and prevent floods that affect hundreds of families every year. Large Pakistan cities are already hugely dependent on Kunar River water for day-to-day uses and agricultural purposes. Building a dam on the Kunar River will provide the following additional benefits to Pakistan like providing electricity, irrigation, and daily uses of water.

So long as the matter is approached in the appropriate manner, Afghanistan could leverage its rich water resources, including the Kunar River, along with international pressure, to resolve all border disputes with Pakistan. This leverage will increase as water becomes scarcer. Water could also be used as leverage to decrease any support or tolerance for terrorist organizations. Fair terms should be struck between Afghanistan and Pakistan for the best chance at a future of cooperation and peace between nations.

Unfortunately, not everyone is happy about Afghanistan’s recent dam building initiatives, which includes Iran. Beginning in the nineteenth century, disagreements have frequently arisen between Afghanistan and Iran that centered around allocation of the Helmand River. The two countries had agreed to several treaties regarding the use of this water, but these agreements failed mostly due to poor implementation. However, the 1973 Helmand River Treaty, signed by then-Afghanistan Prime Minister Daud Khan, remains intact.

Nevertheless, droughts having reached extreme peaks in Iran, with rainfall decreasing 60 percent compared to 2015. Underground water has started to vanish as the water level is declining by 0.4 meters per year due to digging of countless wells throughout the country which are now dry. The availability of water from dams is at risk because of less rainfall. Iran’s president, Hassan Rouhani, declared his concerns over the dam building efforts by Afghanistan. Afghanistan has allocated a certain amount of water to Iran based on trans-boundary waters law, they should manage Iran’s growing concern. As demands grow, Iran and Afghanistan need to peacefully renegotiate terms of the deal for more water flow to Iran.

Despite all the difficulty and small budget allocation of the past government, the new government is pouring a great amount of money and foreign aid to build the infrastructure necessary to benefit from its rich water resources and thereby secure the future of Afghanistan’s political and economic role in the region.

Afghanistan has abundant natural resources, mostly untapped. With even greater determination, future Afghanistan administrations should follow in the footsteps of the current government on taking control of water resources. In so doing, Afghanistan can emerge as a powerful business partner to its neighbors by becoming the future water haven for the region. In addition, Afghanistan could use water diplomacy to pressure its neighbors to fight against fundamentalism that has been haunting Afghans for decades.

*Mohammad Naser Akbar is a Financial and Business Economics student at York University in Toronto-Canada. Previously, he was management staff for Afghanistan Commercial Bank and president of the debate club at the American University of Afghanistan.

One thought on “The Water Within Afghanistan’s Borders – OpEd”