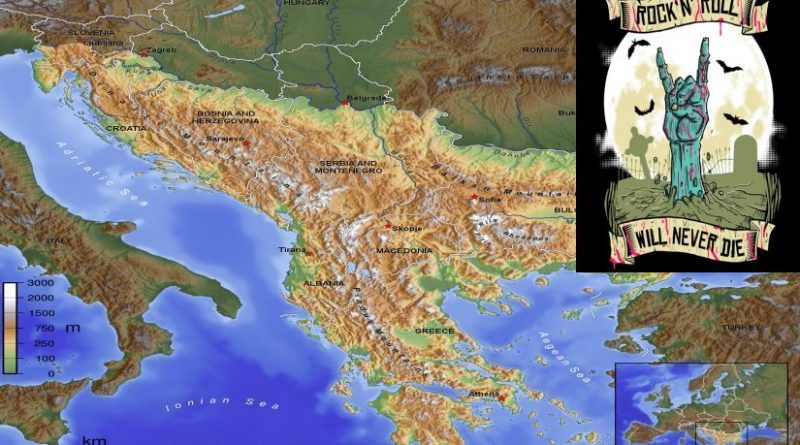 When talking about the year just ahead of us, 2016, we cannot do so without focusing on a good old story of “unfinished” business. Namely, the beauty of ignorance within the area of South-East Europe is so obvious that is inspirable to talk about – especially when talking about History as magistra vitae. Here, however, History is just the opposite – a magistra of death. And yet, about the past it is best to talk about it. It’s almost as if, because my past, and our past was so devastated, that we must to continue to devastate the past of others and those who are different from us, as they continuously are saying, while not thinking at all that here the “other and different” is so close (culturally, historically, socially, genetically…) to me and us. But this will not stop me and us to hate him or her because to avoid doing so only reminds me of who I really am.

Europe is sinking because of a rise of chauvinism and nationalism. The world is on the edge of thoughts and exclusion, through the mouthes of creatures such as Donald Trump, who are full of hatred towards the “others and different ones,” starting with immigrants from Latin America and continuing towards Muslims. Who knows, maybe within Trump’s blood (which is red, by the way, the same color as the blood of “others and different ones”) there are some blood cells of his (there is confirmed info that war criminal Adolf Hitler had some Jewish blood as well, as was written within the Telegraph back in 2010) that are the same as from the people he is now attacking, from Latin America to Middle East.

Why, is this happening now in this era of the new media revolution and a radical shift — changing everything we are supposed to think to help people, in general, to shift towards a better understanding of each other — and where there is no lack of information about “other and different ones”?  That’s because there is a Catch 22 within the digital world of new reality: Absurdum is anarchy within Internet and, of course, that the more suitable and sophisticated approach to propaganda is a reflection on the human mind is more radical than “ordinary” people like us. Why is this? Because global world controllers, regardless of whether we think that they exist or not (my quote: “Theory of conspiracy does not exists, but it works!”) does not need a world of peace. Again, why? If we had peace, then what would happen with enormous production of weapons and ammunition? What would happen with all the humanitarian aid organizations? What would happen with all the so-called NGO’s, fighters for human rights and survival of human kind all around the world? After all, what would happen to each and every state in the World if peace become GOOD FOR ALL AND NOW.

It is a utopia for the now and for good. Why? The answer is simple: Real believers in world peace are not going to churches, mosques and parliamentary assembles around the world. Real believers act not through any kind of world aid of NGO organizations. Real believers act through their personal stands, opinion and behavior reflected within the strong attitude that whoever kills one person, kill the entire world.

But, again, is the answer a continuum of the never admitted anarchy that is reflected in the never-ending story of World wars, which started in the beginning of last century and continue into the beginning of this one as well? Is there an answer in depopulation through the planned activities of local wars and airplanes for spraying?

Nevertheless, recent developments in the area of South-East Europe show that something is again (sic!) happening behind the screen and developing into  a new disaster:

1. In Croatia, there was the inauguration of a new president on 15.2.2015 (Ms. Kolinda Grabar-Kitarović from the nationalist right center party HDZ) and after recent Parliamentary elections (8.11.2015) where the mentioned party is back in power together with another so called THE BRIDGE of independent lists (nobody knows who are they, but if they have coalition with HDZ, it stinks of being a “right” one).

2. In Serbia, there was the inauguration of new president since 31.5.2012 (Mr. Tomislav Nikolić) from the nationalist right-center party SNS and after recent Parliamentary elections back in May 2012.

3. In Bosnia and Herzegovina from the Republic of Srpska and Milorad Dodik (Serb), who as the president who does not respect at all, as president of one entity, the state of BiH as the whole country up to Dragan Čović (Croat) who, together with Bosniak-Muslim member of presidency of BiH creates fairy tale of one and joint opinion on everything, but…all of them are nationalists (two out of three of them even former communists).

Why I have stated the situation within three former Yugoslavian republics? Because the mouth of the leaders are full of European integration (Croatia is even member of EU) and mutual understandings, but in real-time all of them are heavily loaded with hatred against the “other and different ones” under the table. So, what we can expect within the next 3-4 years for the Balkans? Just to remind you, after the so-called democratic elections in former Yugoslavian republics back in 1990 and end of Yugoslavia, it took only – not almost two years – to have bloodiest war ever in Europe after World War II which lasted, with few interruptions until 1999. Somebody said it never stopped. Leaders of the people just took a break/intermezzo.

At the same time, with the growing up of the nationalistic parties in Federation part of BiH (recent coalition of Muslim SDA party and Muslim SBB party on Federal level) some chauvinistic and terroristic acts have happened recently, from the killing of two soldiers in the Sarajevo suburban area on 19.11.2015 and more recently, on 22.12.2015, the arrest of 11 suspected Islamist terrorists in Sarajevo again, who were, apparently planning to kill at least 100 hundred people in a bomb blast during New Year Eve 2016 in Sarajevo. Amazing, how those terrorists start to expose rapidly themselves during the returning back in power of right wing parties. Is it a coincidence or not, we can only guess, until this country becomes to respect the Rule of Law, instead as it is nowadays which is the Law of Rule.

In Croatia, with entering to European Union, all different right wing parties became popular again (as it was in nineties of the last century) within the last couple of years and even some of them had fascistic sayings like what has been said recently by Ladislav Ilčić (established as “Croatian Donald Trump”), on 13.12.2015 and related to Muslims.…quote: “He stated that the refugees coming from Africa and Asia are “biologically stronger” than the Europeans and have many children. Ilčić himself admitted later in another interview that he has five children and shares many of the cultural views of Muslims. He said, however, that although children are equally valuable, they are different”..end of quote. Amazing, isn’t it.

Why, again? Because, they are all ready to re-start the bloody war against the “other and different ones” just and only to stay in power within the area where more than 50 % of people are unemployed. Is that enough? Want more? OK, they are willing even to agree to kill some of their own and blame others. Want more? They will make coalition with even angry enemies, like late Muslim leader of BiH, Alija Izetbegović which has made with right wing Serbian party SDS after the war just to avoid to have “communists” as SDP (it is surprising that they: SDP – have connection with communists as I do with nationalists) back on power in 1996, after the war in BiH.

So, Very Happy New 2016 Year to the area of South East Europe quoting my 29 year old son who answered my question on 26.12.2015: “Where do you see Bosnia and Herzegovina ten years from now? (it is the same for Croatia and Serbia as well)…the following: “Behind my back.”

Painfully, but truthfully, really. That is why the rock’n’roll… of stupidity…will never die. Especially within Balkans.