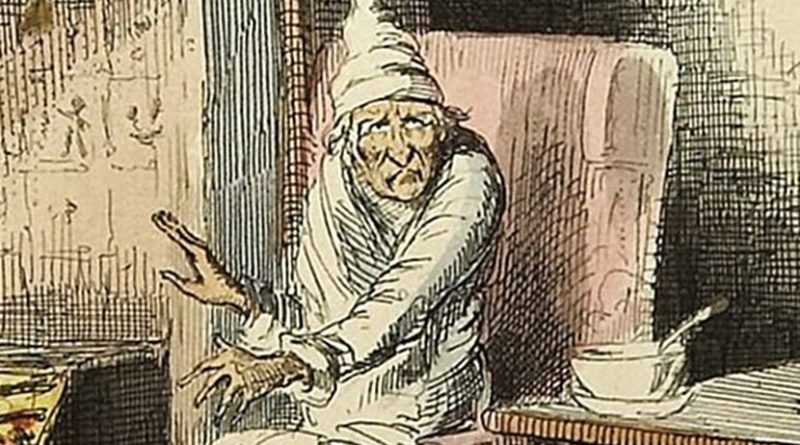 Scrooge, from Charles Dickens: A Christmas Carol. In Prose. Being a Ghost Story of Christmas. With Illustrations by John Leech. London: Chapman & Hall, 1843. First edition.

If you answered yes to both of these questions, you have a fairly typical executive mindset, according to research by IESE Sebastian Hafenbrädl and David Waeger of Wilfred Laurier University. And these findings have implications on the take-up, or lack of take-up, of CSR initiatives.

Academics and activists have long thought that if executives can be convinced that CSR is beneficial — not just socially but also to a company’s bottom line — that they will be quick to embrace and invest in such activities.

It’s hard to conclusively prove the relationship between social good and economic profit, but, as the research shows, executives do generally believe there is a business case for CSR. So why don’t we live in a more social-minded world? Hafenbrädl’s research into the intersection between psychology and economics examines the force — system justification — that neutralizes the effect of the belief in the business case.

Is our Economic System Fair?

CSR, the authors argue, is often less about logic and economics than it is about worldview and ideology. In a series of tests, they examined executives’ and students’ beliefs re: the modern economic system, and measured them against their understanding of the business case for CSR, and also against CSR decisions.

Studies show that most of us justify and idealize the system, or social arrangements, under which we live, at least to some degree. Those who view the market economic system as more inevitable or inescapable can be categorized as believing in “fair market ideology” — i.e., seeing the market economic system as fair, legitimate and justified. The authors link educational background to fair market ideology. Specifically, they find that educational backgrounds in business, economics and law — common backgrounds among high level executives — are more likely to have more exposure to the market system, less exposure to alternatives, and be more likely to believe in fair market ideology.

The research findings hinged on this point are intriguing. Since the current business environment has companies striving for economic benefits, and, at the same time, producing many CSR initiatives, those who believe in the general fairness of the current system also tend to believe that CSR makes economic sense — and yet they aren’t any more likely to engage in meaningful CSR initiatives themselves.

The key to this is found in the psychological justification of the current system which, ultimately, is motivated by a desire for stability. You see, justifying the status quo has also been shown to reduce the use of both morals and emotions in dealing with business decisions. Both guilt and moral outrage were shown to take a hit in individuals with high system justification. Moral outrage, in particular, is key to initiatives to help the more disadvantaged.

“It is thus not so much their difficulty believing in the business case, but rather their lack of moral emotions that prevents executives with an instrumental view from investing in CSR,” the authors conclude.

So where does that leave CSR? Possibly in need of a new marketing campaign.