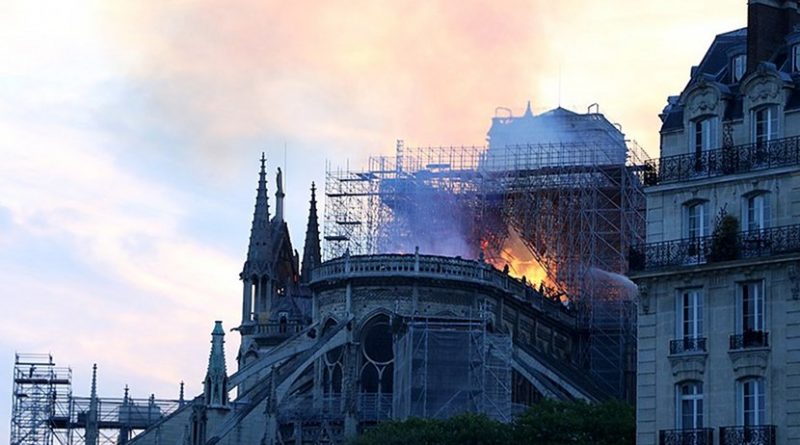 This year Christmas Mass was not celebrated at Notre-Dame de Paris for the first time since the French First Republic, and the cathedral’s rector says that there is a significant chance the building cannot be rebuilt safely.

The church “is not out of danger,” Monsignor Patrick Chauvet said to the Associated Press Dec. 24. “It will be out of danger when we take out the remaining scaffolding.”

The scaffolding, which was present on the building prior to the April 15 fire due to restoration work, fused together during the blaze. There are an estimated 551 tons of metal still present on top of the cathedral.

“Today we can say that there is maybe a 50% chance (the cathedral) will be saved,” said Chauvet. “There is also (a) 50% chance of scaffolding falling onto the three vaults, so as you can see, the building is still very fragile,” he added.

The last time Christmas Mass was not celebrated at Notre-Dame was in 1803, the final Christmas under the French First Republic. In 1793, amid the French Revolution which established the republic, the cathedral was “re-dedicated” to the “Cult of Reason,” a state-created religion that was intended to replace Catholicism. It was returned to the Church in the early 19th century.

Chauvet said that once the scaffolding is removed, the restoration work will begin. He does not think that this will happen until 2021 at the earliest.

After the reconstruction begins, it will take about three years before the cathedral can be open to the public, Chauvet said. Although French President Emmanuel Macron vowed in the days after the fire that the cathedral would be rebuilt in time for the 2024 Summer Olympics, which will be hosted in Paris, this appears unlikely.

When the fire began, it was feared that the entire building could be lost. After 12 hours of firefighting, only the roof and spire were lost, and the majority of the stone vaults held. The vast majority of the treasures and relics that were stored in the cathedral, including the Crown of Thorns, were removed from church and were undamaged.

In addition to the structural damage caused by the fire, the flames also released a large amount of toxic lead dust due to the collapse of the spire. Levels of lead concentration in and around the cathedral are approximately 500 to 800 times the threshold for acceptable exposure levels.

Since the blaze, one Mass has been celebrated in the cathedral. On June 16, the anniversary of the dedication of the cathedral’s altar, a small Mass was celebrated in one of the side chapels that had not been damaged by the fire. All who attended had to wear protective hard hats during the Mass.

It is still undetermined what caused the fire. Authorities suggest it could have been either a cigarette or an electrical malfunction.

One thought on “Notre-Dame Still At Risk Of Destruction, Says Rector”