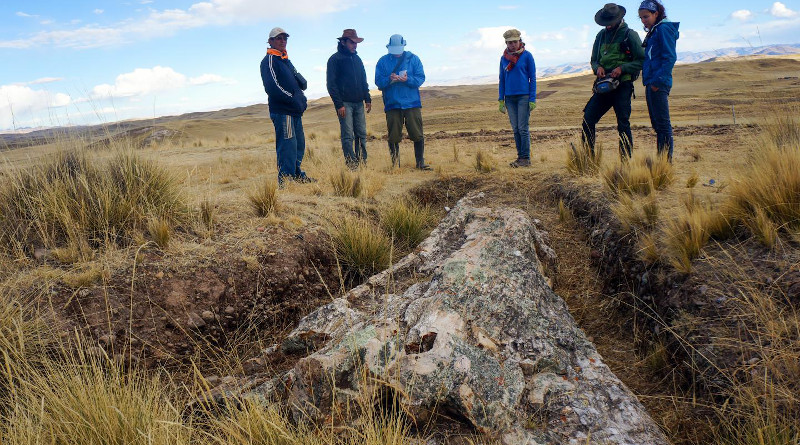 On an expedition to the Central Andean Plateau, researchers from the Smithsonian Tropical Research Institute (STRI) and colleagues were astounded to find a huge fossil-tree buried in the cold, grassy plain. The plant fossil record from this high-altitude site in southern Peru contains dramatic reminders that the environment in the Andes mountains changed drastically during the past 10 million years, but not in the ways that climate models of the past suggest. Findings from the expedition are presented in the journal Science Advances.

“This tree and the hundreds of fossil wood, leaf and pollen samples we collected on the expedition, reveal that when these plants were alive the ecosystem was more humid–even more humid than climate models of the past predicted,” said Camila Martinez, a fellow at STRI, who recently finished her doctorate at Cornell University. “There is probably no comparable modern ecosystem, because temperatures were higher when these fossils were deposited 10 million years ago.”

The anatomy of the petrified (permineralized) wood the researchers found is very much like wood anatomy in low-elevation tropical forests today. Indeed, the altitude then was probably only 2,000 meters above sea level.

But that ecosystem did not last for long. Today, the arid, intermountain plateau lies at 4,000 meters above sea level.

Five million year-old fossils from the same sites confirmed that the Puna ecosystem that now dominates the Andes’ high mountain plateaus had been born: the younger pollen samples were mostly from grasses and herbs, rather than from trees. Leaf material was from ferns, herbs and shrubs, indicating that the plateau had already risen to its current altitude.

“The fossil record in the region tells us two things: both the altitude and the vegetation changed dramatically over a relatively short period of time, supporting a hypothesis that suggests the tectonic uplift of this region occurred in rapid pulses,” said Carlos Jaramillo, STRI staff scientist and project leader.

“Andean uplift played an important role in shaping the climate of South America, but the relationship between the rise of the Andes, local climates and vegetation is still not well understood,” Martinez said. “By the end of this century, changes in temperature and atmospheric carbon dioxide concentrations will again approximate the conditions 10 million years ago. Understanding the discrepancies between climate models and data based on the fossil record help us to elucidate the driving forces controlling the current climate of the Altiplano, and, ultimately, the climate across the South American continent.