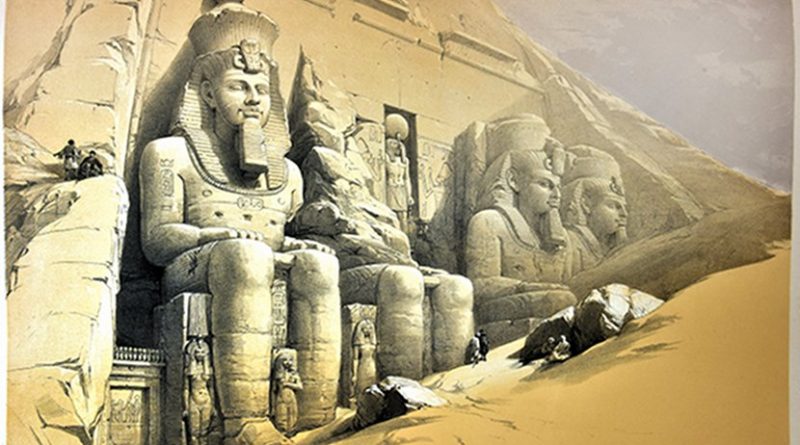 The rediscovery of Ancient Egyptian monuments, temples and tombs during the 19th century by pioneering adventurers will be charted as part of a new exhibition running at the University of Leicester until 12 November.

Titled ‘Buried beneath the sands: Unearthing Ancient Egypt’, the exhibition is brought to life through a number of beautiful contemporary images which showcase the majesty of the Pyramids of Giza, the Great Temple at Abu Simbel and a number of other iconic structures – some of the most exceptionally preserved monuments in history.

The exhibition celebrates the achievements of Egyptologist and adventurer Giovanni Belzoni, who was the first to set foot inside Abu Simbel, which had been sealed for centuries beneath the sands of the desert.

Belzoni’s exploits in Egypt have aroused strong feelings among some archaeologists – he used a battering ram to open sealed doorways in the Valley of the King and he carved his name (together with those of his companions) on the north wall of the temple sanctuary at Abu Simbel.

Belzoni’s first sight of Abu Simbel in August 1816 illustrates the scale to which he was working. He wrote: “On approaching this temple, the hope I had formed of opening its entrance vanished at once, for the amazing accumulation of sand was such that it appeared an impossibility ever to reach the door. I calculated that the doorway could not be less than thirty-five feet below the surface of the sand, and to attempt to make an aperture straight through it to the door would have been like making a hole in the water.”

He found the colossal statues at the entrance to the temple “almost entirely buried beneath the sands. The entire head and part of the breast and arms of one of the statues are yet above the surface; the head of the next is broken off, and the bonnets of the other two only appear’.”

As well as the opening of the Great Temple at Abu Simbel, he was responsible for the discovery of the tomb of Seti I in the Valley of the Kings, major finds at the Colossi of Memnon and Karnak, the discovery of the entrance to the Pyramid of Khephren at Giza and the removal of a colossal bust of Ramses II (now in the British Museum) from the Ramesseum.

Belzoni documented his discovery of Seti I’s tomb with sketches and over 300 detailed watercolour studies, something that few would have thought to do at that time.

Although many of the paintings were by his assistant Alessandro Ricci, some were by Belzoni himself. His Narrative of the Operations and Recent Discoveries, first published in late 1820, contained 44 plates of watercolour drawings, again some by Ricci but others by Belzoni himself. He was an accomplished artist – yet another facet of this multi-talented man.

Margaret Maclean, formerly of the University of Leicester’s Special Collections, who organised the exhibition, said, “Belzoni had great physical strength, determination and resourcefulness, a combination which enabled him to work in the searing heat of Egypt and demanding conditions in the field at that time. Somehow or other, he also managed to persuade the local people to cooperate and work for him; this helped him to succeed, where others had failed – in moving the statue of Ramses II, for example.

“During his time in Egypt, his background in engineering meant that he evolved more effective techniques of excavation and he absorbed much knowledge of the subject. Above all, he had an uncanny instinct for knowing where to look.

“Judged by the standards of his day, rather than by comparison with modern methods, Belzoni’s achievements in Egypt were extraordinary.”

The exhibition has four cases, which cover ‘The Pyramids of Giza’, ‘On the Nile’ (which concentrates largely on Philae), ‘A Mysterious Script and a Circus Strongman’ (which discusses the decipherment of hieroglyphs and Belzoni’s exploits) and ‘The Delights of the Country: Early Travellers’ Impressions’.

The exhibition, ‘Buried beneath the sands: Unearthing Ancient Egypt’, will run at the University of Leicester’s Special Collections in the David Wilson Library basement until 12 November.