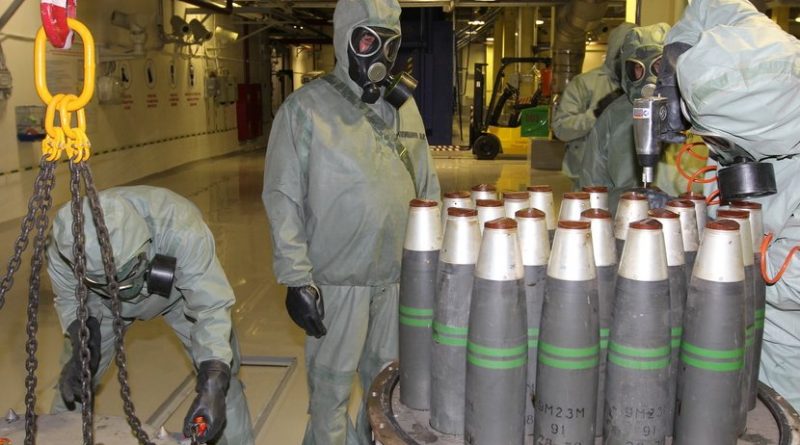 Chemical weapons elimination at the Kizner facility in Russia, 2017. Photo: Federal Department on safe storage and elimination of chemical weapons under the Ministry of Industry and Trade of the Russian Federation, http://www.химразоружение.рф/

On Wednesday the Director-General of the Organisation for the Prohibition of Chemical Weapons (OPCW), Ambassador Ahmet Üzümcü of Turkey, congratulated Russia on completing the destruction of its chemical weapons stockpile which originally totalled 39 967 agent tonnes (i.e. excluding munition weight). This represents a major milestone towards realizing a world without chemical weapons as envisaged by the negotiators of the 1993 Chemical Weapons Convention (CWC).

The experience gained from a 1989 Memorandum of Understanding and a 1990 Bilateral Destruction Agreement concluded between the Soviet Union and the United States partly informs the procedures by which possessor states declare their chemical weapons to the OPCW and how the OPCW verifies their destruction. Over the years Russia and the USA have consulted each other on the development of common understandings on the selection and optimization of chemical weapons destruction technologies, including within the framework of the 1992 Nunn–Lugar Cooperative Threat Reduction  Program and the Global Partnership Against the Spread of Weapons and Materials of Mass Destruction. Other states (such as Germany) and civil society (such as Green Cross Russia and Global Green USA) have played important roles in such efforts, including by supporting risk assessment and public outreach at Russia’s seven chemical weapons storage facilities.

As a rule, the completion of destruction operations is marked by a closing ceremony with the OPCW Director-General (or other designated representative) in attendance. However, such a ceremony was deemed infeasible in this case (for unclear reasons) and Ambassador Üzümcü issued his statement at the OPCW headquarters in The Hague, the Netherlands.

The USA, the other major possessor of a chemical weapons stockpile (which originally totalled approximately 30 000 agent tonnes), has completed the destruction of approximately 90 percent of its stockpile and is scheduled to finish its operations by 2023. Old chemical weapons (in the low hundreds of tonnes) will continue to be recovered and destroyed under OPCW verification for some years. Most recoveries originate from former World War I battlefields in Europe or sites in China where chemical weapons were abandoned by Japan at the end of World War II.

The CWC regime is entering a ‘post-chemical weapons destruction’ phase. At least two visions may be realized: the first in which the OPCW is focused on chemical weapons threats with most resources allocated accordingly, the second in which the OPCW serves as a model of international outreach and capacity building for the peaceful uses of chemistry. This transition will occur under the guidance of a new Director-General, starting next year.

The CWC regime remains a platform for the member states to cooperate on technical matters. It is imperative for the OPCW to retain its capacity to help to ensure that the threat of chemical warfare does not re-emerge over the indefinite future.

About the author:
* Dr John Hart is Head of the Chemical and Biological Security Project.

Source:
This article was published at SIPRI.