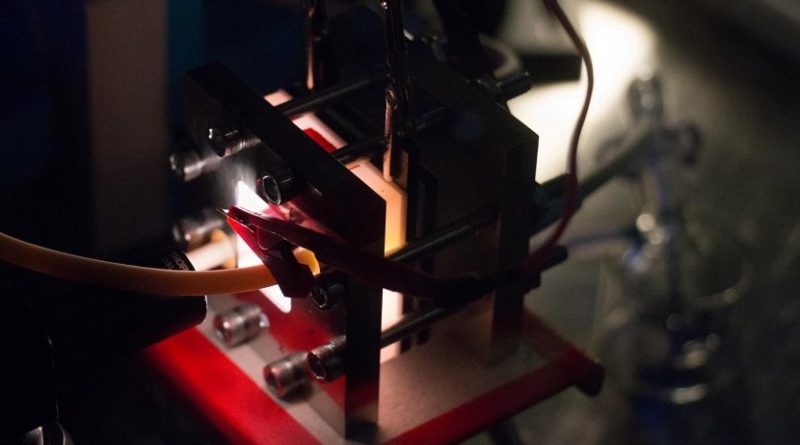 Scientists in the United States and Saudi Arabia have harnessed the abilities of both a solar cell and a battery in one device–a “solar flow battery” that soaks up sunlight and efficiently stores it as chemical energy for later on-demand use. Their research, published September 27 in the journal Chem, could make electricity more accessible in remote regions of the world.

While sunlight has increasingly gained appeal as a clean and abundant energy source, it has one obvious limitation–there is only so much sunlight per day, and some days are a lot sunnier than others. In order to keep solar energy practical, this means that after sunlight is converted to electrical energy, it must be stored. Normally this takes two devices–a solar cell and a battery–but the solar flow battery is designed to perform like both.

“Compared with separated solar energy conversion and electrochemical energy storage devices, combining the functions of separated devices into a single, integrated device could be a more efficient, scalable, compact, and cost-effective approach to utilizing solar energy,” says Song Jin, a professor of chemistry at the University of Wisconsin-Madison. Jin and his team developed the device in collaboration with Jr-Hau He, a professor of electrical engineering at King Abdullah University of Science and Technology (KAUST) in Saudi Arabia.

The solar flow battery has three different modes. If energy is needed right away, it can act like a solar cell and immediately convert sunlight to electricity. Otherwise, the device can soak up solar energy by day and store it as chemical energy to deliver it later as electricity when night falls or the sky grows cloudy. The device can also be charged by electrical energy if needed, just like a typical battery. The team’s most recent solar flow battery model is able to store and deliver electricity from solar energy more efficiently than any other integrated device currently in existence.

Jin believes the solar flow battery could help transcend the limitations of the electrical grid by making electricity more readily available to people living in rural areas and providing an alternative source of energy when traditional electrical systems fail.

Manufacturing current solar flow batteries is still too expensive for real-world markets, but Jin believes simpler designs, cheaper solar cell materials, and technological advances could help cut costs in the future. And while the current model is comparatively quite efficient, the team has plans to further improve its design. Some of the current device’s voltage is still going to waste–meaning the scientists may need to tweak the redox species and photoelectrode materials that work in tandem to convert solar energy input into electrical output. But Jin believes that, with further research, solar flow batteries may soon be practical.

“We believe we could eventually get to 25% efficiency using emerging solar materials and new electrochemistry,” says Jin. “At this efficiency range, without using the expensive solar cells, it should be quite competitive with other renewable energy technologies. Then I think commercialization could be possible.”