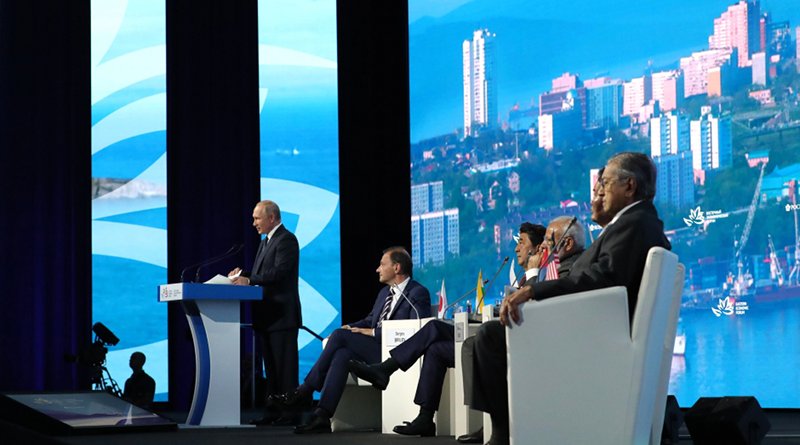 Russia’s pivot to the East is assuming a more balanced tilt and might become more sustainable.

Russia’s pivot to the East, hitherto focussed on China and the Asia-Pacific region, has shifted − the high-profile attendance of Indian Prime Minister Narendra Modi at the 5th Eastern Economic Forum (EEF) in Vladivostok from 4-6 September 2019 was its  manifestation. The event was also attended by Japanese Prime Minister Shinzo Abe, Malaysian Prime Minister Mahathir Mohamad and Mongolian President Khaltmaagiin Battulga.

Singapore’s Senior Minister and Coordinating Minister for Social Policies Tharman Shanmugaratnam also attended the event, in conjunction with his visit to Russia to co-chair the High-level Intergovernmental Commission (IGC), an annual dialogue to strengthen broad-based cooperation between the two countries. China, North Korea, South Korea, and Indonesia participated in the EEF as well.

Russia’s Objectives at the 5th EEF

Russia may have achieved three goals by convening the 5th EEF:

Firstly, it acted as a signal to China and to the rest of the Asia-Pacific that Russia is actively seeking to balance its strong ties with Beijing by building links with India and Japan, and the ASEAN countries. In that regard, it was also meant to bolster Russia’s oft-declared intention to strengthen its links with the Asia-Pacific region.

Secondly, it served to again underline that perceived Western attempts to isolate Russia have failed.

Finally, it was used as a platform, for domestic political reasons, to reemphasise President Vladimir Putin’s and the federal government’s oft-repeated declarations that the socio-economic development of the Russian Far East (RFE) remains a crucial goal for the government and that both domestic and foreign investments are needed and would be attracted to attain it.

India as Focus of Russia’s Pivot

Prime Minister Modi was the Chief Guest of the event; his visit to Vladivostok took place in connection with the 20th India-Russia Annual Summit. Both sides pledged to raise bilateral trade to US$30 billion by 2025, from the current US$11 billion.

(Bilateral investments total over $30 billion, with Russian investments amounting to $18 billion while India’s total investment in Russia reaching $13 billion; the investment target is $50 billion by 2025, set during the 19th Annual Summit in October 2018).

The signing of a Roadmap for Cooperation in Hydrocarbons for 2019-2024 is an important step to strengthen bilateral links in the energy sector. India is already one of the major foreign investors in the RFE energy sector.

The highlight of PM Modi’s visit was his announcement that India would extend a $1 billion line of credit to Moscow for the RFE’s development; this was the first time India had undertaken such a step.

That only bodes well for Russo-Indian relations which are also underpinned by the fact that India is a major purchaser of Russian weapons (its latest purchase being the S-400 advanced missile defence system worth $5 billion). Moreover, India is important to Russia, given the balancing role it plays for Moscow with respect to Russia’s relations with China and the US.

While no breakthrough in Russo-Japanese relations was expected at the EEF, PM Abe’s attendance for the fourth time in a row testifies to President Putin’s success in retaining the interest of the Japanese leader to strengthen links (the contentious issue remains the lack of movement on the Kurile Islands).

Business was therefore on the minds of the Japanese delegation, the largest at the event. One of the largest deals was an agreement between Novatek and Mitsui & Co. and Japan Oil, Gas and Metals National Corporation on the Arctic LNG 2 project. Japan has been a long-standing major investor in the RFE’s energy sector.

President Putin used the event’s platform to express his stance on President Trump’s suggestion that Russia should return to the G-7 Club of Western nations. Russia was suspended from the G-8 in 2014 after its annexation of the Crimea; President Trump suggested the return of Russia at the G-7 summit in France.

PM Abe was reported to have said at the event that he supported Russia’s return to this Club. This is not only a foreign policy triumph for President Putin but more significantly, his expressed readiness to host a G-8 summit with China, India and Turkey is a reaffirmation of Russia’s entrenched Euro-US orientation.

The suggestion to include the other three countries was made in the knowledge that the G-7 is unlikely to agree to do so. However, it does open the door to the possibility that Russia would be able to return to the ranks of the developed world.

Prime Minister Mahathir had recently expressed doubts about some of the findings of the Netherlands-led Joint Investigative Team on the downing of MH-17 over Ukraine. This could be seen as a measure of success in the foreign policy arena for Russia.

(The JIT had concluded that the Malaysian airliner had been shot down by a missile fired by pro-Russian separatists in 2014. Russia has consistently denied any involvement in the incident).

On the bilateral side, Russia’s agreement to share its expertise in engineering, naval and aerospace technology and proposal to set-up an aerospace university in Malaysia, if realised, would pave the way for an increased Russian commercial presence and activities in Malaysia.

According to the organisers, the 5th EEF resulted in 270 agreements worth RUB3.4 trillion with over 8,500 delegates from 65 countries. The most significant agreements listed on the organisers’ website show that the majority of them were domestic in origin.

While President Putin highlighted the fact that the RFE had received more than $9 billion investments since 2015, thanks to government support measures, foreign investments into the region have apparently not met earlier hopes and expectations.

In a recent article, a Russian academic expert from Vladivostok’s leading university opined that investors from China and other Asian countries “mostly keep their distance from the RFE”. One reason cited is Russia’s current state of relations with the US and Western countries which “is scaring many potential foreign investors”.

Russia’s ongoing engagement with the Asia-Pacific region and ASEAN deserves watching. As long as its attention on these regions does not lose momentum and its entrenched Euro-US-centric orientation does not take the lion’s share of its overall focus, ASEAN stands to benefit.

Moreover, the ASEAN-Eurasian Economic Commission signed an MOU in November 2018 after the ASEAN-Russia Summit to boost trade. This would strengthen economic links between Russia and ASEAN.

Malaysia’s strengthening of its relations with Russia would help ASEAN and Russia as a whole to raise their relationship to a higher level. Such a relationship with Russia, especially in the economic sphere, would give ASEAN a little more room to manoeuvre in the increasingly ineluctable rivalry between the US and China in the region.

*Chris Cheang is a Senior Fellow with the S. Rajaratnam School of International Studies (RSIS), Nanyang Technological University (NTU), Singapore. He had served as a Singapore diplomat in Germany, Russia and the United States.

Home » Russia’s Pivot To The East: A New Balance? – Analysis