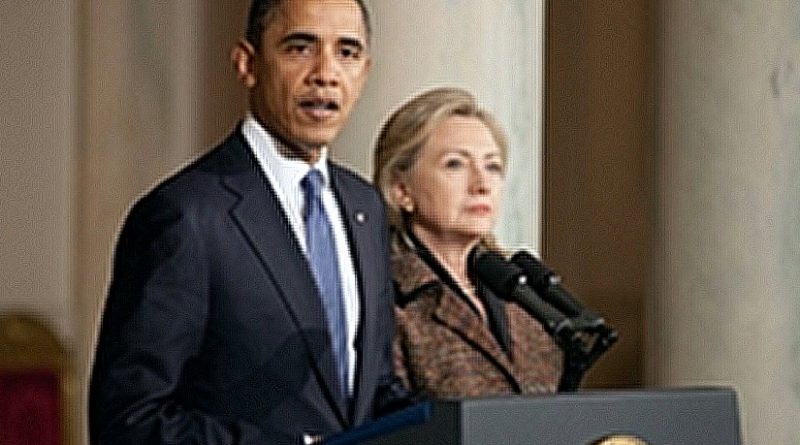 US President Barack Obama will be a lame duck next year and the officials in his administration, especially his Secretary of State Hillary Clinton, are hilariously doing their best to make sure that they haven’t spared any effort to intervene in the internal affairs of other countries and sabotage the stability and security of those whom they call “enemies,” like Iran.

On October 27, Hillary Clinton gave an exclusive interview to the UK’s state-funded, state-run BBC Persian TV and in an attempt aimed at reaching out to the Iranian nation, made bombastic remarks which have certainly infuriated the Iranian nation and demonstrated that the hostile behavior and antagonistic stance of the US government toward the Iranian nation is a manifestation of the idiom “the leopard can’t change its spots.”

At the beginning of the interview, Clinton referred to the sanctions imposed against Iran by the US and its European allies and said that these sanctions are targeted at forcing the Iranian government into abandoning its nuclear program which she called is an effort to construct nuclear weapons and not for civilian purposes. Forgetting the detrimental impacts of economic sanctions against the ordinary people, Clinton talked of the United States as a friend of the Iranian people, stressing that she wanted to reaffirm her country’s “very strong support for and friendship toward the people of Iran.” She further added that the behavior of the United States towards the Iranian government is different from its behavior toward the Iranian people, and by saying that, she clearly paraded her diplomatic naiveté and artlessness. How do you justify enmity with a government which is democratically elected by a group of people which you claim of being supportive of?

Secondly, maybe Mrs. Secretary has forgotten that the US itself is the largest possessor of nuclear weapons in the world. How can such a police state which has so far killed millions of people around the world, from Nagasaki and Hiroshima to Baghdad and Kabul, boast of its concerns about the development of nuclear bombs by a country which is the most pacifist country in a boiling and tumultuous region such as the Middle East and hasn’t ever invaded nor attacked any country in the past century?

A Reuters report quoting US officials revealed in May 2010 that the US has an arsenal of 5,113 nuclear warheads. It is the only country which has used nuclear weapons in the warfare and the only nation that has conducted around 1,054 nuclear tests and developed many long-range weapon delivery systems. So, who is really entitled to be concerned? Shouldn’t the international community be anxious about the nuclear arsenal of the self-proclaimed superpower, the US? Who may guarantee that the US won’t use its nuclear weapons in the prospective wars which it will be waging in the future? If the criterion of imposing financial sanctions is the possession of nuclear weapons and pursuing the development of them, why shouldn’t the US or its Middle East client state, Israel, which is the sole possessor of nuclear weapons in the Middle East, be the target of sanctions? A report by Federal Reserve Bank of Minneapolis showed that between 1940 and 1996, the US spent at least USD 8.15 trillion in present day terms on nuclear weapons development. Which country can be pinpointed on the world map which has invested in nuclear program, even for peaceful purposes, so enormously?

But it was not only Clinton’s deceptive bluffs on Iran’s nuclear program that seemed perplexing and ridiculous. She lived beyond her means by claiming that the international community is angry at what Iran is today and wants a better future for its people!

“But I would ask you to put yourself in the position of the international community and those who seek a better future inside Iran. If you do not want to have a conflict, if you do not want to just give way to behavior that is very reckless, as we saw in this recent plot against the Saudi ambassador, potentially dangerous, sanctions is the tool that we have at our disposal to use,” she said.

Clinton went on to raise the issue of the alleged terror plot against the Saudi ambassador in Washington and attributed this plot to Iran. She, however, certainly remembers that they were the agents of CIA, MI6 and Mossad in Iran that assassinated four Iranian nuclear scientists immediately after their name was put on the UNSC sanctions list. Wasn’t the assassination of Dariush Rezaei, Massoud Alimohammadi or the foiled assassination plot against Fereydoon Abbasi a conspicuous sponsorship of terrorism by a government which calls itself the number one defender of democracy and peace? Wasn’t awarding the 2009 Nobel Peace Prize to the President of such a country which murders and kills people with impunity some kind of degrading and humiliating this prestigious award?

But an interesting juncture in Clinton’s interview with BBC was where a recorded video containing a question by one of the viewers of BBC was aired. The viewer asked Hillary Clinton about America’s perpetual adherence to double standards, its support for repressive regimes such as Saudi Arabia and Bahrain, its backing of the dreadful coup d’état against the democratic government of Iran’s then Prime Minister Mohammad Mosaddegh in 1953 and its heinous shooting down of the Iran Air Flight 655 on July 3, 1988 which claimed the lives of 290 innocent passengers including 254 Iranians. Clinton was apparently taken aback by the question as her awkward response showed that the US government has never found any way to account for its hypocritical policies and actions, “We have consistently spoken out about Bahrain and we have pushed the government to do more, and we support the independent investigation… We know that everything we have done in the course of our 235-plus year history is going to appeal to or be supported by everyone, and we take our history seriously. So, for example, we’ve expressed regret about what was done in 1953… And then we also have tried to point out that the tragedy of the shooting down of the airline is something that we deeply are sorry for, and we have said that repeatedly.”

Of course Hilary Clinton’s interview with BBC Persian was a fiasco and a political debacle. She just showed her lack of political finesse and once again brought to mind that the wolf may lose his teeth, but never his nature. Clinton is the representative of a country which throughout the history has repeatedly betrayed the Iranian nation. Perhaps expressing deepest apologies to the Iranian nation and changing their hostile attitude can be the first step which the American politicians should take in order to have the bitter memories of their mischievousness wiped off the minds of Iranian people.

Kourosh Ziabari is an award-winning Iranian journalist, writer and media correspondent. He represents Fair Observer and Your Middle East in Iran. He also conducts interviews and writes commentaries for the Iran Review news and analysis website as a staff writer and reporter. His articles and interviews have been published on Tehran Times, Press TV, International Policy Digest, Foreign Policy Journal, Global Research, Turkish Weekly Journal, Strategic Culture Foundation, Al-Arabiya, Counterpunch, Voltaire Network, Baltimore Chronicle and Opinion Maker. He currently blogs for The Huffington Post and writes op-eds for the UK-based Middle East Eye. In 2009, while an undergraduate student of English Language and Literature, he was selected to represent the Middle East students in the International Student Energy Summit 2009 in Calgary, Canada. Kourosh Ziabari is working with Gateway House: Indian Council on Global Relations as an Iran analyst. He has conducted interviews with some 380 prominent world leaders, politicians, diplomats, UN officials, academicians, public intellectuals, authors, media personalities, journalists and historians. Kourosh Ziabari is the winner of the silver medal at the National Festival of Superior Iranian Youth. He has won three awards in Iran's National Press Festival and also been a member of the European Association for the Teaching of Academic Writing. He was a member of Stony Brook Independent magazine's editorial board and a member of the Kenya-based World Student Community for Sustainable Development. In June 2015, he received a fellowship from Deutsche Welle / European Youth Press to attend and cover the Global Media Forum 2015 in the German city of Bonn. In August 2015, he was named by the Hawaii-based East-West Center as a Senior Journalists Seminar Fellow 2015 to travel to the United States, Malaysia and Pakistan for a reporting and dialog tour aimed at bridging the gaps in the relations between the United States and the Muslim world. He is also a recipient of the Gabriel Garcia Marquez Fellowship in Cultural Journalism awarded to him in November 2015 by the FNPI foundation in Colombia.

One thought on “When Hillary Clinton Doesn’t Make Sense – OpEd”