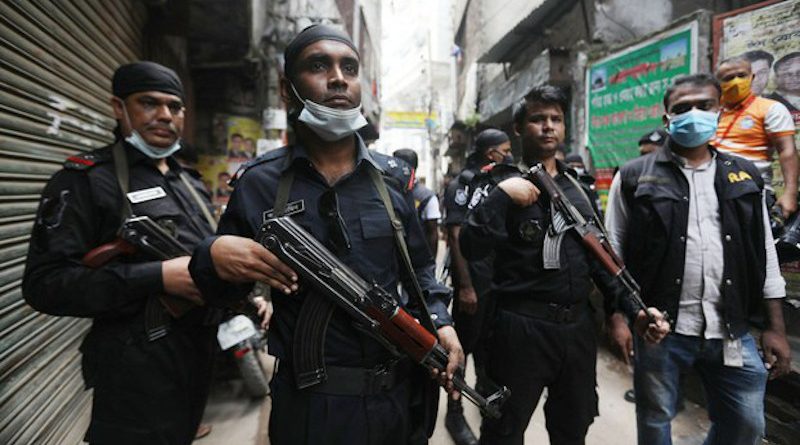 Rapid Action Battalion (RAB) personnel gather in a Dhaka street before raiding a home to arrest a suspect, Oct. 26, 2020. [BenarNews]

A bipartisan group of U.S. senators is urging the Trump administration to impose sanctions on senior commanders of an elite Bangladeshi police unit for their alleged complicity in hundreds of “extrajudicial killings” as well as enforced disappearances and torture.

Ten senators, in a letter to the heads of the U.S. State and Treasury Departments on Tuesday, described the unit known as the Rapid Action Battalion as likely being part of a crackdown on dissent by the Awami League government, which has been in power since 2008.

This marks the first time American lawmakers have called for sanctions on leaders of the black-clad RAB commandos.

“Since 2015, the RAB has reportedly extrajudicially killed more than 400 people, and the RAB has been credibly implicated in many cases of enforced disappearances and torture. These violations appear to be part of a broader crackdown on dissent by the ruling Awami League, and the RAB has not been held to account,” the senators’ letter said.

“We urge you to impose targeted sanctions on senior RAB commanders responsible for these gross human rights violations under all applicable authorities, including the Global Magnitsky Human Rights Accountability Act and Section 7031(c) of the FY 2020 Further Consolidated Appropriations Act.”

The Magnitsky Act, signed in 2012 and expanded in 2016, authorizes the U.S. president to block or revoke visas and impose sanctions on the property of suspected human rights abusers around the world.

The Further Consolidated Appropriations Act, 2020 authorizes the provision of money to fund the operation of certain federal agencies.

“U.S. law requires action in the face of gross violations of human rights,” said the senators.

In Dhaka on Wednesday, a Bangladesh home ministry spokesman told BenarNews that no law enforcement agency had been involved in extrajudicial killings and that officers only fire their guns when attacked, allegedly by armed drug runners. The ministry oversees the police and RAB.

However, documentation from reliable human rights groups shows that victims were often in custody of RAB personnel when they were killed, said the letter by the senators from across party lines to U.S. Secretary of State Mike Pompeo and Secretary of the Treasury Steven Mnuchin.

The Rapid Action Battalion was formed in 2004 by then-Prime Minister Khaleda Zia to combat rising Islamic militancy in Bangladesh.

Alleged extrajudicial killings by RAB increased in late 2018 when the government launched a “war on drugs,” the senators said, citing a 2018 letter by United Nations Special Rapporteurs to Bangladesh’s government.

The U.N. representatives then urged the government to stop “what appears to be a deliberate policy of extrajudicial killings of drug traffickers and users.”

They also said some of these killings may have been carried out in the interests of the government.

On Wednesday, Sharif Mahmud Apu, a spokesman for the Ministry of Home Affairs, acknowledged that the administration had stepped up a crackdown on criminal activities and drug smugglers.

“The democratically elected Awami League government has intensified its drive against criminal activities and illegal narcotics smugglers across the country,” he told BenarNews.

When asked to comment on the letter by the U.S. senators, Foreign Minister F. M. Abdul Momen said that the government would look into their allegations, and added that the situation had to be investigated fairly.

“I have yet to see the letter of the U.S. senators. But the U.S. has always been concerned about the extrajudicial killings and human rights abuses. We will examine the allegations they have raised,” Momen told BenarNews.

“We have to see whether the allegations of extrajudicial killings are correct at all. One-sided allegations are not acceptable.”

In their letter, the U.S. senators expressed grave concern that the RAB “has not been held to account” and “continues to commit extrajudicial killings with impunity” even as it claims that such killings result from “gunfights” or “crossfire.”

The senators referred to a 2019 Amnesty International report “Killed in ‘Crossfire,’” which is about the allegations of extrajudicial killings in Bangladesh “in the guise of a war on drugs.”

Amnesty reported that many victims were often in RAB custody when they were killed, and many of their bodies showed signs of death by execution, rather than a “gunfight,” the senators wrote.

Amnesty said there was little evidence that independent, transparent and impartial investigations were conducted into suspected extrajudicial executions.

In October 2017, Leahy said that he had been corresponding with Bangladesh’s government for many years to express concerns about alleged extrajudicial executions “by the government of Prime Minister Sheikh Hasina Wajed and particularly by the Rapid Action Battalion, RAB.”

Leahy indicated he was rather unhappy with Dhaka’s responses.

“Like the inquiries and appeals of others, my concerns have been responded to by Bangladeshi officials with blanket denials, obfuscation, and even falsehoods,” Leahy told the Senate then.

Data from Ain-O-Salish Kendra (ASK), a human rights organization in Bangladesh which complies its information based on newspaper reports, shows that of a total of 1,619 deaths caused by law enforcement agencies from January 2015-September 2020, RAB has been responsible for 440.

Mizanur Rahman, former chairman of Bangladesh’s National Human Rights Commission, told BenarNews on Wednesday that, over the years, activists have urged the Bangladesh government to take action to stop these alleged extrajudicial killings.

“For the first time in history, U.S. senators have called for targeted sanctions against officials of a Bangladeshi entity. This is a sad development for us,” Rahman said.

The U.S. senators in their letter said that in addition to extrajudicial killings, United Nations experts, journalists and human rights groups have also documented cases of the RAB committing enforced disappearances and widespread torture.

In his 2017 statements in the U.S, Senate, Leahy, too, spoke of eyewitnesses who said they have seen RAB pick up people who are classified as disappeared.

Leahy said the government denied that people who were abducted were taken by RAB.

“Of course, the government would vociferously reject such a  characterization, insisting that individuals who have disappeared were kidnapped by militants or joined extremist groups or simply claiming that their whereabouts are unknown to the government,” Leahy said.

“The problem is that there is often credible eyewitness testimony to the contrary or those responsible for the abductions have identified themselves as members of one of the security forces, the RAB being the most notorious.”

Many victims of extrajudicial killing are also forcibly disappeared for days or months prior to being extra-judicially killed, Amnesty said in 2019.

“These cases illustrate a pattern of gross human rights violations for which the Rapid Action Battalion and its senior leadership have faced no consequences,” the senators’ letter said.

“We urge you to respond strongly to the RAB’s ongoing violations by using all applicable authorities to impose targeted sanctions on senior RAB commanders,” they wrote to Pompeo and Mnuchin.