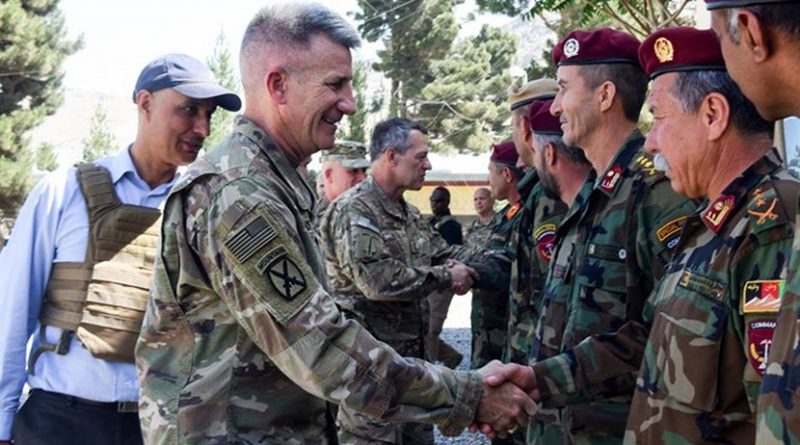 The new permissions available thanks to the South Asia strategy mean the campaign is on the “path to a win,” the commander of NATO’s Resolute Support mission and U.S. forces in Afghanistan told Pentagon reporters Tuesday.

President Donald J. Trump announced the strategy during a speech at Fort Myer, Virginia, in August.

Speaking via satellite from his headquarters in Afghanistan’s capital of Kabul, Army Gen. John W. Nicholson emphasized that the strategy is strictly conditions-based, not time-based.

“We will be here until the job is done,” the general said. “The U.S. approach aligns with the NATO approach. … War is a contest of wills. The president has left no doubt in terms of our will to win.”

In Afghanistan, the goal is reconciliation through a negotiated settlement lowering the level of violence, Nicholson said. Afghanistan and the coalition will use three forms of pressure to make this happen, he added: military pressure, diplomatic pressure and social pressure.

Afghan security forces will apply the military pressure, the general told reporters, aided by coalition advisors and air assets. That pressure will increase in the next year as new Afghan capabilities come on line and as U.S. and coalition advisers embed with smaller units, he said.

Meanwhile, he said, Afghan and coalition officials will apply diplomatic pressure on the enablers of the Taliban and the Haqqani networks, and social pressure will be applied through elections over the next two years. If done credibly, Nicholson said, these pressures will enhance the legitimacy of the government in the eyes of the people.

“In the face of this pressure, the Taliban cannot win,” Nicholson said. “Their choices are to reconcile, live in irrelevance, or die.”

The United States and coalition must realign resources and to execute this strategy, the general said. “I’d point out that the military effort is necessary but, by itself, not sufficient for success,” he said. “We must work together with all of the parts of the U.S. government and the coalition in order to be successful.”

Operations under the new permissions have already begun, as Afghan and coalition forces struck the source of the Taliban’s finances: the narcotics trade.

“In just over three days’ worth of operations, the Afghan 215th Corps, their special forces commandos, their air force, in close cooperation with U.S. forces, removed between $7 million and $10 million of revenue from the Taliban’s pocketbook,” Nicholson said. “And the overall cost to the drug trafficking organizations approached $48 million. So these strikes were just the first step in attacking the Taliban’s financial engine, and they will continue.”

Nicholson said the Taliban have evolved into a criminal or narco-insurgency. “They are fighting to defend their revenue streams,” he said. “They have increasingly lost whatever ideological anchor they once had. They fight to preserve and expand their sources of revenue. This includes narcotics trafficking, illegal mining, taxing people throughout Afghanistan, kidnapping and murder for hire: all criminal endeavors.”

The general noted that Afghan forces have stepped up. “We fought most of this year, through Aug. 21, at the lowest level of U.S. force and capability, and, therefore, the highest level of risk, in our 16-year war in Afghanistan,” he said. “Yet, in spite of that, the Taliban strategy was not successful. It was essentially defeated by the Afghans.”

In face of this, the Taliban have reverted to guerilla war, while Afghan forces have become more capable. Nicholson noted that Afghan President Ashraf Ghani often says the Afghans own the fight, and are proud to. “They are willing to fight and die for their future, their country, their families,” the general added. “And in so doing, they’re not only fighting on behalf of themselves, but they are fighting against the terrorists who have threatened our homeland and the homelands of our allies as well.”