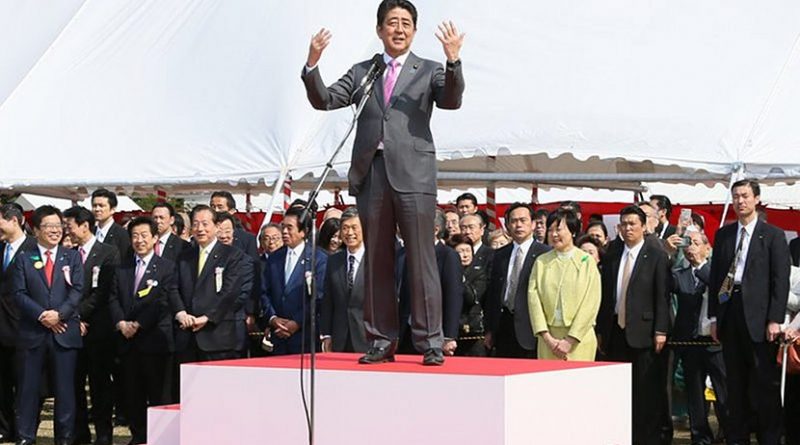 (FPRI) — I made my genuine Thanksgiving on October 27. The occasion was Mr. Abe’s crushing victory in the Japanese election; the reason was a genuine, though perhaps erroneous, sense that we had been spared a potentially ghastly war in Asia, by the rebalancing of regional power that victory brought.

Japan will now start deliberately rearming and aiding her neighbors, with the pace determined by China’s aggressiveness. If China does not abandon her current expansionist territorial policy, but rather attempts nuclear blackmail against her neighbors, at the end of the day, Japan will match that too, with her own nuclear force, checkmating China. This will bring an armed peace.

Since at least 1995 when she occupied the Philippine Mischief Reef, China has been attempting to expand her territory to include Arunachal Pradesh (“South Tibet” in Beijing’s terminology) in India and islands held by South Korea, Japan, the Philippines, and others, as well as to take control of the entire South China Sea, half again bigger than the Mediterranean.

China calculated that no one would react seriously. She was emerging as the hegemon of Asia; others would recognize this fact (which may not be one) and doff their caps, no more. Certainly, the United States would continue to do nothing. The Obama administration had done effectively nothing while this attempt to transform the Indo-Pacific region was being carried out.

China is also actively seeking bases in Africa and elsewhere, with a view to controlling the key choke points in the international maritime transport network. This is Griff nach der Weltmacht, with Chinese characteristics. A continuation of such aggressive behavior will almost certainly lead to conflict, escalation, and perhaps general war.

In 2010, sparks flew at the Association of Southeast Asian Nations summit, as Hillary Clinton delivered a strong verbal condemnation. Then, in 2014, the Philippines filed suit in The Hague, under The Law of the Sea, the authority of which China has ratified and accepted. In 2016, the International Court of Arbitration found that all of China’s actions were illegal. China, however, ignored the decision completely, continuing her expansive policy, assuming that she could divide her opponents, intimidating them above all with her immense military and nuclear capabilities.

This seemed to work. Rodrigo Duterte, an erratic man, became president of the Philippines, and he began to come to terms with China. It became bad form to mention The Hague’s decision. Having torn up the international court’s decision, China looked set to create a fait accompli by flouting the law to use military intimidation instead.

The United States began to take serious action with the new administration in office. When President Trump made his highly successful visit to Asia, he did not need to mention security, as an almost unprecedented three Carrier Strike Groups were exercising in the seas nearby, message enough.

The United States is far away, though, and not trusted by anyone to use nuclear weapons to defend them. That is why the United Kingdom and France, both allies, maintain at great expense their own independent nuclear deterrents. But Japan? She foreswore war in her Constitution. Not only that, the United States presented herself as the “cork in the bottle” that would prevent Japanese armament. The drastic changes that China started unilaterally, assuming Japan would dither, in fact focused that country’s attention.

With Abe’s victory, we may expect Japan to become normal, which is to say possess a self-sufficient military capability including, if so pressed, nuclear weapons that will deter China and freeze her current policy. A democracy, Japan can move only with the support of her people. China’s threats to her territory, as well as the firing of two North Korean ballistic missiles over the islands, contributed to Abe’s victory. Now, we can expect a carefully calibrated Japanese response that will match China at every stage.

What does Japan have now? Her self-defense force numbers at about 250,000. At present, she lacks any but defensive armaments. Even so, her advanced technological capabilities mean that she can develop herself any weapon she needs, as good or better as the American systems on which she now largely relies. Japan does not steal technologies. She already has her technologies.

The jewel in her crown is her small (19) submarine force. The Sōryū is a conventional submarine so stealthy that the highly skilled Japanese anti-submarine forces can find only 5% of them when under way. They regularly sink American carrier escorts (using lasers) in war games. More importantly, as retired Chinese General Liu Yazhou 劉亞洲, an adamant Japanophobe, has warned, in case of naval conflict today, the Japanese submarines could sink the entire Chinese East Sea fleet in four or so hours.[1] (Liu is also an outspoken advocate of democracy). As the Japanese ambassador remarked to this author, “We are a shadow nuclear power.” In other words, it might take them a week to create an arsenal.

Otherwise, Japan has a slightly obsolescent air force to which U.S. F-35s are being added. More importantly, she has a prototype sixth generation stealth fighter the X-2 “Shinshin.” Cynics say she is building this to force American prices down. That may have been correct in the past, but today she is building it so as to be self-sufficient in aircraft. I believe this will be a superb jet: remember, not until 1943 did the United States field a fighter that could down the Japanese Zero.

Japan has also been launching “Information Gathering Satellites” since 2003. The most recent, launched earlier this year, is thought to have resolving power far superior to any other nation’s. Japan has enlarged her intelligence service. Particularly in cooperation with Taiwan (below), Japan will achieve intelligence dominance in the region.

Japan has only very short-range missiles. Now, however, she has undertaken a program to build a maneuverable missile having sufficient range and payload to pose a severe problem to any adversary, and a 1,000 mile-range missile nicknamed the “Japanese Tomahawk” about which in fact we know very little.

In other words, Japan is now on the threshold of becoming a regional great power, not capable of attacking or invading her adversaries, but of paralyzing them by means of her advanced military capabilities. This fact transforms the Asian strategic situation. No longer will China be able to intimidate without fearing retaliation. The Hague decision will be proclaimed as justification, and who can gainsay the legitimacy of that?

Japan will become an Asian alliance focus in the emerging alliance—“The Quad”—of Australia, the United States, India, and Japan—hammered out, significantly, on the sidelines of this year’s ASEAN conference in Manila, so far China’s chief target. Also, she will become a non-U.S. source of advanced weaponry.

This last point—weapons supply—is particularly significant with respect to Taiwan. United States policy has always been to keep Taiwan weak enough that China can imagine conquest, yet fulfill the letter of the Taiwan Relations Act which requires us to supply defensive armament, by selling mostly obsolete or unwanted systems at great profit to our defense contractors. In fact, the loss of Taiwan, while it would be a crime against humanity, would not affect American security.

It would, however, mortally threaten Japan, whose main islands are 800 miles away, while her closest small island, Yonaguni, is less than 70 miles from the east coast of Taiwan. Japan and Taiwan are part of the same mostly submerged ocean mountain range. So we may expect Japan and Taiwan to cooperate in whatever ways are necessary to keep China at bay. If we continue to seek to please China even as we supply Taiwan with inadequate equipment, we may expect Japanese systems to fill the gap—submarines, naval vessels, state of the art aircraft. Not to mention close intelligence cooperation. Taiwan is often thought of as an American issue. Look at the map, though. It is a Japanese issue.

Finally, we must speak of diplomacy. Japan is widely distrusted, though this is perhaps a myth. Even South Korea, which was tortured brutally by Japan during the period she was a colony (1910-1945), maintains a high level of day to day security interaction with Tokyo. Japan’s diplomatic prowess is often underestimated, in part because she conceals it. But, particularly if aided by the United States and other “Quad” powers, she will show great effectiveness. “The Quad,” which China never imagined but was instrumental in creating as a counterbalance to her aggression, is more than a sufficient counterweight.

Note that China has created this situation for herself. She has no real allies: does anyone expect Russia or Pakistan to go to war on her behalf? Rather, by making such vast territorial claims from India to Japan (with the Russian Primorskii Krai, which controls the Pacific coast of Eurasia from Korea north on deck as the next), she has alienated, effectively, all her neighbors—here I include unstable Pakistan and opportunistic Russia—creating what political scientists would call a “countervailing coalition.”

Our greatest 19th century general, Winfield Scott, might have called it “an anaconda” that China has created, but in the toils of which she now finds herself. This entanglement will render impossible China’s miscalculated policies.

Note too that without China’s aid or at least acquiescence, North Korea would not be able to command the attention or elicit the fear that she does now. She is a dependent variable in this larger change, which will undermine and weaken her. South Korea is furthermore high on the list of nuclear capable states.

Actions elicit equal and opposite reactions, so Newton states. Clausewitz notes that unlike physical reactions, those in conflict, being the product of the human mind, are entirely unpredictable. When she set out on her ill-conceived expansion program, China wrote off both Japan and the United States. Now, they are at the heart of the game.

Of course, all of this could go wrong. The possibility of a war worse than any in history erupting in Asia remains with us. The developments outlined here, however, render that less and less likely, while a cold and peaceful standoff looks more realistic.

If such should turn out to be the case, we may date its onset from the Japanese election that has brought Abe to complete power. Now, our task is to create an alliance with Japan such as the late Ambassador Hisahiko Okazaki always advocated—as close as ours with the United Kingdom.

So let us celebrate a war that I believe has been averted!

One thought on “Spared A War: Abe’s Victory And Japan’s Rearmament – OpEd”