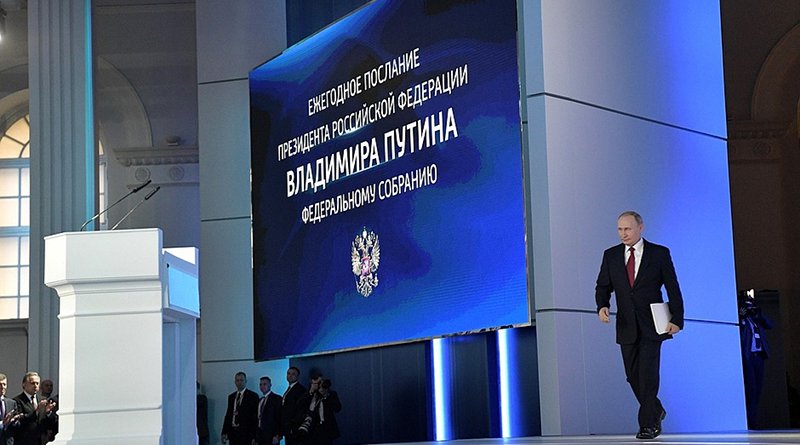 We’ve been digging in our own backyard for long enough, so for a change let’s look at what’s happening in the wide world. There’s no doubt that the events taking place in our neighboring land are significant, as they can affect us in the long-run.

I’m, of course, talking about the announcement made by Russian President Vladimir Putin on 15 January 2020 on amending the Constitution of Russia. Putin didn’t say when the constitutional referendum is to take place, but he did assert that the amendments will not affect the foundations of the constitution, and that’s why they can be approved by the parliament as part of the existing procedure by passing constitutional laws1. Keep in mind – Vladimir Putin is aware that he has lost some of the trust of the Russian public, so it’s better not to take unnecessary risks with the referendum. It may turn out to be a disaster, despite the regime’s enormous experience with falsifying election results.

Many have been waiting to see what Putin intends to do to remain in power after he is no longer president, but no one actually expected constitutional amendments. After the announcement, Putin’s long-standing peon and now former prime minister Dmitry Medvedev was in a bit of a shock.

Seems that Putin is so determined to remain in power, even Stalin would pat him on the back.

So what exactly does Putin want to amend and why?

The amendment package is quite substantial and concerns dealing with social issues, reinforcing the power of governors and the parliament, consolidating the role of the State Council and even determining the status of international law in Russia. Before we dive into the possible scenarios, we should note that Putin even established a working group, which is already actively engaged in drawing up the amendments. What will these amendments be? I have no doubt that they will unconditionally fulfill all of Putin’s wishes, because he is guided by the proclamation of his ideological father Stalin – cadres decide everything. You don’t have to do anything yourself, just appoint the right people to the right posts and they will do anything you want. Even better – it’ll actually look like democracy, because we know that it won’t be Putin who will officially decide what and how should be amended, it will be the working group, which has already proved it thinks exactly as its inventor.

The working group has announced that one of the key points is to consolidate the status and role of the State Council, which should be an independent structure effectively integrated in the state administration mechanism.2

So what functions will this State Council carry out? As the name suggests the State Council will ensure the coordinated operation of state institutions and decide the main directions of domestic and foreign policies, as well as socioeconomic development priorities. Up until now, it was exclusively the president who determined the main foreign policy course in Russia. The expected amendments will also foresee:

As you can see, social issues comprise a miniscule portion of the amendments, and it is safe to say that they were included for the sole purpose of enabling claims that the goal of the amendments is to improve the wellbeing of Russians.

Overall, it seems that Putin’s amendments to the Constitution of Russia are intended to restrict the powers and influence of the president over decision making, as well as to significantly decrease the number of persons eligible to run for president. I must admit, these are rather unexpected changes from a president who until now has not spared any efforts to concentrate all of the levers of power in his hand. The explanation? Quite simple.

Knowing that his tenure as president is soon coming to an end, it’s about time for Putin to think about his plans afterwards. We can propose several theories on what is the president’s reasoning.

First, Putin believes he is fulfilling the role of some sort of a messiah and that without him at the helm of Russia the country would cease to exist; second, by amending the constitution he is redistributing power and establishing for himself a post that will allow him to retain his influence. Putin assumes that this will protect him against an unfortunate turn of events, in case a president comes to power who will want to investigate the actions of his predecessor. There is no doubt that currently Putin is able to guarantee himself being appointed to some key position. It’s possible he will become the head of the State Council. Additionally, the working group has put forward, allegedly by its own initiative, a proposal that the Preamble of the Constitution of Russia should also contain the mission of fighting against the falsification of history.4

Unmistakably, this is the continuation of Soviet ideology, one that will now be reinforced in the constitution. I should add that in his rhetoric Putin has always followed the ideology of the USSR – both in terms of its tactics and the actual subject matter. One could argue – why should we care if a sovereign nation wishes to amend its constitution after an initiative by their president? Well, this does not concern us directly, but we should consider it when deciding our own course of action.

On the one hand, by remaining in a key position Putin will maintain his influence over internal and external processes, but on the other, this will make Russia even more unpredictable, because now crucial decisions will have to be made by more than one person. There is no doubt that in the initial period Putin’s opinion will be the dominant one, but as time passes this could change, for instance, when some of the supporting actors – although actually higher in rank – will have tasted power. They could start asking themselves – do we actually need this shadow behind the throne; maybe we can get rid of Putin and enjoy all of the fruits of power ourselves? It is too early to judge, but after comprehensively analyzing the available information regarding Putin’s amendments to the constitution, it looks less like democratization and more like Stalinization.

What should we do? It’s simple – observe and analyze the processes taking place in Russia, attempt to find links between these processes and our own politicians and continuously strengthen our external and internal security. The short-term situation after Putin’s departure will not be more safe and stable – it will most likely be even worse.