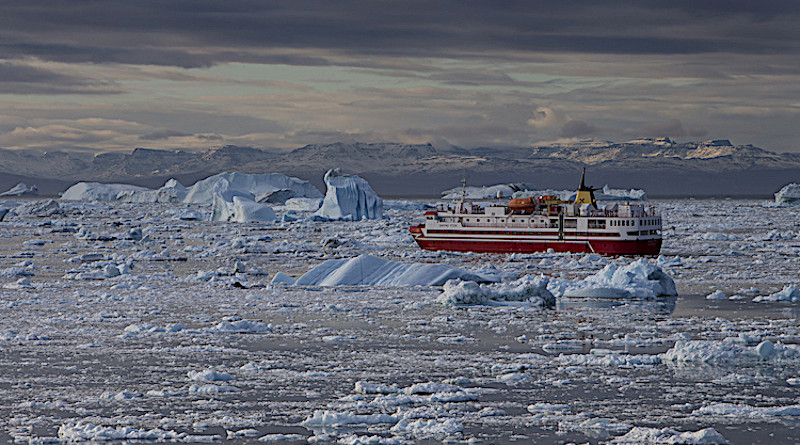 The risks of heavy fuel oil to the Arctic. Credit: HFO-Free Arctic

The polar region located at the northernmost part of Earth is warming at an accelerating rate and as sea ice continues to melt away, Arctic waters are becoming increasingly navigable to vessels carrying heavy fuel oil (HFO). HFO, which is one of the world’s dirtiest fuels, is not only virtually impossible to clean up in the event of a spill, but also produces higher levels of air and climate pollutants than other marine fuels.

Aware of the severe risks that heavy fuel oil poses to polar environments, the international shipping community has already banned its use in the Antarctic. But, as experts point out, it is now time to provide similar protection to the Arctic – an ecosystem that is equally vulnerable to disturbance and pollution.

Until recently, 76 per cent of the fuel used in Arctic shipping was HFO. Ships typically used heavy fuel oil with a sulphur concentration of 2.7 per cent. But the International Maritime Organisation (IMO) has ruled that from January 1, 2020, the maximum sulphur content of ships’ fuel oil would be 0.5 per cent instead of 3.5 per cent. Subsequently, fewer ships are now using HFO.

Known as “IMO 2020”, the reduced limit is mandatory for all ships operating outside designated Emission Control Areas such as the Baltic Sea, North Sea, North American area, the United States and the Caribbean Sea area where the limit is already 0.10 per cent.

The main reason why HFO has been used is its cost – it is cheap, easy to store and easy to transport. Vessels that spend long periods at a time in the Arctic are especially likely to be using the fuel. Some ships are fitted with exhaust gas-cleaning systems called scrubbers which are designed to remove sulphur, but if vessels are using open-loop rather than closed-loop scrubbers – as 80 per cent of ships do – the resulting effluent is discharged into the sea and is also polluting.

The pollutants have been found to be taken up by fish and crustaceans (crabs and the like), which are then passed on to humans when eaten.

The pollutants include poly-aromatic hydrocarbons (PAHs), which have been linked to bladder, skin, lung, stomach and liver cancers. Heavy metals are also released into the sea, and the sulphur removed by the scrubbers is discharged into the marine environment in the form of sulphuric acid.

Some of the pollutants, in particular the heavy metals and PAHs, can also build up in ocean sediments.

In a global context, some countries such as Belgium, Singapore and China, have imposed a ban on the use of open-loop scrubbers because of the pollution incurred. Instead, closed-loop scrubbers are used, in which wash water is purified and recirculated on board and the resulting sludge is disposed of at the next port.

New fuels have also been developed to respond to the sulphur cap. These blends are known as very low sulphur fuel oils (VLSFOs) and are a mixture of lighter and heavier fuels, the heavier fuels having been treated to reduce the sulphur content. But recent research from Finland and Germany indicates that some of these new fuels may be just as damaging to the environment as HFO because they emit greater quantities of black carbon.

On ships that have scrubbers installed, HFOs will still be used in Arctic waters, with the potential of oil spills that are hard to clean.

Most oil spills form slicks of oil. The lighter distillate oils will evaporate and disperse into the surrounding water within a matter of days, but HFO can solidify rapidly and form lumps of tar on the surface which can float, sink, settle on the ocean floor or even wash up on beaches. Very little HFO evaporates or disperses, and it can remain in the environment for months or even years.

The Clean Arctic Alliance, a global body consisting of 19 organisations, is pushing for the use of distillate fuels, which already meet emission requirements for sulphur. “Particulate filters could be used to reduce black carbon emissions by over 90 per cent,” says Dr Sian Prior, Lead Advisor of the Clean Arctic Alliance. But “particulate filters can’t be used with HFO – they won’t work as there is just too much black carbon produced when burning HFO”, she adds.

“The ocean has been absorbing large quantities of emissions, equivalent to 20-30 per cent of CO2 emitted by human activity since the 1980s. We should be trying to get to zero emissions by 2035 to have any hope to keep to 1.5 degrees global warming,” says Prior.

The IMO’s Marine Environment Protection Committee decided in 2019 to move forward on developing an HFO ban in the Arctic. A ban already exists on HFO use in the Antarctic. The IMO developed the proposal further in February 2020, when it agreed on the draft regulation.

But there are loopholes in the legislation proposed by the IMO, according to NGOs. Árni Finnsson from the Iceland Nature Conservation Association, which is part of the Clean Arctic Alliance, was at the February meeting. He says that these loopholes “mean the ban will not come into effect until 2029, leaving the Arctic exposed to the growing threat of HFO spills for close to another decade” Not only that, as “this will delay necessary decarbonization of shipping globally”.

At the same time, as the IMO proposed a limit of 0.5 per cent sulphur in shipping fuels, Iceland went a step further and introduced a ban on the use of heavy fuel oil in its territorial waters and a sulphur limit of 0.1 per cent.

However, fuels with higher concentrations of sulphur are allowed if scrubbers are used on board, and HFO may still be carried on board for use in the open sea, beyond Iceland’s territorial waters.

Prior points out that the risk of oil spills still exists as “it is still possible for vessels to carry HFO provided it is not used …  or use it [HFO] provided a scrubber is used to reduce the sulphur content of the exhaust emissions”.

In September 2019, an open-loop scrubber was in operation when an Icelandic cargo ship set off from Vestmanneyjar, the island just off the south coast of Iceland. According to the minutes from the council’s development and harbour committee, the wash water released into the sea was contaminated with sulphur and soot.

Prior, however, says this explanation sounds a little strange, “as the discharge from the scrubber would have contained many wastes including particulate matter (which includes black carbon), sulphur and probably PAHs and heavy metals”.

Are there penalties for ships found in breach of the Icelandic regulation? Helga Jonsdóttir, head of the Department of Oceans, Water and Climate at Iceland’s environment ministry, says that now “the Environment Agency is permitted to impose administrative fines on individuals and parties who breach clauses on the permissible maximum limit of sulphur in shipping fuels”.

Finnsson is sceptical about Iceland’s initiative. “I don’t see much use in the regulation set by the minister for the environment in December 2019. It is more like a way to find ways for Eimskip and Samskip [the Icelandic cargo companies] to continue polluting both air and water,” he says.

So, given that HFO will have to be carried on board even if distillates are used as fuel, what is the best solution for the Arctic? According to Prior, “the simplest and easiest solution is to ban both the use and the carriage of HFO as fuel – addressing comprehensively the HFO spill risk and reducing emissions of black carbon significantly”.