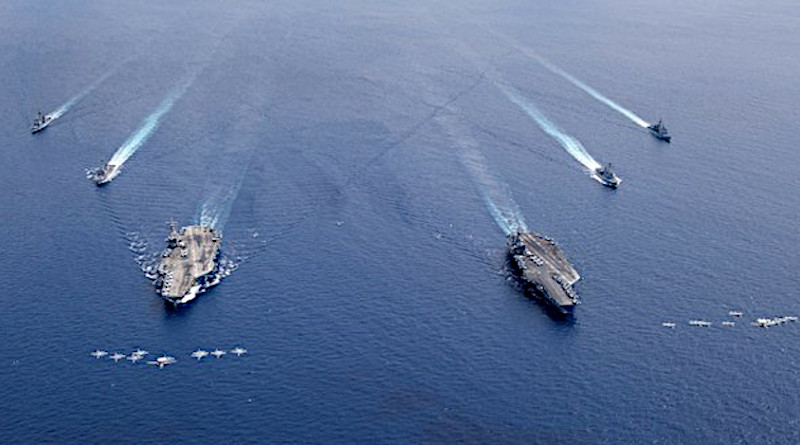 Planes from Carrier Wing 5 and Carrier Wing 17 fly in formation as the aircraft carriers USS Nimitz and USS Ronald Reagan, and other ships sail together in the South China Sea, July 6, 2020. Courtesy U.S. Navy

In response to “What Options are on the Table in the South China Sea” by Zack Cooper and Bonnie S. Glaser, one must ask should the U.S. put its military muscle where its mouth is on the South China Sea — and if it does — what are the likely consequences?

On July 13, US Secretary of State Mike Pompeo declared that the U.S. considers China’s interference with Southeast Asian countries’ fishing or oil exploration and exploitation in their legitimate maritime zones– and its own exploration/ exploitation there– to be “unlawful” and “bullying”.

This was not really new but it was a specific reassurance to Southeast Asian claimant states that the U.S. has their back vis a vis China. The political core of the statement is the declaration that “America stands with our Southeast Asian allies and partners in protecting their sovereign rights to offshore resources­. ­The world will not allow Beijing to treat the South China Sea as its maritime empire.”

These are bold and belligerent words. US-China relations and stability in the South China Sea will depend in large part on whether and how the U.S. attempts to back them up.

Cooper and Glaser are among those analysts that think—or hope—that this new policy nuance regarding the South China Sea “clears the path for US policies to support allies and partners in their efforts to rebuff Beijing’s coercive maritime practices.”

If the U.S. tries to enforce the statement’s specifics or rival claimants test the U.S verbal backing, this ‘new’ policy will likely increase both tensions and dangerous incidents –intended or not.

Indeed, some think that the policy’s enforcement will stimulate China to “step up [its] challenges against … US activities” there.

Chen Xiangmiao of China’s National Institute for South China Sea Studies thinks that “if there is a maritime clash with Vietnam, Malaysia or the Philippines, the U.S. will have an excuse to step in, and that could trigger a direct military conflict between China and the U.S”.

The milquetoast expression of gratitude by eight ASEAN ambassadors for a US Congressional committee’s reiteration that international law and the UN Convention on the Law of the Sea should apply in the South China Sea was hardly a full throated endorsement of a US threat of use of force there to back up its policy.

Nevertheless, Cooper and Glaser postulate such “will be welcomed in Southeast Asia.”  They specifically suggest that the US “conduct patrols to challenge or expel fishing boats or oil and gas exploration vessels operating in other states’ exclusive economic zones”.  Such an action would not only likely engender a proportional Chinese response, but with the exception of Vietnam, it may not even be desired by the very countries whose rights it professes to be protecting.

A recent incident was instructive. On April 18, a Chinese survey ship accompanied by coast guard and maritime militia vessels approached a disputed area where a drill ship – the West Capella – was operating under contract to Malaysia’s national oil company Petronas. The US sent warships to the vicinity – apparently without without invitation, consultation or notification.

Malaysia requires prior permission for foreign military activities in its EEZ—a requirement that the U.S. does not recognize and has previously challenged with “freedom of navigation operations “. As the U.S. warships steamed toward Malaysia’s EEZ, its decision makers could not be sure whether the U.S. was coming to their aid, or challenging their maritime claims.  Malaysia’s Foreign Minister Hishammuddin Hussein said in reference to this incident, “While international law guarantees the freedom of navigation, the presence of warships and vessels in the South China Sea has the potential to increase tensions that in turn may result in miscalculations which may affect peace, security and stability in the region.”

More generally many Southeast Asian states are already deeply worried about US projection of power in the region. They see it as risking conflict from which they will suffer. After one incident in October 2018, Ng Eng Hen, Defense Minister of Singapore, a US Strategic Partner, said that “Some of the [US-China] incidents are from assertion of principles, but we recognize that the price of any physical incident is one that is too high and unnecessary to either assert or prove your position.”

Philippines President Rodrigo Duterte has said that “…the threat of confrontation and trouble in the waterway came from outside the region.”

Then Malaysian Prime Minister Mahathir Mohamad argued that “big warships [in the South China Sea] may cause incidents and that will lead to tension.”

In response to the US statement, Malaysia’s new Foreign Minister Hishammuddin Hussein called for the big powers “to avoid military posturing”.

Indonesia’s Foreign Minister Retno Marsudi has said that it is “important for ASEAN to keep sending out messages to great powers involved in the dispute to maintain regional peace and stability in the South China Sea”.

Considering previous relevant statements by high-level Indonesian government officials, this appears to be a plea to both China and the US to back off and exercise more restraint in their military operations in the region.

Some regional analysts also see the ‘new’ policy as having a potential downside.  To Shariman Lockman of Malaysia’s Institute of Strategic and International Studies, the U.S. presence is a “double-edged sword” that has “the effect of both deterring but also potentially escalating matters with China … The worst-case scenario is for things to escalate, and then the U.S. gets distracted by something in the Middle East, and we get saddled with more Chinese ships in our waters.”

There is another side of the coin. As former US National Security Council senior director for Asia Michael Green warns, another possible danger of the new policy is that it could “tempt smaller states to do things that could provoke Beijing and we would then own.”

Already there has been some dangerously confusing follow up to the statement.  US Ambassador to Vietnam Daniel Kritenbrink signed a Memorandum of Understanding that the U.S. will “support its fishers against intimidation.”

Did he mean — as the article implied — that the U.S. military would actually intervene on behalf of Vietnam? If he did, and it includes its fishing around the China-occupied Paracels, this could be interpreted as an expression of support for Vietnam’s claim to sovereignty over the islands and their waters.  This could be crossing a “red line” and likely lead to a clash and worse. I assume this is not what was meant but it is an example of what can happen if the U.S. goes down this road.

According to Cooper and Glaser, the “US policy has wisely moved beyond simply protecting freedom of navigation to defending freedom of the seas and the maritime rights of all nations in the South China Sea”. But US military operations in the South China Sea were never about defending freedom of commercial navigation which has not been threatened by China. Rather they are about asserting what the U.S. views as the right of its military vessels and aircraft to sail, fly and collect intelligence almost any where they want –even if some violate China’s laws and the UN Convention on the Law of the Sea. The US purposely conflates these two “freedoms’ and obscures this difference.

They also suggest that “American leaders explore ways to help regional states impose penalties on China for causing severe harm to the coral reef environment and violating its obligation under the UNCLOS  to preserve and protect fragile ecosystems and the habitats of endangered species”. It is true that an arbitration panel found China guilty of this. But that means it is up to the plaintiff — the Philippines — to pursue damages, and it has so far chosen not to do so.

Any new charges brought by others would be remarkably hypocritical. All occupiers of features in the South China Sea have damaged the reefs and their fragile ecosystems and continue to do so. The damage caused by China is on a greater scale but they are all guilty of the same environmental ‘crime.’

The bottom line is that China may not be cowed by a show of force — by anyone.  As leading Australian pundit Hugh White says, Beijing seems increasingly unconvinced “that America has the will to actually go to war with China.”

This will be increasingly so as China’s domestic nationalism and military and economic power grow and America continues to be distracted by domestic issues and its foreign policy to be in disarray.  Moreover, China’s body politic has become increasingly nationalistic and any national loss of face like a US-forced public climb-down could trigger a crossed ‘red line’ response.

Usual advocates of a more muscular US response to China in the South China Sea are now expressing concern that attempts to implement the new policy may result in a clash with China there.  Prominent China critic Greg Poling thinks that “it might lead China to double down out of a sense of nationalism”.

Oriana Skylar Mastro writing for the Council on Foreign Relations observes that “China could see military action as its only recourse if it loses the diplomatic option to assert its sovereignty claims”.

Cooper and Glaser claim the policy statement is “smart and a carefully crafted move”. Rather than being “smart”, this policy nuance creates a dilemma for the U.S. which it had until now avoided by ambiguity. Now it must either back up its words and risk conflict — even war — with China, or lose more credibility regarding its staying power and commitment to friends, allies and the region. Worse, it makes U.S. policy implementation subject to the adventures of others — like Vietnam.

The reality is that this policy statement was an unnecessary last gasp of a dying administration. Its continuity — let alone follow-up — are in serious doubt. Surely, at this critical time in world affairs, the U.S. has better things to do with its military than police the EEZS of so-called ‘friends’ halfway around the world –and perhaps start a conflict with a great power in the process.

Home » Should US Put Its Military Muscle Where Its Mouth Is On The South China Sea? – Analysis