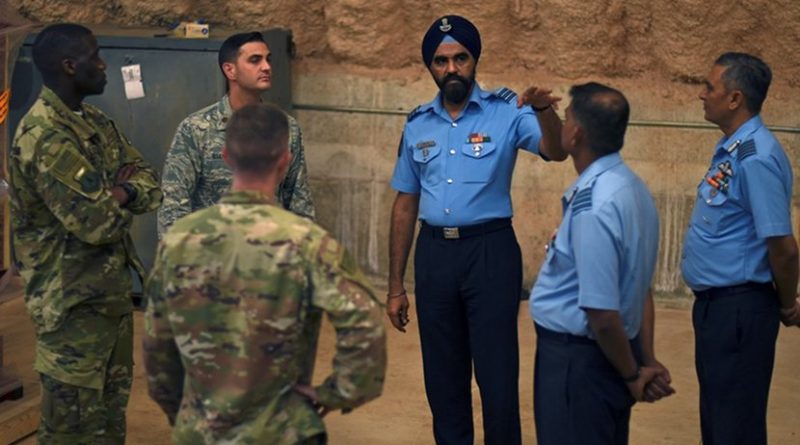 American and Indian airmen learn from each other on Andersen Air Force Base, Guam, July 23, 2018. Defense and diplomatic leaders from both countries will meet in New Dehli in September to discuss opportunities for cooperation. Air Force photo by Airman 1st Class Gerald R. Willis

Next week’s “two-plus-two” meeting of defense and diplomatic leaders in New Delhi will seek to deepen cooperation between India and the United States and bolster programs and policies to maintain the free and independent Indo-Pacific region that has been in place since World War II, the assistant secretary of defense for Asian and Pacific security affairs said.

It is the first such meeting between the nations.

The outreach to India – the largest democracy in the world – is the outgrowth of more than 20 years of diplomacy reaching back to the Clinton administration, Schriver said. At its heart is ensuring conditions for a free and independent region.

“We believe countries should have complete sovereign control of their countries, to make decisions from capital free from coercion [and] free from undue pressure. We also mean free, open and reciprocal trade relationships,” he said. “By ‘open,’ we’re talking about open areas for commerce, for navigation, for broad participation in the life of the region commercially and economically.”

Schriver talked about “operationalizing” the areas of convergence between the two nations. Some of these areas will be in defense, some will be economic, and others will be political, he said, noting that the principals will discuss this at the meeting.

China is the elephant in the room. Though U.S. policy is not aimed at any specific nation, Schriver said, “China is demonstrating that they have a different aspiration for the Indo-Pacific region. This manifests in their economic strategy, the Belt and Road Initiative, their militarization of the South China Sea, a lot of the coercive approaches to the politics of others.” The Belt and Road Initiative is Chinese investment in infrastructure projects in countries that lie between China and Europe.

At the meeting, officials will examine how and where the United States and India can work together, Schriver said, adding that he sees both countries’ efforts complementing each other in some nations of the region and closer cooperation on the security side.

“We’ve seen exercises – not just bilateral India-U.S. exercises, but multilateral exercises,” he said. “Obviously, you exercise for a reason. You exercise to improve the readiness and training of your own forces, but you think about contingencies, you think about real-world possibilities.”

The substance of the meeting will be discussions about regional and global issues, but there will also be concrete outcomes, Shriver said.

“We’re working on a set of enabling agreements,” he said. “Collectively, what they will allow us to do is have secure communications, protect technology, protect information. Getting those agreements in place will allow security assistance cooperation to go forward, allow us to exercise and train in more meaningful ways. I think we are going to expand the scope of some of our exercises – increase the complexity and elements that will participate.”

Schriver said discussions also will look at the situations in Russia, Afghanistan, Iran and Pakistan.