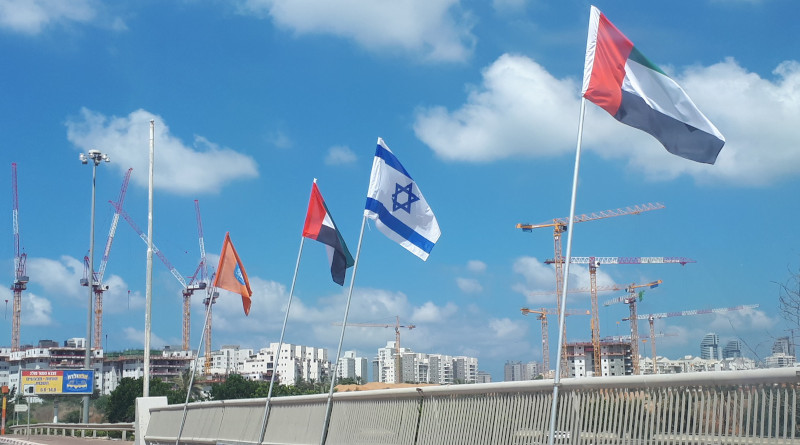 Flags of Israel and the United Arab Emirates (UAE), together with the flag of Netanya, flown on Netanya's "Peace Bridge" over Highway 2, Netanya, Israel. Photo Credit: TaBaZzz, Wikipedia Commons

The royal decree will allow individuals and companies in the UAE to sign deals and agreements with entities in Israel. It will also establish trade between the two states.

Israel on Friday listed its first commercial flight to Abu Dhabi, with national carrier El-Al flying the route on August 31.

In May, an Etihad Airways plane flew from the UAE to Tel Aviv to deliver supplies to the Palestinians to help fight coronavirus, marking the first known flight by an UAE carrier to Israel.

The UAE and Israel on August 13 reached a historic deal, brokered by US President Donald Trump, to fully normalize bilateral diplomatic relations and making the Gulf nation the third Arab country to formalize ties with Israel.

A joint statement from the UAE, Israel and the US said: “This historic diplomatic breakthrough will advance peace in the Middle East region and is a testament to the bold diplomacy and vision of the three leaders and the courage of the United Arab Emirates and Israel to chart a new path that will unlock the great potential in the region.”