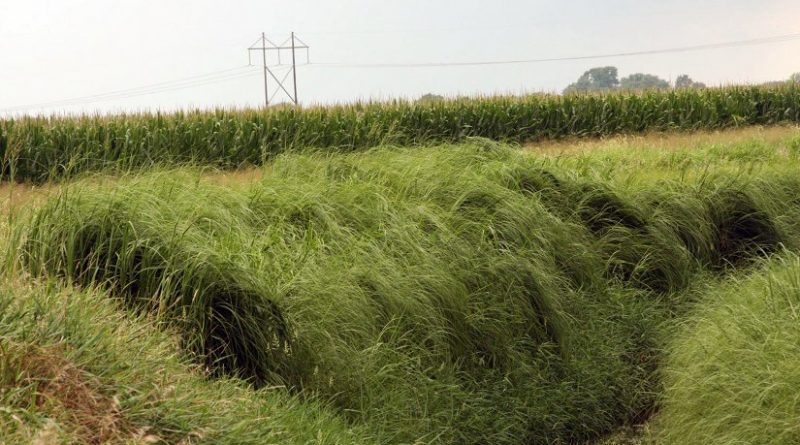 March 2012 was unusually warm. Biomass crops around the Midwest were well established and thriving. But when a late frost came in mid-April, all of that changed.

“When I went out in the morning, I was just shocked,” said University of Illinois agronomist D.K. Lee. “All the grasses were covered in frost. By noon, Miscanthus and switchgrass had turned black. The only plant that was untouched was prairie cordgrass.”

Lee already knew that prairie cordgrass, Spartina pectinata, was especially tolerant of flooding and salt stress, but this discovery confirmed his suspicion that cordgrass was tolerant of freezing, too. Being tolerant of environmental stress factors is important for biomass crops, because they are often grown on so-called marginal land where conditions are far from perfect. With its tolerance of several major stress factors, cordgrass has the potential to be grown in more places than other perennial energy crops.

The next step for Lee and his research group was to identify the molecular changes that keep cordgrass perky in cold weather.

“Unlike salt and flooding stress, freezing usually happens abruptly. The plant has to react quickly. To find out what was happening at the molecular level, we grew cordgrass in a growth chamber at 25 degrees Celsius and then abruptly moved them into another growth chamber set to -5 degrees.”

“We looked at gene expression within five minutes after exposure to freezing temperatures. We found some unique genes being activated right away and then different ones turning on 30 minutes later,” Lee said.

The team suspects that the initial genetic response protects the cells from freezing. Typically, ice crystals form in the spaces outside the cell when a plant is exposed to freezing temperatures. Once these “seed crystals” form, they grow quickly and burst the living cells. To avoid this, cordgrass may quickly pump ions outside the cell, keeping ice crystals from forming or growing. The secondary reactions that occur after 30 minutes may have to do with repairing damaged cells, allowing the plant to recover more quickly.

Lee said the findings just scratch the surface; much more needs to be done to fully understand the genetic mechanisms that allow cordgrass to avoid tissue damage during freezing temperatures. Once the system is fully understood in cordgrass, the hope is that it can be applied to other crops.

“Corn farmers are always looking to plant earlier in the spring,” Lee said. “They think if they plant early, they could see a yield benefit. Currently, crop insurance won’t cover corn if farmers plant before a certain date, because there’s a big risk of frost. If we understand more about freezing tolerance, we could eventually apply it to annual crops and potentially expand the production area for crops such as corn.”