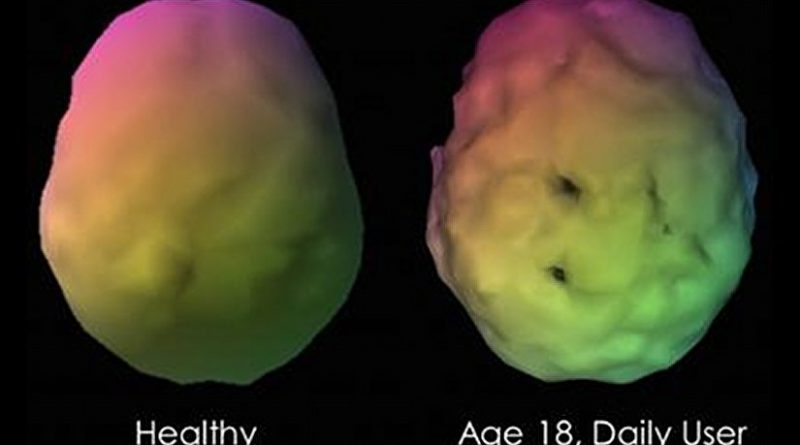 This shows a sample case of a visual 3-D rendering of a baseline SPECT scan of a longstanding marijuana user compared to a control subject. The marijuana user has multiple perfusion defects with lower perfusion shown as scalloping and gaps in perfusion of the temporal and parietal areas. Credit: Journal of Alzheimer's Disease

As the U.S. races to legalize marijuana for medicinal and recreational use, a new, large scale brain imaging study gives reason for caution.

Published in the Journal of Alzheimer’s Disease, researchers using single photon emission computed tomography (SPECT), a sophisticated imaging study that evaluates blood flow and activity patterns, demonstrated abnormally low blood flow in virtually every area of the brain studies in nearly 1,000 marijuana users compared to healthy controls, including areas known to be affected by Alzheimer’s pathology such as the hippocampus.

All datawere obtained for analysis from a large multisite database, involving 26,268 patients who came for evaluation of complex, treatment resistant issues to one of nine outpatient neuropsychiatric clinics across the United States (Newport Beach, Costa Mesa, Fairfield, and Brisbane, CA, Tacoma and Bellevue, WA, Reston, VA, Atlanta, GA and New York, NY) between 1995-2015. Of these, 982 current or former marijuana users had brain SPECT at rest and during a mental concentration task compared to almost 100 healhty controls. Predictive analytics with discriminant analysis was done to determine if brain SPECT regions can distinguish marijuana user brains from controls brain. Low blood flow in the hippocampus in marijuana users reliably distinguished marijuana users from controls. The right hippocampus during a concentration task was the single most predictive region in distinguishing marijuana users from their normal counterparts. Marijuana use is thought to interfere with memory formation by inhibiting activity in this part of the brain.

According to one of the co-authors on the study Elisabeth Jorandby, M.D., “As a physician who routinely sees marijuana users, what struck me was not only the global reduction in blood flow in the marijuana users brains , but that the hippocampus was the most affected region due to its role in memory and Alzheimer’s disease. Our research has proven that marijuana users have lower cerebral blood flow than non-users. Second, the most predictive region separating these two groups is low blood flow in the hippocampus on concentration brain SPECT imaging. This work suggests that marijuana use has damaging influences in the brain – particularly regions important in memory and learning and known to be affected by Alzheimer’s.”

Dr. George Perry, Editor in Chief of the Journal of Alzheimer’s Disease said, “Open use of marijuana, through legalization, will reveal the wide range of marijuana’s benefits and threats to human health. This study indicates troubling effects on the hippocampus that may be the harbingers of brain damage.”

According to Daniel Amen, M.D., Founder of Amen Clinics, “Our research demonstrates that marijuana can have significant negative effects on brain function. The media has given the general impression that marijuana is a safe recreational drug, this research directly challenges that notion. In another new study just released, researchers showed that marijuana use tripled the risk of psychosis. Caution is clearly in order.”

Home » Marijuana Users Have Low Blood Flow To The Brain