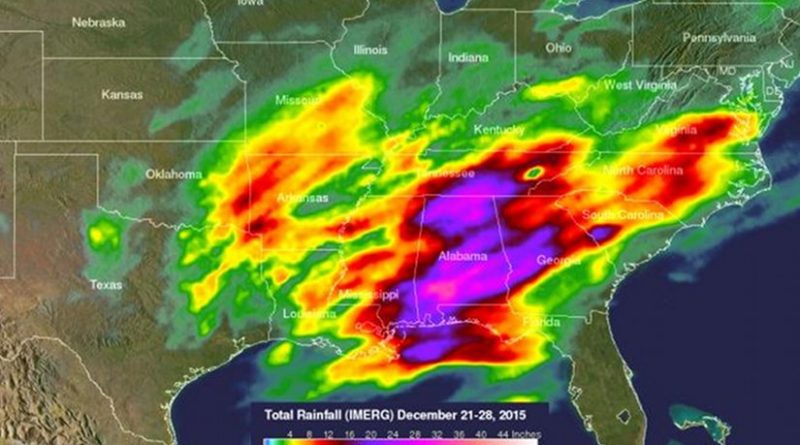 NASA’s Global Precipitation Measurement or GPM mission core satellite analyzed extreme weather that affected the U.S. over the course of five days. Heavy rainfall, flooding and tornado outbreaks affected areas of the United States from the Southwest through the Midwest from Dec. 23, 2015 to Dec. 27, 2015.

GPM is an international satellite mission between NASA and the Japan Aerospace Exploration Agency to provide next-generation observations of rain and snow worldwide every three hours.

An analysis was made of the rainfall that occurred during the period from Dec. 21, 2015 to Dec. 28, 2015. This analysis used data generated by NASA’s Integrated Multi-satellitE Retrievals for GPM (IMERG). This analysis showed that during the past week the highest rainfall totals of almost 938 mm (36.8 inches) were measured by IMERG in the state of Alabama.

The GPM satellite passed above a line of tornadic thunderstorms moving through the Midwest on Dec. 23, 2015 at 2232 UTC (5:32 p.m. EST). GPM’s Microwave Imager (GMI) and Dual-Frequency Precipitation Radar (DPR) instruments had an excellent view of the violent weather occurring near the center of the satellite’s swath. The supercell thunderstorm that moved from northern Mississippi into Tennessee generated two tornadoes. Fourteen deaths alone occurred with tornadoes that hit Benton, Mississippi on Dec. 23, 2015.

GPM’s Radar (DPR Ku band) revealed the intensity of thunderstorms within this line of powerful storms. Many of those thunderstorms contained heavy showers that were returning 45 dBZ values or greater to the satellite (dBZ values (decibels of Z) represent the energy reflected back to the GPM satellite). At NASA’s Goddard Space Flight Center in Greenbelt, Md. the data was used to create a color enhanced 3-D view of the GPM radar’s slice through the line of storms.

The low pressure area that brought the severe weather moved into the Great Lakes region on Dec. 29, 2015 bringing rain and snow from the Middle/Upper Mississippi Valleys across the Great Lakes and into New England.

Home » NASA Looks At Deadly Weather Over The US