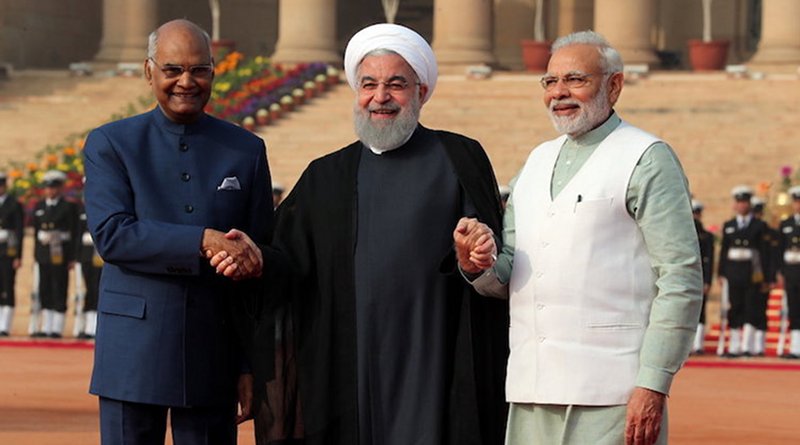 In the face of the United States withdrawing from the Iran nuclear deal and adopting a ‘maximum pressure’ policy against Iran, Tehran is turning to China and India to circumvent US sanctions. In response, the United States is trying to deny Iran’s access to Chinese and Indian resources to pressure Iran into returning to the negotiation table.

Both China and India have long had the potential to become strategic partners to Iran, but efforts to establish such partnerships were undermined by the United States. Yet the idea of strategic partnerships remains alive due to the geopolitical and geo-economic factors that link China and India to the Persian Gulf, Afghanistan and Central Asia. A review of the dynamics of Tehran’s relations with Beijing and New Delhi suggests various avenues of cooperation in the face of U.S. policies against Iran.

Beijing is showing a hesitant willingness to continue working with Tehran. China continued to import Iranian oil despite U.S. sanctions and news leaked about negotiations over China’s prospective investment of US$280 billion in Iran’s oil and gas industry. Replacing the dollar with the renminbi as a transactions currency has facilitated China-Iran trade and financial cooperation.

To cope with the U.S. policy of containment, China relies on Iran to diversify its energy supply. The majority of China’s oil imports currently pass through the Strait of Malacca, which is controlled by U.S. allies in Southeast Asia. China can overcome this strategic predicament if Iran’s gas flow is connected to the Gwadar Port pipelines in Pakistan. This explains China’s readiness to invest in the development of the southeastern Iranian port of Chabahar from which Beijing can also access Afghanistan, Central Asia and Russia.

Iran also wants India’s support to counter U.S. pressures. India preceded China in establishing constructive strategic ties with Iran. During the 2000s, Iran-India relations experienced unprecedented progress that led to India’s pledging to invest in Iran. Back then, Iran was trying to counterbalance the United States after it included Iran, with Iraq and North Korea, in the ‘axis of evil’.

The U.S. invasion of Iraq after Afghanistan alarmed Iran further and pushed it to strengthen ties with second-tier powers, including India. India found developing ties with Iran beneficial. The International North-South Transport Corridor could connect India to Central Asia and Russia, and Iran could increase India’s influence in the Arabian Sea. Strategic and economic reasons to establish a partnership between Iran and India still persist. India has strategic interests in developing ties with Iran and is the greatest investor in Chabahar’s development.

In theory, India-Iran cooperation should be easier than that of China-Iran. Washington is more tolerant of India’s deepening relations with Iran as its interests in the Indian Ocean, the Arabian Sea and the Persian Gulf are best served if India and Iran work together.

With U.S. troops leaving Afghanistan, India can protect U.S. interests by fighting terrorism and strengthening the central government in Kabul. This would be difficult to achieve unless India has easy access to Afghanistan. Given the rivalry between India and Pakistan, Iran remains the best route that connects India to Afghanistan. This explains the United States’ decision to waive sanctions on India’s investment in Chabahar.

But in practice, India is showing reluctance to work with Iran after the United States’ withdrawal from the nuclear deal. India stopped purchasing Iranian oil in May 2019 and reduced the budget allocated to the development of Chabahar. Financial arrangements to facilitate trade between Iran and India are in flux, meaning that importing Indian medicine, food and other commodities will become more difficult for Iran. The major problem was that the suppliers of the equipment that Chabahar needs were not willing to make deliveries because they feared adverse impacts on their business with the United States.

Tehran is convinced that India cannot be the partner it needs to counter U.S. sanctions. India owes its rising power status, in part, to its increasingly close relationship with the United States. No matter how valuable Iran is for India, New Delhi would not endanger its relations with Washington for the sake of preserving its friendship with Tehran.

Although Iranians are well aware that Beijing would not sacrifice its relations with the United States for its partnership with Iran, they still believe that China will support Iran more strongly than India. China’s continuing trade with Iran and the purchase of Iranian oil is proof of that.

From an Iranian perspective, China’s rise is quite different from that of India’s. India’s economic and military development contributes more to preserving the pro-U.S. international status quo, while China’s rise is seen to come at the cost of the United States’ global position and points towards a balanced global power distribution.

Still, Iranian public opinion does not support a close partnership with China. If Iran–China ties grow substantially and quickly, the Iranian government is likely to find it difficult to convince its people that the independence from the West that they gained so expensively will not be lost to dependence on China.

*Mohammad Soltaninejad is Assistant Professor of Middle East studies at the University of Tehran. This article appeared in the most recent edition of East Asia Forum Quarterly, ‘Economics and security’, Vol. 11 No. 4.